US seeks backing for action to end Libya bloodshed 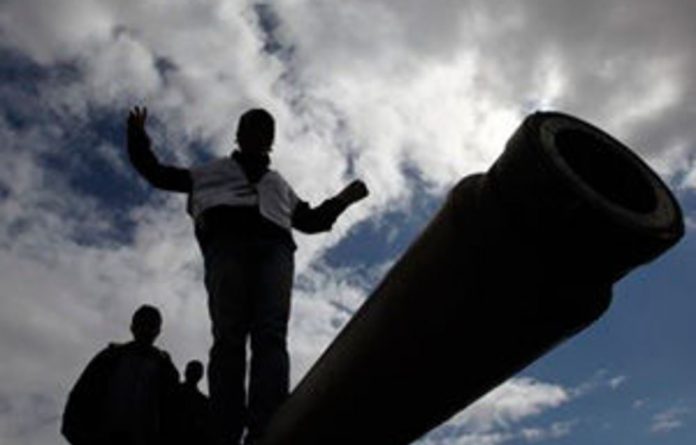 The United States sought to drum up international backing for ways to stem the bloodshed in Libya as forces loyal to Moammar Gadaffi waged fierce gun battles with opposition rebels holding cities near the capital.

US President Barack Obama consulted the French, British and Italian leaders late on Thursday on immediate steps against Gadaffi over his bloody crackdown on a popular uprising in which up to 2 000 people may have died, according to French estimates.

As oil prices leapt towards $120, stoking fears the fragile global economic recovery could be threatened, Washington, which once branded Gadaffi a “mad dog”, said it was keeping all options open, including sanctions and military action.

However, coordinated international action against Gadaffi, who has ruled the oil-rich desert nation of six million for 41 years, still seemed some way off, as foreign governments focused on evacuating thousands of their citizens trapped by the unrest.

With the Middle East still absorbing the aftershocks from the overthrow of veteran, Western-backed leaders in Tunisia and Egypt by people power, Western governments are also concerned not to be seen to be imposing neo-colonial solutions on Libya.

Disparate opposition forces were already in control of major centres in the east, including the second city Benghazi. Reports of the third city Misrata, as well as Zuara, in the west also falling brought the tide of rebellion closer to Gadaffi’s power base — though information from western Libya remained patchy.

Little opposition organisation exists in Libya after four decades of oppression, so the nature of the new ruling orders in eastern cities is still unclear. There was little sign of radical Islamists among the lawyers, doctors, tribal elders and army officers who made up committees trying to bring order.

Gadaffi defiant
But Gadaffi, appealing for calm on Thursday in a telephone call to state television, blamed the revolt on al-Qaeda leader Osama bin Laden. He also said the protesters were fuelled by milk and Nescafé spiked with hallucinogenic drugs.

His opponents, including some in the capital Tripoli where many kept off the streets for fear of violence, said the latest public appearance by the 68-year-old showed he was out of touch.

“Their ages are 17. They give them pills at night, they put hallucinatory pills in their drinks, their milk, their coffee, their Nescafé,” Gadaffi said of the rebels fighting his forces.

His apparently conciliatory tone contrasted sharply with his raging defiance two days before when he vowed on television to crush the revolt and die a “martyr” in Libya, unlike the leaders in Egypt and Tunis ousted in past weeks by mass uprisings.

Amid reports of Gadaffi and his sons deploying African mercenaries and their own clansmen, all with little to lose if the old order is to collapse, a former minister who bolted Gadaffi’s Cabinet this week said he believed Colonel Gadaffi would “do what Hitler did” and take his own life if cornered.

Asset seizure
As growing numbers of Libyan officials, including Cabinet ministers and ambassadors, reportedly deserted Gadaffi, the Swiss government said it was freezing assets of his family.

Libya’s foreign ministry denied that the leader had any such funds and said it would sue Switzerland for saying so. London’s Daily Telegraph newspaper said in an unsourced report that Britain may seize about $30-billion held in Britain.

Diplomatic differences emerged even in a push by Western states to suspend Libya from the low-powered UN Human Rights Council, which met with strong resistance from Arab and some other Islamic states, as well as from Russia and Cuba.

Obama is sending Secretary of State Hillary Clinton to Geneva on Monday to push the UN body to condemn Libya.

Gadaffi’s grip on power could depend in part on the performance around Tripoli of an elite military unit led by one of his younger sons, US and European officials and secret diplomatic cables obtained by WikiLeaks showed.

Libya’s 32nd Brigade, led by Gadaffi’s son Khamees, is the most elite of three last-ditch “regime protection units” totalling about 10 000 men in all, which are better equipped and more loyal to Gadaffi than the rest of the military, which has seen heavy desertion, officials said.

A witness told Reuters the unit had attacked anti-government militias controlling the town of Misrata, 200km east of Tripoli, killing several people, although residents said the government forces were beaten back by lightly armed local people.

Oil pressure
After decades of shunning Gadaffi, accusing him of supporting anti-Western militant groups around the world, the Western powers had in recent years embraced the flamboyant leader with a penchant for flowing robes and female bodyguards.

Gadaffi was particularly reviled after the 1988 Pan Am airliner bombing over Lockerbie, Scotland. A defecting minister said this week that he had evidence Gadaffi did order the attack, in which 270 people were killed.

His ending of some weapons programmes and cutting of overt ties with international militants, especially following the US overthrow of Iraq’s Saddam Hussein in 2003, led to cooperation with Western companies on developing oilfields.

Oil prices have surged to two-and-a-half year highs on fears the unrest could spread to other oil-producing countries and choke supplies. That may jeopardise a global economic recovery.

Bank of America Merrill Lynch said crude production in Libya, which supplies nearly 2% of world oil output, was expected to shut down completely and could be lost for a prolonged period of time. Saudi Arabia is prepared to try to fill the gap in supplies, Saudi sources said. – Reuters