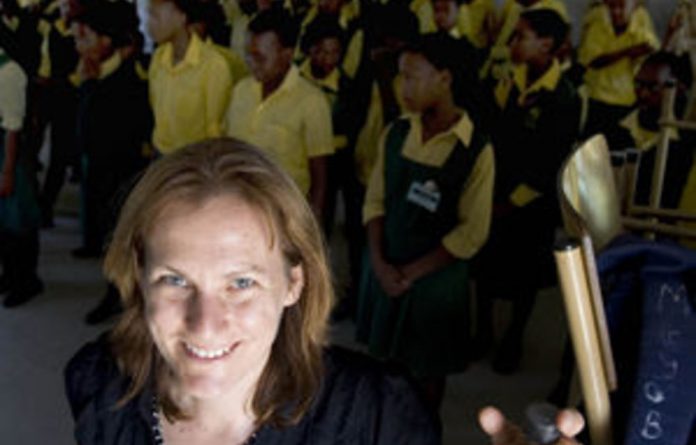 Shirley Apthorp is opera critic for the Financial Times and is based in Berlin.

Over the past decade and a half she has developed an extensive network among the musical fraternity of directors, conductors, orchestra managers and musicians in the European Union, something she now hopes to put to work for the benefit of musical education in South Africa.

The Cape Festival is a showcase for a number of initiatives, including the Cape Festival Music Development Forum, the Strings Exchange, the Good Hope Choir pilot project, concerts, workshops and international collaborations.

It seems that South Africa is still lacking access to Europe’s cultural institutions.
South Africa feels very isolated, geographically of course, but recent history and the cultural boycott have contributed to that. Other priorities also mean that the art scene here is very isolated and connections that are made often seem fairly random. There will be a partnership with a small provincial company somewhere in the EU and you’ll wonder, why?

As the opportunity arose perhaps?
Random, yes — it doesn’t seem to be strategic. I’ve always had a feeling there could be more. It’s easy to look in from the outside but there are good reasons things are as they are. I started naively — inspired by the Venezuelan example with a vision of making cutting-edge music theatre in co-productions with European companies.

What is the Venezuelan example?
El Sistema was started by one man, José Antonio Abreu. He was an organist, politician and economist for 37 years. [He was] frustrated by the fact that Venezuela had one symphony orchestra that was peopled almost entirely by Eastern Europeans. He got together four kids in a parking garage, the next day it was eight, the next 11, and today they have 400 000 kids around the country, 130 symphony orchestras, all Venezuelans, and the orchestras are extremely good.

What difference has that made to the society?
Abreu had a very convincing vision of working with kids below the poverty line. They make the music schools in the communities themselves. Studies demonstrate the kids in the music programmes do better at school, go on to better studies, better jobs. Their families function better, contribute more to their communities.

The investment is paying off in Venezuelan society and it is also one of the country’s proudest exports now. The best ambassadors for Venezuela are these young musicians who tour the world. The new conductor of the Los Angeles Philharmonic, Gustavo Dudamel, is a product of El Sistema. The youngest member of the Berlin Philharmonic too — there is a whole crop [of world musicians]. It has been very good for the country’s image, self-esteem. The rest of the world now looks to Venezuela for leadership in music education.

One would have thought South Africa might try something similar, especially with the South-South emphasis these days. Are the social problems we face similar?
[There’s been] a lot of scepticism around the applicability of El Sistema in South Africa. Venezuela has one official language, we have 11, [and] a more diverse culture. But I think the similarities are huge in terms of the structure and the kinds of problems we’re facing, in the way that music can be healing in communities with those kinds of problems.

The world over [we are] facing issues of poverty, alcohol abuse, domestic violence, gang violence, drugs. [The Venezuelans] have really had immense success with music projects in healing those wounds.

When we talk about music what are we talking about? Not drum kits?
El Sistema is built around the orchestra, so it’s Western classical music with orchestral instruments, with the orchestra seen as the ideal social unit. But they do use a lot of Venezuelan music, folk music, popular music, small guitars, traditional flutes and other instruments.

Certainly, when we implement El Sistema in South Africa, we would adapt it to our context. For me it’s fairly clear the basis is the song and the choir, which is far more advanced here than anything was in Venezuela when El Sistema was begun. South Africa has a head start.

But we have previously talked about solemnisation and its limiting effects in South African musical education.
Yes, children here sing, and the leap from singing to reading notation, if you work with young children around the ages of five, six, seven, is a small one. It’s easy. Western notation is just five lines and some symbols, and with that comes a whole lot of abstract skills — you can add, divide, subtract, make fractions, translate an image into a sound.

It advances the user considerably in a broad range. To me it’s obvious, a no-brainer. You have all these amazingly gifted kids and it’s easy to learn to read music. I think it is an empowerment question. Children who are singing have the right to be able to read music.

In South Africa music is taught by rote in the vast majority of communities. There is a thing called tonic sol-fa that was introduced by the Dutch, if I understand correctly, to facilitate the teaching of hymns to choirs. What’s interesting is that it is based on [Zoltán] Kodály’s method of do, re, mi, fa, so, la, ti, which is used in many countries in the world, including Venezuela, but it is used as a step towards music literacy. But only in South Africa does it begin and end with sol-fa. It’s a weird historical thing that I think is very disempowering, because people only have the ability to read this rather limited system of notes and symbols, which is not sufficiently sophisticated to enable the user to read a full score, to understand how harmony works, to transpose and so on.

To clarify, we’re not talking about the private or better government schools, but the less-resourced communities. What are the implications?
I was amazed when I went to the high school choir competition finals in Johannesburg in 2009. I was flabbergasted because here were 10 000 learners from high schools around the country competing and they were just the finalists who had made it through all the rounds and won the coveted prize of a trip to Jo’burg to compete.

They were singing Handel’s arias, the boys sang the Pilgrims’ Chorus from Tannhäuser [Wagner], which is extraordinary. The tenors had an aria from Mozart’s Ascanio in Alba. I thought, with all the moaning, here are 10 000 finalists — that means there must be 100 000 schoolchildren in South Africa who know that Mozart wrote an opera called Ascanio in Alba, which I will wager your average German doesn’t know.

So you have this extraordinary structure that is reaching most of the children but they are not learning to read music. That means out of this you are getting talented young singers who want to make a future in music but have to do bridging courses to get to a basic level of music literacy so they can study at university. So they are doing courses for two years, much harder at 17 and 18 to learn, to get to know what others in privileged schools have had 10 or 12 years to learn. They are hugely disadvantaged and will always be lagging behind. You can’t make a career as a singer if you can’t read music — those days are over — We are not giving our talented youngsters the tools they need to take their rightful place on the international stage.

So what is to be done?
I believe El Sistema holds the key to the future in South Africa because we have seen that it works. It is a democratic tool for social change. I think, with a combination of the extraordinary network of great choirs that already exists, we have the basis to empower young South African ­musicians to go further.