Who is grounding Aristide? 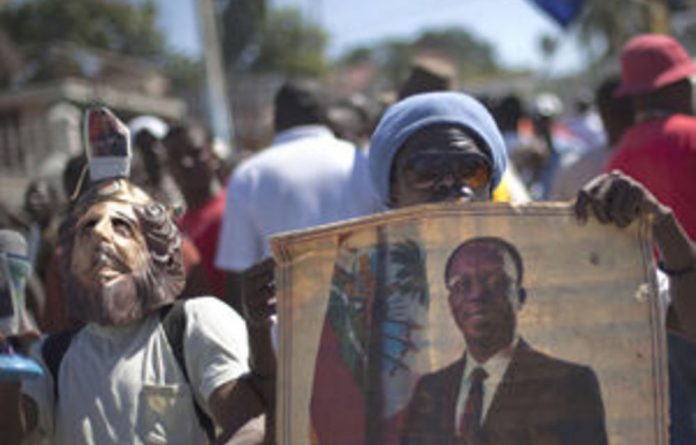 As Haiti prepares for an election run-off on March 20, ousted former president Jean-Bertrand Aristide’s continued presence in South Africa has generated speculation that Pretoria has succumbed to pressure from the United States to keep Aristide from leaving the country before election time.

“Many in Haiti have been greatly inspired by the news of the issuance of president Aristide’s passport, some even travelling miles to the airport to greet his return,” they wrote in the appeal. “Any delay to the Aristides’ prompt travel to Haiti would be yet another disappointment to a people that have already experienced a long list of tragedies, disasters and heartbreak,” runs a portion of the appeal.

A diplomatic passport was handed to Aristide’s lawyer, Ira Kurzban, on February 7. In January Aristide expressed his readiness to return: “Today, tomorrow, at any time.”

The US government, however, has made no secret of its opposition to Aristide’s intended return. During a February 9 press briefing, US assistant secretary of state for public affairs, Philip Crowley, was tackled on the issue of Aristide’s return:

Asked: “Are you discouraging him from returning? Is he a prisoner of South Africa?” Crowley replied: “We would be concerned that if former president Aristide returned to Haiti before the election, it would prove to be an unfortunate distraction. The people of Haiti should be evaluating the two candidates that will participate in the run-off.”

Wikileaks cables
Mark Weisbrot, the co-director of the Centre for Economic and Policy Research in Washington, said that the apparent pressure on Pretoria in regard to Aristide’s return was underscored by a series of Wikileaks cables, one of which suggests that the South African government has been under pressure from Brazil to curtail Aristide’s activities, and several others that indicate that Brazil has in turn been under much pressure from the US about Haiti, particularly in regard to maintaining its role as head of the United Nation’s “stabilisation” mission there.

The South African department of international relations and cooperation has denied any co-option on the Aristide matter, however. “Aristide has asked to go back home; we’ve agreed with him. We are consulting all the role-players to work out the ideal conditions for him to go back. We can’t keep him here against his will,” said International Relations Minister Maite Nkoana-Mashabane.

Sources close to the matter say Aristide’s safety is a consideration. The department would not confirm or deny the belief of a number of civil society organisations that Aristide is being held back until after the March 20 elections at the US’s behest.

Sources close to the Aristide affair indicated that the role of the French in his return was worrying. “Given France’s interest in Haiti’s affairs, there is concern that the French remain unconvinced that Aristide must be allowed to go back,” said a source close to the issue. Kurzban said, however, that Aristide could leave the country only with the cooperation of the South African government and this had not been forthcoming.

“The longer the delay, the less of a possibility there is of president Aristide going back as the issue of his return will be up to whoever is the new president, and one candidate, the Duvalier, Michel Martell [former night club owner Martell defended the regime of former Haitian despot Jean-Claude Duvalier in a press conference], has already qualified his position about Aristide coming back. He doesn’t want it,” he said.

Kurzban said Aristide’s safety would be in greater jeopardy after the March 20 elections than before. “This (concern for Aristide’s safety) is just a ruse cooked up by the US to try to keep Aristide out of the country permanently, as it has attempted to do for the past seven years, because after March 20 there will be a new president and it can then claim new circumstances,” he said.

The US government, with Brazil, which leads the UN peacekeeping force there, has been criticised for massaging Haiti’s electoral process. Aristide’s party, Fanmi Lavalas, was excluded from participation in the November 28 2010 elections by the electoral council. The results of the election were then modified according to the findings of a report made by an Organisation of American States Expert Verification Mission, perceived by many as Washington-controlled.

Elizabeth Trudeau, the press attaché for the US diplomatic mission in South Africa, said: “We are aware that former president Aristide has expressed a desire to return to Haiti. We are not aware of his travel plans. We would refer you to the government of Haiti for questions regarding his travel.”

We write to offer our warm thanks and appreciation for the gracious generosity and historic hospitality that the South African government and the South African people have offered to President Jean-Bertrand Aristide and his family over the past seven years.

South Africa’s action in offering a home to the Aristides following the coup d’état in 2004 was an act of brotherhood in keeping with the many acts of international solidarity shown towards the people of South Africa during their long walk to freedom. This deed will be remembered by the people of Haiti and the world.

Now, at last, the Aristides can return to Haiti, and their exile can end. Finally, all signs now point in that direction. President Aristide has again indicated his desire to return home and assist the people of Haiti. He has said he is ready to go at any time, and his passport has been renewed. All the last remaining obstacles to the Aristides’ return have been removed. Expectations in Haiti have been raised, and many eagerly look forward to his return. The Aristides’ arrival in Haiti will raise the spirits of the Haitian people at the time when they most need it.

We write in the hope that you can assist the Aristides in making their transition as soon as possible. The situation in Haiti remains dire, and the Aristides have expressed their willingness to help Haiti rebuild, through education initiatives and in other desperately needed areas.

Many people in Haiti have been greatly inspired by the news of the issuance of President Aristide’s passport, some even travelling miles to the airport to greet his return, spurred on by rumours of his imminent arrival. Any delays to the Aristides’ prompt travel to Haiti would be yet another disappointment to a people that have already experienced a long list of tragedies, disasters and heartbreak.

As long-time supporters of freedom and justice in both South Africa and Haiti, we again extend our gratitude for the important role that South Africa has played in hosting the Aristides. We also heartily support the efforts of the South African government to assist President Aristide and his family in quickly returning home. And we hope to see President Aristide in Haiti very soon.