Pressure not a problem says Smith as Proteas crash 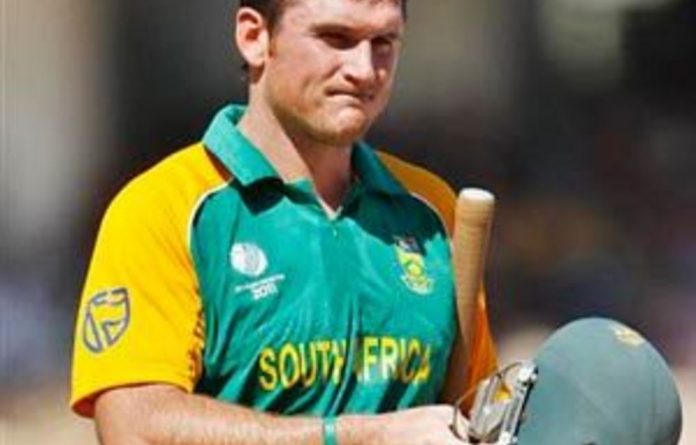 South Africa skipper Graeme Smith hit back at claims his side had ‘choked’ again at the World Cup after a dramatic six-run loss to England on Sunday.

Defeat ended the Proteas’ unbeaten start to the tournament and raised fresh questions about their nerve in tight games.

Needing just 172 to win, they were cruising at 63 without loss.

But they then lost three wickets for 19 runs and three more in the middle of their innings for no runs with the score on 124.

“That’s not predictable at all, is it?” said a sarcastic Smith, when questioned about South Africa’s composure.

“Pressure? We’ve handled ourselves in some tough situations over the last few years, I don’t think pressure is our weakness.”

Smith has always insisted that his team’s fighting credentials were proved beyond doubt in 2008/09 when he led South Africa to their first Test series win in Australia.

South Africa exited the 2003 tournament after failing to understand the Duckworth/Lewis system in a match with Sri Lanka they needed to win, and were thrashed by Australia in a lopsided semi-final four years ago in the Caribbean.

The Proteas, like England, have never won the World Cup and Smith said: “It’s obviously disappointing not to get over the line. We’ve got to learn from today, and pick ourselves up to play India.”

Unusually for a one-day international, the pitch at the Chidambaram Stadium gave the bowlers and plenty of assistance.

“There was a lot on offer for bowlers today, reverse-swing and inconsistent bounce,” Smith said.

“There are a lot of batters’ days in one-day cricket; I suppose this was a bowlers’ day. It wasn’t easy to bat on.

“I thought Faf [du Plessis] and AB [de Villiers] hung in there really well. “If they could have hung in a few more overs it would have been terrific — I think we’d have got home,” added Smith, who said he didn’t wish to be drawn on his dismissal, the first South African wicket to go down.

Smith only exited after a review, requested by England after he was originally given not out caught behind off spinner Graeme Swann.

The South Africa captain paid tribute to Broad (four wickets for 15 runs) and James Anderson for their command of reverse swing.

“I don’t think there are many batters in the world who have really mastered the art of playing reverse swing when it’s going both ways.

“Credit to them for the skill they showed. They were able to create a lot of pressure on the guys.

“I thought 170 was a good total for us to chase. But unfortunately we weren’t good enough today.”

Pietersen will head home to undergo a hernia operation that he had been hoping to postpone until after the competition.

But after looking troubled during Sunday’s six-run win over his native South Africa in Chennai on Sunday, where he made just two off three balls, the 30-year-old will go under the knife immediately.

Pietersen is the 14th player to be replaced at the World Cup as the gruelling international schedule takes its toll on the game’s top stars.

He first complained of the problem after the 6-1 one day international defeat to Australia on the eve of the World Cup which immediately followed the Ashes triumph.

Pietersen, who in common with the majority of his English colleagues has been on the road virtually non-stop for over four months, played in all of England’s opening group games at the World Cup.

He made 39 against the Netherlands, 31 in the game against India, 59 during the embarrassing loss to Ireland before finishing with two in the narrow victory over South Africa. — Sapa-AFP