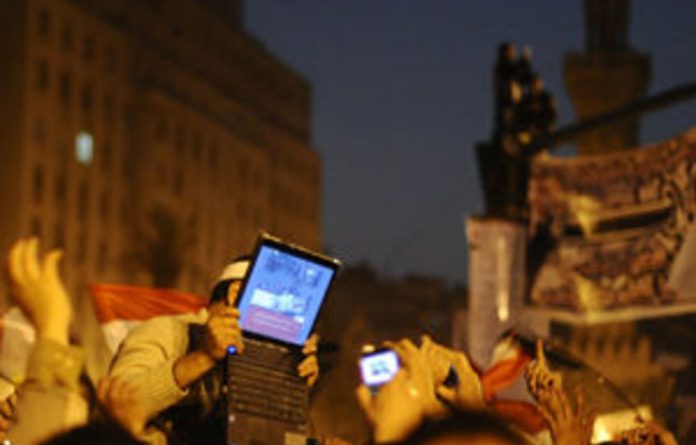 Think of the defining image of the uprisings in the Middle East and North Africa. It has not been the celebrations following the fall of Hosni Mubarak or even the self-immolation of Mohammed Bouazizi in the Tunisian town of Sidi Bouzid.

Instead, the defining image is a young woman or a man with a smartphone. She’s in the Medina in Tunis with a BlackBerry held aloft, photographing a demonstration outside the prime minister’s house. He’s an angry Egyptian doctor in an aid station, capturing the image of a man with a head injury from the missiles thrown by Mubarak’s supporters. Or it’s a Libyan in Benghazi running with his phone switched to a jerky video mode, surprised when the youth in front of him is shot through the head.

These are images that have found their way onto the internet through social media sites. And it’s not just images. In Tahrir Square I sat one morning next to a 60-year-old surgeon cheerfully tweeting his involvement in the protest. The barricades today do not bristle with bayonets and rifles, but with phones.

Commentators have tried to cast the uprisings as many things: as an Arab version of the Eastern European revolutions of 1989 or something akin to the Iranian revolution that toppled the shah in 1979. Most often, though, they have tried to conceive them through the media that informed them, as the result of WikiLeaks, as “Twitter revolutions”, or inspired by Facebook.

This, as American media commentator Jay Rosen has written, has generated an equally controversial kind of reply determined to deny social media an important role. Proponents of this view include Malcolm Gladwell in the New Yorker (“Does Egypt Need Twitter?”) and the New Statesman‘s Laurie Penny (“Revolts Don’t Have to be Tweeted”). They point out that there were revolutions before social media and that it is people who make revolutions.

Except that the social media have played a role. For journalists covering the events this is an unavoidable reality. The instantaneous nature of the social media’s communication — self-broadcast ideas unlimited by publication deadlines and broadcast news slots — explains, in part, the speed at which these revolutions have unravelled and their almost viral spread across a region. It explains, too, the often loose and non-hierarchical organisation of the protest movements unconsciously modelled on the networks of the web.

Impact of social media
Speaking to the Huffington Post Rosen argued that those taking positions at either extreme of the debate were being lazy and inaccurate. He is right. The importance and impact of social media on each of the rebellions have been defined by specific local factors, not least how people live their lives online in individual countries and what state limits are in place.

When Tarak Mekki, an exiled Tunisian businessman, politician and internet activist returned to Tunisia from Canada after the Jasmine Revolution he was greeted by a crowd of hundreds. Most of them know Mekki for One Thousand and One Nights, the Monday-night video he posted on YouTube, ridiculing the regime of President Zine al-Abidine Ben Ali.

“It’s amazing that we participated via the internet in ousting him,” he said on arrival. “Via uploading videos. What we did on the internet had credibility and that’s why it was successful.”

Ben Ali’s Tunisia was vulnerable to the kind of external and internal dissent represented by One Thousand and One Nights. In a state where the media were tightly controlled and opposition was ruthlessly discouraged Tunisia not only exercised a tight monopoly on internet provision, but blocked access to most social networking sites — except Facebook.

“They wanted to close Facebook down in the first quarter of 2009,” says Khaled Koubaa, the president of the Internet Society in Tunisia, “but it was very difficult. So many people were using it that it appears that the regime backed off because they thought banning it might actually cause more problems.”

When the Tunisian government did shut it down briefly, for 16 days in August 2008, it backed down in the face of a threat by cyber activists to close its internet accounts. Instead, said Koubaa, the Tunisian authorities attempted to harass those posting on Facebook. “If they became aware of you on Facebook they would try to divert your account to a fake login page to steal your password.”

And in spite of the claims of Tunisia being a Twitter revolution or inspired by WikiLeaks neither played much of a part. In pre-revolutionary Tunisia only about 200 active tweeters existed out of about 2 000 with registered accounts. The WikiLeaks pages on Tunisian corruption, said Koubaa, who, with his friends, attempted to set up sites where his countrymen could view them, were blocked as soon as they appeared and, anyway, the information was hardly news to Tunisians.

But Facebook was huge. Koubaa said that a few thousand “geeks” like him communicated via Twitter, while perhaps two million talked on Facebook. The activism of the first group informed that of the latter.

‘Amar 404’
This left a peculiar loophole that persisted until December, when the regime finally launched a full-scale attack on Facebook. The country had already tortured and imprisoned bloggers, and internet censors at the ministry of the interior were nicknamed “Amar 404” after the 404 error message that appeared when a page was blocked.

“Social media were crucial,” said Koubaa. “Three months before Mohammed Bouazizi burned himself we had a similar case in Monastir. But no one knew about it because it was not filmed. The images of Bouazizi were put on Facebook and everybody saw it.”

And with state censorship rife in many of these countries Facebook has functioned in the way the media should, as a source of information. A week after Ben Ali’s fall, Nouridine Bhourri, a 24-year-old call-centre worker, said protesters still did not believe the news media, given that many old-order journalists were still working in it.

“I research what’s happening on Facebook and the internet,” Bhourri said. Like many she has become a foot soldier in the internet campaign against the old Tunisian regime. “I put up amateur video on Facebook. For instance, a friend got some footage of a sniper on Avenue de Carthage. It’s what I’ve been doing, even during the crisis. You share video and pictures.”

If Twitter had a negligible influence on events in Tunisia, Egypt was different. A far more mature and extensive social media environment was crucial in organising the uprising against Mubarak, whose government responded by ordering mobile service providers to send text messages rallying his supporters, a trick replicated in the past week by Libya’s Muammar Gaddafi.

In Egypt, details of demonstrations were circulated by both Facebook and Twitter and the activists’ 12-page guide to confronting the regime was distributed by email.

Then the Mubarak regime pulled the plug on the country’s internet services and 3G network. What replaced social media was — oddly enough — the analogue equivalent of Twitter: handheld signs at demonstrations saying where and when people should gather the next day.

Sultan Al Qassemi, a columnist based in the United Arab ­Emirates, who has tweeted non-stop on the uprisings, passing on information and English translations of key speeches, believes that some claims about the impact of social media need to be taken with a pinch of salt.

“Social media have certainly played a part but their impact is often exaggerated. Egypt was disconnected from the outside world for days, yet the movement never stopped.

“Libya faces even more severe internet disruption, yet we continue to see the movement picking up pace. Where social media had a major impact was in conveying the news to the outside world. Bloggers and Twitter users were able to transmit news bites that would otherwise never make it to mainstream news media. This information has garnered the attention of the citizens of the world who expressed solidarity with us and even put pressure on their own governments to react.

“Other uses for social media were to transmit information on medical requirements, essential telephone numbers and the satellite frequencies of Al Jazeera, which is continuously disrupted.”

Indeed, this is what has been most obvious about the social media’s impact in Bahrain and Libya. Social networking sites have supplied the most graphic images of the crackdowns on protesters, but also broadcast messages from hospitals looking for blood, rallied demonstrators and provided international dial-up numbers for those whose internet has been blocked. Libyan activists also asked Egyptians to send their Sim cards across the border so they could communicate without being bugged.

But above all, it has been about the ability to communicate. Egyptian-born blogger Mona Eltahawy said that the social media had given the most marginalised groups in the region a voice — to say “enough” and “this is how I feel”. — Guardian News & Media 2011

In an increasingly digital world, OnlyFans has given online creators a new way to make money on their own terms
Read more
National