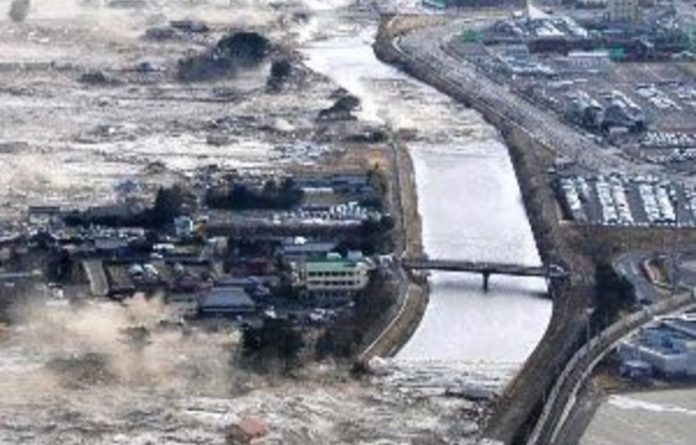 A devastating tsunami triggered by the biggest earthquake on record in Japan looked set to kill at least 1 000 people along the northeastern coast on Friday after a wall of water swept away everything in its path.

Thousands of residents were evacuated from an area around a nuclear plant after radiation levels rose in the reactor, but there was no word on whether there had actually been a leak.

Underscoring grave concerns about the Fukushima plant some 240km north of Tokyo, United States (US) Secretary of State Hillary Clinton said the US air force had delivered coolant to avert a rise in the temperature of the facility’s nuclear rods.

The unfolding disaster in the wake of the 8,9-magnitude earthquake and 10m high tsunami prompted offers of help from dozens of countries.

China said rescuers were ready to help with quake relief while US President Barack Obama told Japanese Prime Minister Naoto Kan the United States would assist in any way.

Stunning TV footage showed a muddy torrent of water carrying cars and wrecked homes at high speed across farmland near the coastal city of Sendai, home to one million people and which lies 300km northeast of Tokyo. Ships had been flung onto a harbour wharf, where they lay helplessly on their side.

Boats, cars and trucks were tossed around like toys in the water after a small tsunami hit the town of Kamaichi in northern Japan. An overpass, location unknown, appeared to have collapsed and cars were turning around and speeding away.

Japanese politicians pushed for an emergency budget to fund relief efforts after Kan asked them to “save the country”, Kyodo news agency reported. Japan is already the most heavily indebted major economy in the world, meaning any funding efforts would be closely scrutinised by financial markets.

‘Nowhere else to go’
Domestic media said the death toll was expected to exceed 1 000, most of whom appeared to have drowned. The extent of the destruction along a lengthy stretch of coastline suggested the death toll could rise significantly. Tsunami warnings were issued across the Pacific but were later lifted for some of the most populated countries in the region, including Australia, Taiwan and New Zealand.

Even in a nation accustomed to earthquakes, the devastation was shocking.

“A big area of Sendai city near the coast, is flooded. We are hearing that people who were evacuated are stranded,” said

Rie Sugimoto, a reporter for NHK television in Sendai.

“About 140 people, including children, were rushed to an elementary school and are on the rooftop but they are surrounded by water and have nowhere else to go.”

Japan has prided itself on its speedy tsunami warning system, which has been upgraded several times since its inception in 1952, including after a 7,8-magnitude quake triggered a 30m high wave before a warning was given.

The country has also built countless breakwaters and floodgates to protect ports and coastal areas, although experts said they might not have been enough to prevent disasters such as what happened on Friday.

Chief Cabinet Secretary Yukio Edano told people to stay in safe places as the cold deepened into the night. “Please help each other and act calmly,” he told a news conference.

In Tokyo, residents who had earlier fled swaying buildings jammed the streets trying to make their way home after much of the city’s public transportation was halted.

Many subways in Tokyo later resumed operation but trains did not run. People who decided not to walk home slept in office buildings.

“I was unable stay on my feet because of the violent shaking. The aftershocks gave us no reprieve. Then the tsunamis came when we tried to run for cover. It was the strongest quake I experienced,” a woman with a baby on her back told television in northern Japan.

Fires across the coast
The quake, the most powerful since Japan started keeping records 140 years ago, sparked at least 80 fires in cities and towns along the coast, Kyodo said.

Other Japanese nuclear power plants and oil refineries were shut down and one refinery was ablaze. Television footage showed an intense fire in the waterfront area near Sendai.

Auto plants, electronics factories and refineries shut, roads buckled and power to millions of homes and businesses was knocked out. Several airports, including Tokyo’s Narita, were closed and rail services halted. All ports were shut.

The central bank said it would cut short a two-day policy review scheduled for next week to one day on Monday and promised to do its utmost to ensure financial market stability.

The disaster occurred as the world’s third-largest economy had been showing signs of reviving from an economic contraction in the final quarter of last year. The disaster raised the prospect of major disruptions for many key businesses and a massive repair bill running into tens of billions of dollars.

‘The worst I’ve felt’
The tsunami alerts revived memories of the giant waves which struck Asia in 2004. Warnings were issued for countries to the west of Japan and across the Pacific as far away as Colombia and Peru, but the tsunami dissipated as it sped across the ocean and worst fears in the Americas were not realised.

The earthquake was the fifth most powerful to hit the world in the past century.

“The building shook for what seemed a long time and many people in the newsroom grabbed their helmets and some got under their desks,” Reuters correspondent Linda Sieg said in Tokyo.

“It was probably the worst I have felt since I came to Japan more than 20 years ago.”

The quake surpasses the Great Kanto quake of September 1 1923, which had a magnitude of 7,9 and killed more than 140 000 people in the Tokyo area.

The 1995 Kobe quake caused $100-billion in damage and was the most expensive natural disaster in history. Economic damage from the 2004 Indian Ocean tsunami was estimated at about $10-billion.

Earthquakes are common in Japan, one of the world’s most seismically active areas.

Banri Kaieda said that authorities were nearing a decision to release radioactive steam from a troubled nuclear reactor in a bid to ease a pressure build-up.

A spokesperson for Tokyo Electric Power, which runs the Fukushima number one plant, told Agence France-Presse: “Pressure has risen in the container of the reactor and we are trying to deal with it.”

The Japanese government on Friday told thousands of residents living within a 3km radius of the plant to evacuate after its cooling system failed following a huge 8,9-magnitude quake, the biggest in Japan’s history. — Reuters, AFP