Mthombo: A white elephant in the making 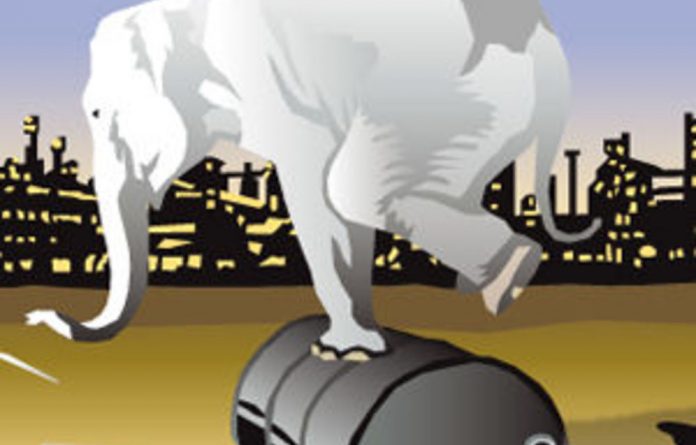 As the oil price has again breached the psychological three-figure mark of $100 a barrel, the security of oil supply is rising on the agenda.

South Africa’s national oil company, PetroSA, is pushing hard for Cabinet to approve its ‘Project Mthombo”, a new oil refinery to be built at Coega in the Eastern Cape.

But it is now widely acknowledged that the world has reached ‘peak oil”, the time when global oil supplies can no longer rise to match demand. In a future of declining oil supplies and rising prices, Project Mthombo would become the country’s biggest white elephant — one that it can ill afford.

The idea for Mthombo arose from the department of energy’s 2007 Energy Security Master Plan, which recommended that a greater proportion of South Africa’s liquid fuels be produced domestically.

Feasibility investigations were concluded in September 2009 and last February the PetroSA board approved the progression of the project to front-end engineering studies, conditional on ministerial approval.

PetroSA hopes Mthombo will come on stream by 2014. With a capacity of 360 000 barrels a day, Mthombo would be the biggest refinery in Africa.

According to the department of energy’s spokesperson, Bheki Khumalo, the projected cost of the mega-project was R110-billion in September 2010.

Boosting supply security
PetroSA’s main motivation for Mthombo is to boost security of supply in the face of continued growth in liquid fuel demand. It is also envisaged to supply other Southern African countries as their economies expand. Another reason is to produce better-quality fuels, leading to cleaner air and the improved health of citizens. It is also hoped Mthombo will stimulate the Eastern Cape economy.

However, several objections have been put forward against Mthombo.

Oil companies such as BP have argued that there is sufficient refining capacity in South Africa already and a new refinery would be redundant.

Others have raised the logistical problems associated with the Coega site: to transport the fuels to markets in Gauteng and other metros will require constructing new pipelines or shipping the refined fuels to Durban to the new multiproduct pipeline.

More importantly, a new refinery will not help wean South Africa off imported oil — it will merely process additional crude imports to replace the small fraction of total liquid fuel consumption that is currently imported in refined form.

But the biggest problem with Mthombo is the future of global crude oil supplies.

The future of global crude oil supplies
In its 2010 World Energy Outlook the International Energy Agency confirmed that conventional oil production reached a peak in 2006 and is set to decline by around 4% a year from now on. Total liquid fuels production has increased, thanks to expanding deepwater and unconventional oil. But these sources have marginal production costs of $80 per barrel or more and are thus helping to push up the oil price on international markets.

An emerging consensus is the warning that global supplies of oil from all sources will begin to contract within the next few years.

The amount of oil available on world export markets will decline even more rapidly as consumption in oil-producing nations continues to grow. The result is that oil prices will rocket upwards, curbing demand to bring it into line with diminishing supply. The oil-shock experiences of 1973, 1979 and 2008 clearly showed how price spikes bring about global economic recessions.

The power of demand destruction was demonstrated forcefully in South Africa in the 2009 recession when the demand for all petroleum products fell by an average of 2,4%, and diesel consumption plummeted by 6,6%. The prognosis for the future is thus of a growing glut of global oil-refining capacity as crude oil supplies dwindle.

Multinational oil companies such as BP and Shell have seen the writing on the wall, which explains why they have been selling downstream assets in sub-Saharan Africa.

In the context of global oil decline the only way a new refinery will make sense will be if South Africa is guaranteed a source of oil imports at competitive prices.

High prices could destroy demand
But neither Chávez nor any other oil producer will be willing or able to give oil away at discount prices. So demand will be destroyed by high prices whether a strategic alliance is formed or not.

In addition, when it comes to construction costs, Mthombo will suffer the same fate as Eskom’s two new coal-fired power stations. Cost escalation will be driven both by climbing energy prices and rising interest rates (in response to inflation).

The sensible way to avert a seriously damaging liquid fuels supply crisis is to invest in alternative transport systems that are more energy efficient and not reliant on liquid petroleum fuels.

In their seminal book, Transport Revolutions, Richard Gilbert and Anthony Perl argue convincingly that grid-connected vehicles (GCVs) are the best strategy for mitigating the impact of peak oil on transport and the economy. GCVs include electrified railways — heavy and light — as well as trams and more futuristic modular electric cars that can hook into the grid.

GCVs will need extra electrical power, which should be generated from renewable energy sources such as solar, wind and ocean power.

Hopefully the South African government will see the light and pick sensible flagship mega-projects — such as the mooted solar park near Upington or a high-speed rail link between Durban and Gauteng — not more white elephants like football stadiums and new airports.

The promise of a sustainable future for our society depends on the choices made now. Citizens need to be aware of reality and hold their elected representatives to account.

Jeremy Wakeford is an independent consultant specialising in energy, economics and sustainability. He is chairman of the Association for the Study of Peak Oil South Africa and research director of the South African New Economics Network