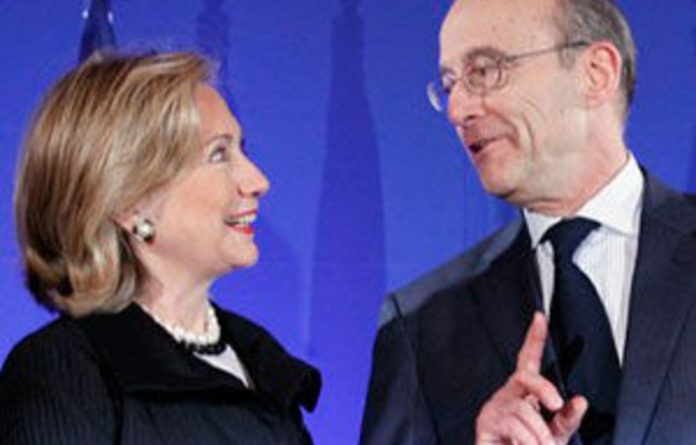 Group of Eight (G8) powers shied away from imposing a no-fly zone to protect Libyans from assault by ruler Muammar Gaddafi’s forces, laying it off to the United Nations Security Council on Tuesday.

France and Britain had been pushing for the plan that would ground Libyan warplanes and France had even talked of targeted air strikes against Gaddafi’s strategic sites.

“For the moment I have not convinced them,” French Foreign Minister Alain Juppe said on Europe 1 radio, referring to efforts to rally his fellow G8 foreign ministers at a dinner on Monday night.

They agreed instead “to immediately re-launch a discussion at the UN Security Council, and that is under way today, to take up a resolution and raise the pressure against the Gaddafi regime”.

Juppe recognised that Gaddafi was outgunning Libya’s rebels, whom the leader of four decades has driven out of several towns with shelling and airstrikes.

“Gaddafi is scoring points,” Juppe said. “We have perhaps missed a chance to re-establish the balance,” he added, judging that there was nothing to stop Gaddafi seizing the eastern rebel stronghold of Benghazi.

“Currently we do not have the military means because the international community has not decided to provide them,” Juppe said. He cited a sea embargo among possible alternative means of applying pressure.

A senior US official told reporters there was a “sense of urgency” at Monday’s dinner about the humanitarian and political situation in Libya.

They agreed to turn to the Security Council “for a full and public discussion of what all of the measures that have been discussed entail,” said a US official, who asked not to be named.

Some ministers talked of no-fly zones, others “safety zones”, and others talked of further sanctions, he added. They agreed on the need to “increase pressure” on Gaddafi and “stop the regime from using force” against Libyans.

In a no-fly zone, US and Nato warplanes would ground Gaddafi’s air power to protect civilians and the opposition — but would likely need hundreds of planes to police the skies over Libya’s vast territory.

The plan was backed by the 22-nation Arab League, considered crucial for dealing with the region.

Seeking formal support
Britain and France, which are drafting a resolution for the Security Council, failed to convince their European Union partners and permanent Security Council members Russia and the US.

China, the only veto-wielding member of the Security Council not represented at the Paris G8 talks, also opposes a no-fly zone.

The Libyan opposition national council’s representative, Mahmoud Jibril, and his delegation have been seeking formal support abroad and a no-fly zone.

Clinton met Jibril in a 45-minute “private and candid” conversation about ways Washington could support the opposition against Gaddafi, her top aide Philippe Reines told reporters.

But she stopped short of pledging US support for military aid, US officials said.

France has taken the lead in formally recognising the council as Libya’s legitimate representatives.

Both the US and the EU have agreed to talk to them without formally recognising them, seeking to get a better understanding of the organisation, its make-up and its political goals.

Further G8 talks were due on Tuesday. — AFP