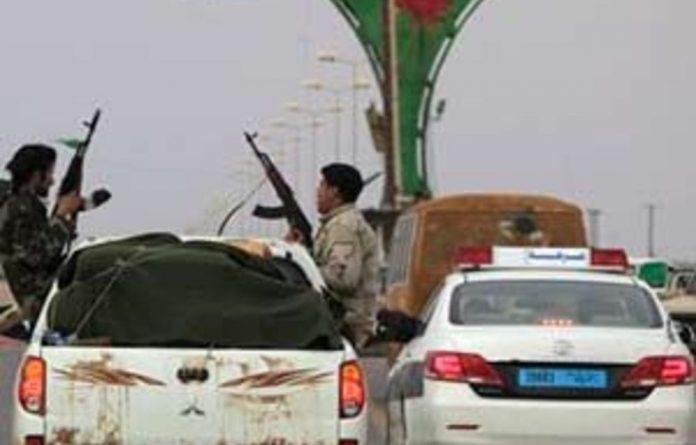 A trickle of Libyan refugees has become a flood after Muammar Gaddafi’s troops entered the rebel bastion of Ajdabiyah, a key city in the shrinking territory controlled by anti-government forces.

At Libya’s eastern border crossing with Egypt at Salum, the number of Libyan nationals joining the thousands of mainly Egyptian and African migrant workers fleeing the country has shot up in the last two days as Gaddafi’s army pushed east.

On Tuesday, Gaddafi’s forces swept into Ajdabiyah, 150km south of Benghazi on the highway to the capital Tripoli.

Families shoved their possessions, and many their children, into the back of pickup trucks and fled mortars and missiles raining down around them.

In Salum, grim-faced fathers scrambled to find drivers to take them further into Egypt, while mothers and children stood among piles of their belongings on the roadside.

“We’re going to Egypt on holiday,” said Benghazi resident Fathi Ramadan next to his pickup truck, which was clearly packed with almost everything his family of five owned.

On further questioning he gave another motive.

“There’s a lot of tension. The fighting is getting closer, and the tension will explode into more violence,” he said.

“That’s not the case. They’re allowed through,” he said, adding that the number of Libyan refugees had jumped since mass protests wrested control of much of east Libya from Gaddafi’s oppressive rule in mid-February.

“In the beginning it was mostly migrant workers and only a scattered few Libyans. Now it’s a great number,” he said.

About a week ago some 5 000 people of all nationalities were passing through Salum a day, about half of whom were Egyptian and the rest from other countries, including Chad, Sudan and Bangladesh, Hisan said.

The number of refugees then dipped, but jumped again in the last two days, and now at least a third a were Libyan, he said.

Fleeing, terrified
Late on Wednesday refugees from Ajdabiyah gave accounts of heavy fighting and air strikes by government jets. One man said his neighbour had been executed by Gaddafi forces.

On Thursday, many of the Libyans crossing the border were from Libya’s second city of Benghazi. They gave accounts of air strikes on the city’s airport.

“We left because we’re terrified. Why else would anyone leave their home and leave everything behind?” said Um Mohammed, who like many others feared Gaddafi’s forces would take Benghazi.

“If they do, they’ll kill and imprison people and shut the border,” she added, as she pushed and shoved with other Libyans at a money changer’s desk.

The money changer sat counting huge wads of Libyan currency, which he said was rapidly declining in value.

Panic is growing among Libyans, and reports have grown of alleged Gaddafi-supporters being hunted down in the rebel-held east for passing on information. Journalists too have had rough treatment in the past week from some rebels, who accuse reporters of giving away their secrets.

Despite fleeing their country, Libyans in Egypt insisted rebels had control of the east and would be victorious.

They have in fact been pushed back from Bin Jawad, Ras Lanuf and Brega in the last two weeks, their mostly light weapons little match for Gaddafi’s jets, tanks and army.

Sources in Ajdabiyah said rebels and Gaddafi’s forces were still fighting. The rebel grip on Libya’s east appeared increasingly tenuous, and in Salum, migration aid workers were expanding their clinic and preparing for more refugees.

Not all are as lucky as the Libyans. Hisan said scores of Iraqis and Palestinians were trapped at the border because Egyptian migration officials would not let them through.

Also at the crossing were hundreds of African migrant workers, sleeping in the open with their few possessions, surrounded by rubbish and filth as they waited for their embassies to repatriate them. — Reuters