‘Avoid disaster on our shores’ 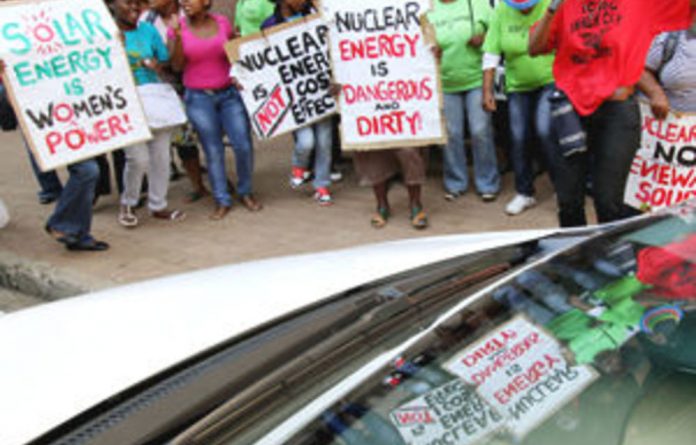 Environmentalists are urging government to drop nuclear energy from its climate-change strategy following the earthquake and threatened meltdown of Japanese reactors.

In a bid to cut down on coal-fired power the government proposes to build six new nuclear plants along the Cape coastline. Work on the first facility, at Thyspunt near Jeffreys Bay, could start next year.

“This crisis, considered the second-worst nuclear accident in history, has proved that nuclear power generation is not safe,” said Earthlife Africa’s Tristen Taylor. “We are calling on the government and Eskom to avoid such a catastrophe on our shores.”

On Tuesday Germany announced it would shut down its seven nuclear plants for at least three months and Europe’s energy chiefs decided at an emergency meeting in Brussels to rethink a recent nuclear revival prompted by the rush for low-carbon energy.

In contrast, South Africa’s energy minister, Dipuo Peters, told delegates at an electricity conference in Cape Town that the Japanese crisis had not affected government plans to expand the nuclear energy supply from 6,5% to 14% of the country’s energy mix by 2030.

Peters said all types of power generation had potential risks attached to them, although the Japanese crisis could have an influence on planning for future nuclear plants. “I believe that as a country we need to be able to be alive to what is happening in that part of the world,” she said.

Peters heads the interministerial committee overseeing the roll-out of a green paper on national climate change response, which proposes scaling nuclear energy up to 10 000MW by 2035 “to ensure energy security as well as meet climate change mitigation undertakings”.

Nuclear policy ‘based on apartheid strategy’
Mike Kantey, the chairperson of the Coalition against Nuclear Energy, told the Mail & Guardian that nuclear energy was not an appropriate mitigation option because it was too expensive, took too long to get up and running and depended on fossil fuels for the mining, processing and enrichment of uranium.

The government has five sites in mind for new nuclear plants: Schulpfontein and Brazil in the northern Cape, Bantamsklip near Gansbaai, Thyspunt and a second reactor at Koeberg. “These five sites were chosen by [former president] PW Botha in the 1980s,” Kantey said. “The policy that is emerging now is based on an old apartheid strategy.”

The controversial nature of the nuclear plan is highlighted by the public input workshops for the climate change green paper staged by the environment department in recent months. A white paper is expected to be finalised before the Conference of Parties (COP17) global climate change negotiations in Durban at the end of the year.

National Union of Mineworkers representative Mziwakhe Nhlope said at the Gauteng workshop in February that the union shared Cosatu’s anti-nuclear position. “Including nuclear energy raises issues of safety, cost, sustainability and the impact on jobs,” he said.

Gray Maguire, an Earthlife Africa representative, asked at the Western Cape workshop how the climat change strategy dealt with expected rising sea levels and flooding in the future, particularly around nuclear plants.

The panel, which included Peter Lukey, the acting director general in charge of climate change in the environment department, replied: “It is assumed that sea-level rises are taken into consideration in the planning of new plants. Predicted sea-level rises can be accommodated by the design life of nuclear plants.”

Lukey and energy department spokesperson Ndivhuwo Khangale had not responded to the M&G‘s questions at the time of going to print.

“Solar and wind power have between half and one-seventh fewer emissions than nuclear energy,” he said. “From a job-creation viewpoint, for existing and scalable skills in our economy, they also far outweigh nuclear power.”

Added to this were radiation from nuclear waste and the uninsurable risks of nuclear energy, he said. “It’s clear that the South African government should remove nuclear power from the climate-change-response green paper.”

The nuclear ambitions set out in the green paper are in line with the government’s integrated resource plan for electricity generation in the next 20 years, which is expected to be finalised by the end of April.

Eskom, which would be in charge of the nuclear roll-out, downplayed fears about safety this week. “We will be looking at what happened in Japan, but South Africa has a nuclear safety culture because of the Koeberg station,” said Tony Stott, the utility’s nuclear spokesperson. “How many people are killed on the roads every day compared with people killed in the nuclear industry?”

The proposed new stations would use modern technology and the causes of the Japanese crisis would be taken into account, Stott said.

The Congress of the People said in a parliamentary statement on Wednesday that 91 workers at Koeberg were exposed to radiation last year.

“What if that accident had been bigger and a 50km evacuation zone had to be declared? Where would Cape Town’s population evacuate to?” the party asked. “What is happening in Japan will unnerve South Africans living close to Koeberg and the other areas where Eskom is planning to build nuclear plants.”