Call for Gaddafi to be assassinated 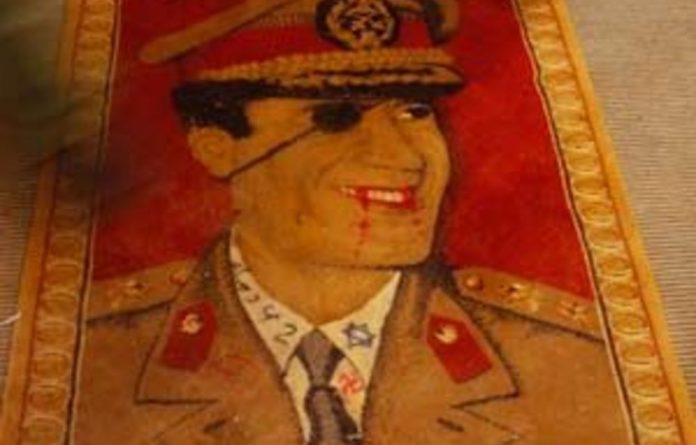 Libya’s revolutionary leadership is pressing Western powers to assassinate Muammar Gaddafi and launch military strikes against his forces to protect rebel-held cities from the threat of bloody assault.

Mustafa Gheriani, spokesperson for the revolutionary national council in its stronghold of Benghazi, said the appeal was to be made by a delegation meeting the French president, Nicolas Sarkozy, and the United States secretary of state, Hillary Clinton, in Paris on Monday this week, as G8 foreign ministers gathered there to consider whether to back French and British calls for a no-fly zone over Libya.

‘We are telling the West we want a no-fly zone, we want tactical strikes against those tanks and rockets that are being used against us and we want a strike against Gaddafi’s compound,” said Gheriani. ‘This is the message from our delegation in Europe.”

Asked if that meant that the revolutionary council wanted the West to assassinate Gaddafi, Gheriani replied: ‘Why not? If he dies, nobody will shed a tear.”

But with diplomatic wrangling focused on the issue of the no-fly zone, there appeared to be little immediate prospect of a foreign military assault on Gaddafi’s forces, let alone an air strike against the Libyan dictator.

The Libyan revolutionary leadership made the appeal as Gaddafi’s airforce bombed Ajdarbia, a town of 135 000 people that is the last major obstacle for his forces before Benghazi, the seat of the revolutionary council.

Those attacks strengthened the hand of France and Britain in pressing for intervention. Paris said it wanted to see a no-fly zone ‘as fast as possible”. The move is backed by the Arab League, which may ease the way to agreement at the United Nations Security Council. France and Britain were also expected to push the move at a Nato meeting on Wednesday.

But the rebels’ appeal is also a recognition that while a no-fly zone would provide a boost to them, their military defeats of recent days have largely been under an onslaught of rockets and shells — and air strikes have been relatively peripheral.

A no-fly zone alone may not be enough to prevent the continued advance of Gaddafi’s forces towards Benghazi, the revolutionaries’ de
facto capital.

No-fly zone
So far no Western nation has explicitly supported attacks on Gaddafi’s forces separate from enforcing a no-fly zone. The issue is complicated by overwhelming opposition — even among the insurgents — to foreign forces becoming involved on the ground, in large part because of strong views about the consequences of the invasion of Iraq.

The talks are being closely watched in Benghazi and other areas under the control of the revolutionaries where Libyans are increasingly concerned at the direction of the conflict and the West’s failure, so far at least, to follow through on calls for Gaddafi to go with action in support of the rebellion.

A large French flag hangs on the front of the courthouse used as the revolutionary council’s headquarters after Paris recognised the rebel leadership and the tricolour is often seen on the streets of Benghazi. But Libyans are also increasingly vocal in their criticism of Washington, in particular, for what is seen as a failure to back up rhetoric against the regime.

However, Gheriani said that if the West failed to offer practical help to the revolutionaries to free themselves from Gaddafi’s rule, it risked frustrated Libyans turning to religious extremists.

‘The West is missing the point. The revolution was started because people were feeling despair from poverty, from oppression. Their last hope was freedom. If the West takes too long — where people say it’s too little, too late — then people become a target for extremists who say the West doesn’t care about them,” he said.

‘Most people in this country are moderates and extremists have not been able to penetrate them. But if they get to the point of disillusionment with the West, there will be no going back.”

Although the revolutionary leadership is reluctant to concede that it is enduring significant military setbacks, Gaddafi’s forces have driven them from two small towns and back about 240km to the edge of Ajdarbia. Last Sunday the rebel army fled in the face of a barrage of rockets and shells as Tripoli’s army took Brega, a day after seizing the strategic oil centre of Ras Lanuf, about 150km away.

The rebels’ military leader, Abdel Fattah Younis, Gaddafi’s former interior minister, has promised a vigorous defence of Ajdarbia to block the government’s advance on Benghazi, 140km along the coastal road.

Younis has said he believes Gaddafi’s supply lines are overstretched and his forces demoralised. He also said that street fighting in a town would be a more even contest than facing rocket barrages in largely open desert. But the defences on display on Monday, which included a handful of tanks and armoured vehicles and small artillery guns, did not look strong.

The revolutionaries claimed to be back in Brega, but provided no evidence and prevented reporters from travelling towards the town.
On Monday Gaddafi’s forces also attacked Zuwara, a town of 40 000 people about 100km west of Tripoli and near the Tunisian border. Residents described shelling and said armoured vehicles were in the heart of the town.

‘I can see the tanks from where I am now and they are about 500m from the centre of Zuwara,” Tarek Abdullah told Reuters by telephone. ‘I think soon the whole town will fall into their hands.”

But the pressure appeared to be off the only major city in the west still held by the rebels, Misrata, 200km east of the capital. Tripoli’s assault was apparently stalled amid claims of a mutiny within the ranks of the besieging government forces. —