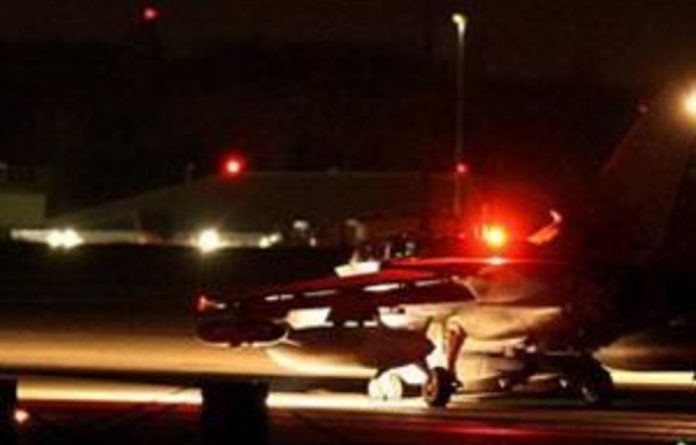 Rebels who had been driven back to their stronghold of Benghazi by the Libyan leader’s air, sea and land offensive in the past two weeks were returning in 4×4 pick-ups to the town of Ajdabiyah, the hard fought over gateway to the east.

The road the rebels drove was a scene of devastation. This correspondent counted at least 14 corpses, though the scale of the bombardment made identifying bodies difficult.

“This is all France … Today we came through and saw the road open,” said rebel fighter Tahir Sassi, surveying one area where blackened vehicles lined the road and lamp posts were cut in two or bent over.

Other rebels claimed some of the credit from earlier fighting, though they had failed to the hold ground against the Gaddafi’s far superior firepower.

About 14 tanks, 20 armoured personnel carriers, two trucks with multiple rocket launchers and dozens of pick-ups — all destroyed — were visible, indicating the strength of the force sent to retake Benghazi from rebels.

One tank was a blackened wreck with its turret blown off. Another tank, a tank transporter and armoured personnel carriers smouldered. A few hundred metres ahead, munitions were still exploding as flames licked around vehicles and stores.

Rebels had pleaded for military intervention as they were were pushed back and as Gaddafi vowed “no mercy, no pity” as he advanced towards Benghazi where the interim rebel National Libyan Council has its headquarters.

France led the calls for intervention and its planes were the first into Libyan airspace to launch raids, before US and British warships and submarines fired 110 Tomahawk missiles overnight against air defences.

‘No more retreat’
“Gaddafi is like a chicken and the coalition is plucking his feathers so he can’t fly. The revolutionaries will slit his neck,” said Fathi Bin Saud, a 52-year-old rebel carrying a rocket propelled grenade launcher surveying the wreckage.

“There is no more retreat, we are going forward from now on,” he said. “Not all of this is the coalition. We did some of it as well. They encourage us. We were fighting even before they came. This has raised our morale.”

Rebels were heavily outgunned by Gaddafi before the West acted. This month, they reached the town of Bin Jawad about 525km east of Tripoli before being driven back to Ajdabiyah, more than 700km from the capital.

As they retreated, they lost a series of key coastal oil towns such as Es Sider, Ras Lanuf and Brega.

The rebels, who have mainly relied on 4×4 pick-ups mounted with machine guns, could not withstand the bombardments from warplanes, artillery and tanks.

Some of the bodies on the road were charred, others were already covered with blankets. Some were alongside vehicles and one lay inside a destroyed ambulance, with no sign of those who would have attended him.

Flesh and blood was smeared on the ground at one spot, where there were bandages scattered on the floor.

Gaddafi’s forces about 20km south of Benghazi appeared to have been taken by surprise by one air strike on their camp.

Enough bedding and clothes for hundreds of men littered the area for 200m on either side of the road, along with boots, body armour, cigarettes and cassette tapes.

Meat could still be seen on barbeque skewers, and the skins of freshly butchered goats lay on the ground.

“Tell the West to destroy Gaddafi slowly, piece by piece by piece, the way he did to us for 40 years,” Jamal al-Majbouri, who owns a farm nearby said. – Reuters