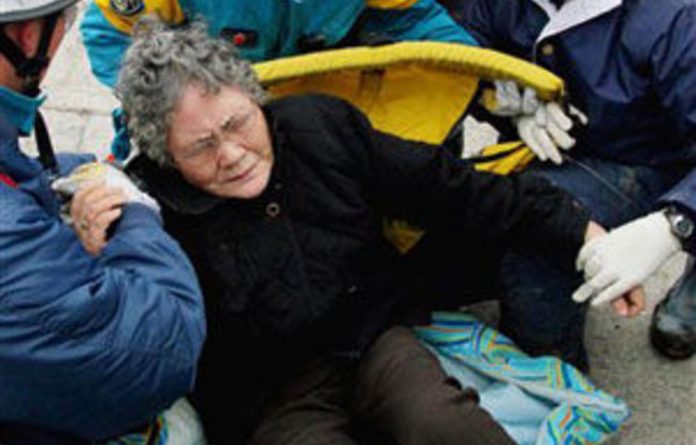 Driving rain on Monday disrupted rescue efforts in Japan and compounded the misery of disaster survivors now fearing radioactive fallout from the smouldering wreck of a nuclear plant.

The bad weather forced Prime Minister Naoto Kan to call off a helicopter flight to the battered north-east coast, including a trip to a football training centre about 20km from the crippled Fukushima number-one plant.

The centre is now a staging area for emergency personnel working to avert a disastrous radiation release from the atomic plant, whose reactors have been overheating after cooling systems were damaged by an earthquake and tsunami.

Engineers have laid an external electricity supply to reactor number two and may be able to restore power to its control room later on Monday, Japan’s nuclear safety agency said.

Equipment likely to be switched back on includes temperature and pressure instruments as well as the air filtering system, which is designed to prevent radioactive substances entering the control room.

“As a result, the environment for workers will significantly improve,” an agency official told a news conference.

Deadly disaster
Power to the reactor’s actual cooling unit has yet to be restored, and in the meantime fire trucks continue to spray water to help cool reactor fuel pools.

Asked on CNN if the worst was over at the ageing facility, US Energy Secretary Steven Chu said: “We believe so, but I don’t want to make a blanket statement.”

The March 11 natural disaster — Japan’s deadliest since 1923 — has left 8 649 people dead and 13 262 missing after entire communities were swept away by the horrific tsunami or levelled by the record 9,0-magnitude quake.

The World Bank said the disaster could cost the world’s third-biggest economy up to $235-billion. That would be the equivalent to 4% of output, in an economy that has already been struggling for years.

But growth should pick up in subsequent quarters “as reconstruction efforts, which could last five years, accelerate”, the bank said in a new report on the Asia-Pacific region.

Tokyo financial markets were closed on Monday for a national holiday. They took a pummelling for most of last week, driving global markets lower, before rallying on Friday when the G7 pledged currency intervention to curb the yen.

They were in the kitchen when their house in Ishinomaki city collapsed but the teenager was able to reach food from the refrigerator, helping them survive for nine days, broadcaster NHK quoted rescuers as saying.

But with nearly half-a-million tsunami survivors huddled in threadbare, chilly shelters and the threat of disaster at the nuclear plant stretching frayed nerves, the mood across Japan remained grim.

Food contaminated with radiation was found for the first time outside Japan — where milk and spinach have already been tainted by a plume from Fukushima — as Taiwan detected radioactivity in a batch of imported Japanese fava beans.

Traces of radioactive iodine have been found in Tokyo tap water, far south-west of the atomic power plant on the Pacific coast, and authorities told residents of one village near the plant not to drink their tap water.

Leaden skies and pounding rain compounded the gloom and hindered search-and-relief efforts in the prefecture of Miyagi, where the police chief believes the final quake-tsunami death toll could reach 15 000.

“We have been using helicopters to deliver relief goods to some places but for today we have to switch the delivery to places that we can reach by road,” he said.

Monitoring radiation levels
While authorities in Japan and beyond have played down the threat of radiation from the Fukushima plant, the rain was doing nothing to ease public jitters.

“The prefecture is giving advice on how to cope with the rain through newspapers and TV programmes, such as telling people to avoid exposure to rain as much as possible and to wipe dry after getting wet.”

At Fukushima prefecture’s 12 monitoring points, the highest level of radiation was detected in the village of Iitate where a reading of 12.10 microsieverts per hour was recorded at 8am.

The prefecture said the level was elevated but still far below that of an X-ray — 600 microsieverts — and did not pose a danger to health. — AFP

Limpopo: 0. Mpumalanga: 0. That’s how many radiation oncologists these provinces have

Battle over cellphone masts in Northcliff