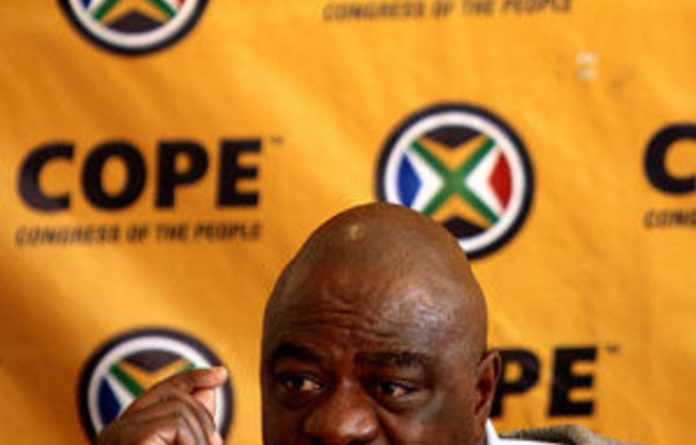 The Mbhazima Shilowa-aligned faction of the Congress of the People (Cope) will meet on Monday to discuss a way forward, the secretary general of the faction said on Friday.

This, after a high court ruling that put the leadership battle between Shilowa and co-founder Mosiuoa Lekota on hold.

The Western Cape High Court ruled on Thursday that the leadership battle between Lekota and Shilowa be put on hold until the finalisation of a matter involving an interim interdict against Shilowa, granted by the South Gauteng High Court in Johannesburg.

“The Congress of the People [Shilowa’s faction] is content with the Cape High Court judgment, which has effectively put our matter in abeyance pending the proceedings of the Gauteng South high court,” said Nikiwe Num.

“The leadership of Cope [Shilowa’s faction] will meet on Monday [March 28] and deliberate on these matters so that a clear way forward is crafted and our people are mobilised to defend their organisation,” Num said.

The high court in Johannesburg’s order bars Shilowa from performing any party duties or attending Parliament as a member of the party.

It was granted after an internal disciplinary committee found him guilty of wrongfully authorising the transfer of R5-million from the parliamentary allowance accounts to Cope party accounts.

It also found him guilty of authorising a payment of over R2-million for purposes that were not legitimate or permissible.

Guilt denied
Shilowa has consistently denied guilt and refused to participate in the disciplinary hearings. In court on Thursday it emerged that Shilowa had not yet contested the interdict.

Instead, MP Mluleki George and six other Shilowa-aligned Cope leaders approached the Western Cape High Court on behalf of the party on February 25 to declare invalid Lekota’s presidency and the leadership agreed upon at the party’s founding congress in Bloemfontein in December 2008.

They want Shilowa and his leadership recognised as being legitimate.

They also want the court to set aside suspensions effected by Lekota and his group and to bar them from submitting lists of names to institutions of governance like the Independent Electoral Commission (IEC) and Parliament, and concluding agreements on behalf of the party.

The judge ruled that it was “undesirable” for one court to hear the same matter pending in another court and postponed the case until a possible outcome of the case in the South Gauteng High Court.

Num said that while the matter before the South Gauteng High Court did not involve any of Shilowa’s supporters, the court had suggested that they join him in those proceedings.

“We will follow the court’s ruling and enjoin him in the proceedings. We are resolute in defending the organisation and strongly believe that any court that is faced with the merits of the matter will no doubt agree with us that we are the legitimate custodians of our movement.”

Lekota’s spokesperson, Phillip Dexter, said the party would submit its party lists to the IEC on Friday and would begin to finalise its preparations for the May 18 elections.

“This development means that Cope will finalise its preparations for the local government elections despite all the desperate attempts by these renegades to destroy the party’s chances.

“But this would never have affected the party lists. I don’t know why everybody keeps on bringing this up. The IEC has said it recognises the leadership under Mosiuoa Lekota. We will submit party lists today [Friday].”

Earlier this month, IEC commissioner Terry Tselane said the IEC was operating with information submitted to it by Cope before the 2009 elections.

“There is a particular leadership that Cope said this is the authorised leadership, so until such time that there are changes we will continue to operate on the basis [of the information] that they have submitted to us [before the 2009 elections],” he said. — Sapa