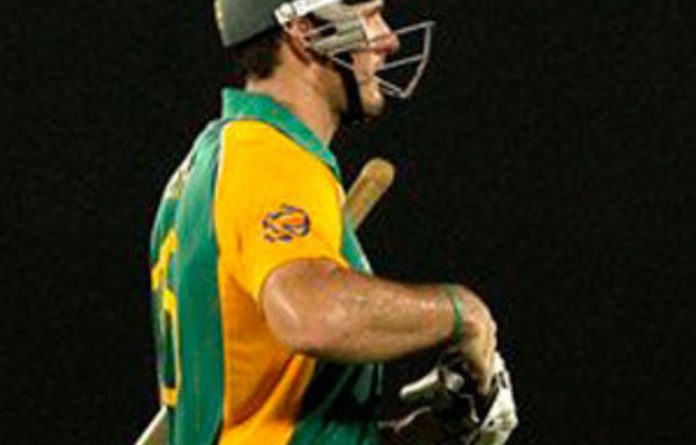 New Zealand stunned South Africa on Friday by knocking the form team out of the World Cup in the third quarterfinal.

South Africa have now lost all five of their knockout matches since they first played at the tournament in 1992 while underdogs New Zealand advance to the semifinals for the sixth time.

Man-of-the-match Jacob Oram took two brilliant catches and captured four for 39 with his naggingly accurate medium pace after the South Africans appeared to be cruising to victory in pursuit of a modest victory target of 222.

The South Africans had reached 108 for two shortly before the halfway point with their premier batsman Jacques Kallis well set on 47.

But Kallis was magnificently caught on the boundary by Oram off Tim Southee, JP Duminy was bowled for three and AB de Villiers run out two balls later for 35.

New Zealand, who had fielded tenaciously and bowled with spirit, piled on the pressure with Oram snapping up two more quick wickets.

Faf du Plessis, who was dropped by Oram on 29, hit the New Zealander for six off the next ball before holing out to Southee for 36. Morne Morkel (3) was the last man to fall as South Africa collapsed for 172 off 43.2 overs.

Jesse Ryder anchored the New Zealand innings with 83, his maiden World Cup half-century. But although the Kiwis became the only team in the tournament to bat through their overs against South Africa their eventual total of 221 for eight seemed well short of a challenging total.

But their inability to cope with intense pressure plagued them yet again to leave the Black Caps with a semifinal date against either Sri Lanka or England who play on Saturday.

“There are no words to describe how I feel,” said Smith.

“We just have to take it on the chin. It was a very disappointing evening. I thought we bowled pretty well and when we were 100 for 2, we were sitting well, and then we lost too many wickets.”

Smith was mystified by a World Cup record which shows South Africa having failed to win any knockout game in the tournament since their 1992 debut.

“Your guess is as good as mine. It’s been happening since 1992. We just weren’t good enough tonight, but we have to take it forward and not get bogged down,” said Smith who has played his last one-day international.

“There will be a new coach and new captain. We are disappointed with tonight, and nothing I say is going to change that for fans back home.”

New Zealand captain Daniel Vettori praised his team’s spirit in the field especially when they had to defend a modest total.

“Every single bowler stepped up today, and probably it was the fielding that got us through,” said Vettori.

“Once we got 220, we knew we had to be aggressive. We were hanging in there. We knew it was a tricky wicket and it was going to be an old-school one-day game.”

New Zealand will now meet the winners of Saturday’s quarterfinal between Sri Lanka and England in Colombo next Tuesday. — Reuters, AFP