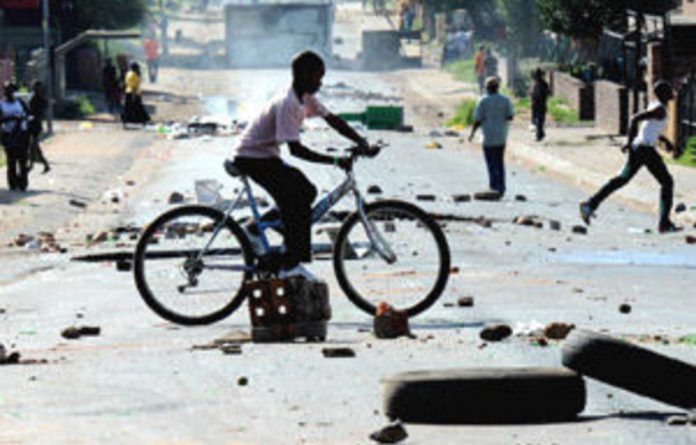 The 26-second video, shot in the Wesselton’s Thusi section on February 16, two days after the protests began, shows a young man rolling on the ground while being trailed by armed TRT members, one of whom is perched on the police vehicle’s bonnet. According to the man who captured the footage on his cellphone, the youngster in the clip was coming from the nearby shops with a female friend when he was summoned to the officers’ vehicle, questioned and allegedly shot at several times with rubber bullets.

He was then forced to roll on the dusty street for a considerable distance. Except for the marked white BMW cruising behind the police officers and their victim, the streets appear lifeless, suggesting that reports of curfews and intimidation by police were not exaggerated. “They didn’t want anybody on the streets that day,” said the film’s source, who asked to remain anonymous. “That guy wasn’t the only one [who was assaulted]. A lot of people were being ejected from shops and forced to roll on the ground. My brother was sjambokked.”

Dumisani Mahaye, who was widely quoted in the press during the uprisings and was arrested on February 20 for public violence, said that on February 16, the day the footage was shot, protests had died down as people felt that their outrage had been communicated. Residents were also expecting the arrival of police commissioner General Bheki Cele, who visited Wesselton on that day.

Earlier that week more than 160 tactical response members were deployed to the township. “People were tired [because of the preceding two days of protests] but the police were out in full force, shooting anyone they saw on the streets with rubber bullets,” said Mahaye. “They were also conducting door-to-door raids. In one incident they even arrested an 80-year-old woman, who is appearing in court with us next Monday.”

Paid to initiate riots
When Mahaye was arrested on February 20, he said, he was interrogated about his role in the protests, tortured and forced to sign statements implicating ANC provincial executive committee members Lassy Chiwayo and Fish Mahlalela as the pair who had paid him to initiate the riots. In a report in City Press last Sunday, Independent Complaints Directorate (ICD) spokesperson Moses Dlamini confirmed that the institution was investigating complaints by Chiwayo and Mahlalela, who are political adversaries of Mpumalanga premier David Mabuza.

In spite of the widespread claims of torture many of the victims and detainees have not lodged complaints with the ICD, the Mpumalanga branch of which is based in Nelspruit, about 170km from Ermelo. Many cite a lack of resources as the reason, while others say that they have no confidence in the ICD.

Mahaye said that he had laid complaints of assault, damage to property and being forced to make a statement only because someone had given him a lift on Thursday. Mpumalanga SAPS provincial spokesperson Brigadier Lindela Mashigo said the TRT was deployed following damage to property and attacks on the media and on the police, which had resulted in the hospitalisation of an SAPS member.

Mashigo said police management was concerned about the video and was investigating to determine the authenticity of the footage. “If found to be true, corrective action will be taken against the member(s) involved as captured on the clip. The individual subjected to this unacceptable behaviour is urged to come forward to lay a complaint or approach the ICD.”

The amateur footage coincides with media reports that so-called third-degree methods by the SAPS are on the increase. The Sunday Independent reported last weekend that in 2009-2010 the ICD investigated 920 severe assault cases, compared with 255 in 2001-2002. The report said that the number of fatal shootings investigated rose to a record high of 556 in 2008-2009, from 281 in 2005-06. The statistics were compiled by Centre for the Study of Violence and Reconciliation researcher David Bruce.

In a report titled “An Acceptable Price To Pay?” Bruce reports that the ICD secured 63 murder convictions between 2002-2003 and 2008-2009, 18 convictions for assault with grievous bodily harm and 12 convictions for common assault. The total number of convictions obtained for murder or culpable homicide over the six years in question represents roughly 3,6% of deaths in police hands in that period.

At least two people were killed during the uprisings in Ermelo in February. Police have confirmed that the shooting of Solomon Madonsela during a protest is being investigated by the ICD.