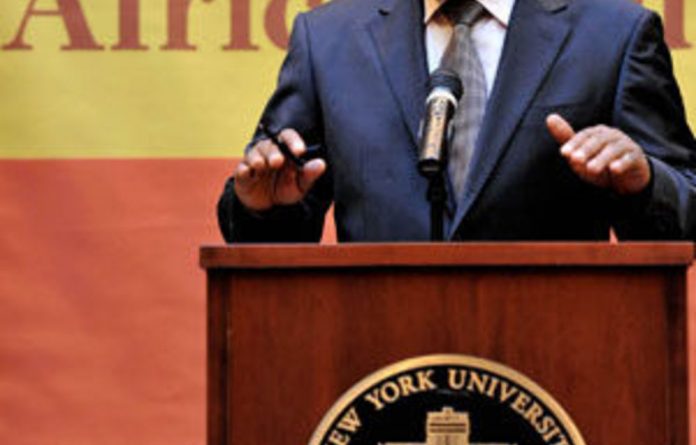 Motlanthe was speaking at New York University on South Africa’s economy and the African Diaspora.

After his speech, Motlanthe took a question from the American audience on Planning Minister Trevor Manuel and “racism and colourism”.

Manuel recently had a public spat with government spokesperson Jimmy Manyi over comments the latter had made in the past about coloured South Africans.

Motlanthe said there were people who were seeking to undermine affirmative action who were taking advantage of Manyi’s remarks. He did not name specific people or organisations.

“They wait for a black person, who sees things in black and white, to make a statement and then they say, ‘That is racism in reverse’,” Motlanthe told the audience.

He joked that while it was difficult to find a white person who supported apartheid, there were still some who wanted to “backslide”.

“You will not find one single white South African who ever supported apartheid. Not one. All of them had black friends,” said Motlanthe to the audience’s laughter. “But some people will want to backslide.”

Motlanthe argued that affirmative action was a method of amending economic inequalities that were the legacy of apartheid.

Press freedom
The deputy president also took a question from the Committee to Protect Journalists Africa advocacy coordinator Mohammed Keita. He asked whether the perception that South Africa as a “haven for press freedom” was in danger.

Motlanthe used his own experience in his answer and recounted how a report had been published that he had impregnated a 24-year-old woman. The story was later retracted.

“One morning I woke up to see a headline that read, ‘President impregnates 24-year-old’,” he said.

“Not a word to check with me — they did not ask me if I know this girl.” He said that while the article was retracted, the retraction publication was not as prominent as the initial headline.

Motlanthe told the audience that the media had “conflated” the proposed appeals tribunal with the Protection of Information Bill — and said this would kill press freedom.

“They were not debating the issue and instead waged a campaign,” he said.

The deputy president said the ANC was “not in a hurry” to pursue the tribunal while the print media attempted to strengthen its self-regulatory mechanisms.

“If indeed the print media is able to expand the capacity of the press ombudsman and give equal prominence to the retractions, I’m sure the ANC will say in its next conference that there is no need for this resolution,” said Motlanthe.

One question Motlanthe was not asked was on the issue of nationalisation of mines, which is being debated within the ANC.

Spokesperson Thabo Masebe said the investors meeting with the deputy president had not raised the issue as they knew it was not government policy.

Motlanthe was introduced to the audience by Minister of Higher Education Blade Nzimande.

Nzimande called his task “an easy one” because “[Motlanthe] is modest and he wants you to get to the point.”

Motlanthe himself was warmly received by the audience and cracked jokes easily during the question-and-answer period.

At one point, he was interrupted by the screech of drilling from the next room.

“Someone’s tooth is being extracted,” he quipped. — Sapa