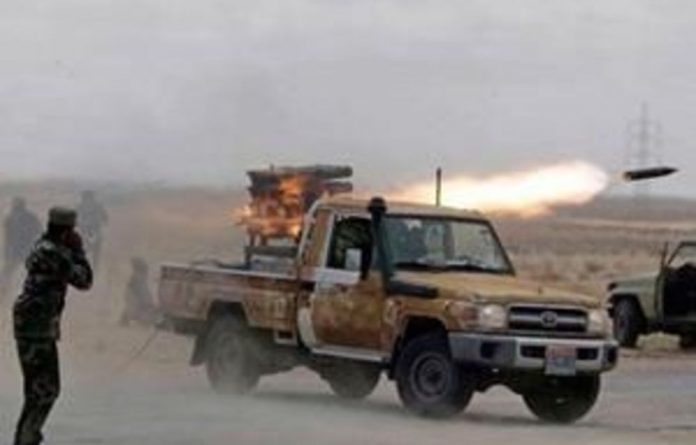 The noose is tightening around Libyan leader Muammar Gaddafi and his family after his foreign minister and another top diplomat defected in the highest-level desertions since the start of a civil war.

But Gaddafi’s spokesman vowed on Thursday that the “brother leader” would fight on unbowed.

“Rest assured, we are all here. We will remain here until the end. This is our country. We are strong on every front,” government spokesman Mussa Ibrahim said in the Libyan capital.

Foreign Minister Moussa Koussa, a former spy chief and a close Gaddafi adviser since the 1970s, slipped out of the country to Tunisia and flew to Britain on Wednesday in a stunning blow to Gaddafi.

He was being debriefed by British intelligence officials on Thursday, a source familiar with the matter said.

“It shows that now Gaddafi is losing some key components of his most important historical power base, his comrades in the revolutionary committee movement that were with him from the start,” said Saad Djebbar, a London-based analyst on North Africa and former legal adviser to Libya.

On Thursday, Ali Abdussalm Treki, a former foreign minister who had been appointed Libyan ambassador to the United Nations, said he had resigned over the “spilling of blood” by government forces and would work at “saving this precious nation”.

Treki announced his move in a statement in Cairo sent to Reuters by his nephew, Soufian Treki, a Libyan diplomat at the Arab League.

A Western diplomat said Koussa’s defection was significant because it sent a message to other Gaddafi loyalists that they could still get sanctuary, even if they were associated with the bloody crackdown on Gaddafi’s opponents.

British Foreign Secretary William Hague encouraged others around Gaddafi to follow suit and said: “Gaddafi must be asking himself who will be the next to abandon him.”

However, he also said Koussa would not be granted immunity from prosecution by the International Criminal Court, which is investigating possible war crimes in Libya. Indeed Scottish justice authorities said he faced questioning over the 1988 Lockerbie bombing of a US airliner over Scotland, which killed 259 people on the plane and 11 on the ground.

Some Western officials and analysts say the risk of landing in court in The Hague is an obstacle to persuading Gaddafi and his entourage to go into exile, and other top aides to defect.

Turkish Foreign Minister Ahmet Davutoglu told Reuters in an interview that his country had been negotiating a possible peaceful exit for Gaddafi last month but the referral of the Libyan situation to the court had complicated matters.

“Now we have other difficulties to make this possible because of the ICC aspect,” Davutoglu said.

Government collapsing?
The Libyan opposition named other top officials they alleged were waiting to flee.

“The government of the tyrant is collapsing around him,” the Democratic Libya Information Bureau said in a statement. “Koussa’s defection also provides the coalition with a figure of unparalleled intelligence value in terms of understanding the situation within the tyrant’s inner circle.”

The current head of intelligence, the oil minister, the secretary of the General Peoples’ Congress [Parliament] and a deputy foreign minister were among senior Libyan government figures waiting to fly to European capitals, it said.

Such reports cannot be verified. Other opposition sources have said that Gaddafi is keeping ministers and senior officials under close watch near or in his family’s compound.

And although Gaddafi has not been seen in public since a televised speech at his compound on March 23, four days after the start of Western military action, Libya’s call to rally against foreign aggression could continue to find support.

“The narrative of foreign attack is very powerful in Libya,” said Richard Dalton, a former British ambassador to Tripoli. “A lot of people will feel that they have to hang together, or they would have to hang apart.”

Djebbar said power had shifted in recent years from Gaddafi’s historic comrades in the revolutionary committees to his sons, cousins and tribe, who controlled the guns and money.

Neogtiated exit?
One of the world’s longest serving rulers, Gaddafi seized power in 1969, the same year as Richard Nixon took office as US president.

Since protests against Gaddafi intensified earlier this year, foreign diplomats have tried to negotiate his exit.

Davutoglu said the Turkish government had tried since last month to negotiate with Gaddafi to step down voluntarily.

“It was almost one month ago in the early days of the crisis our prime minister tried to open ways for a peaceful transformation in Libya, when the clashes were continuing, and attacks on civilians were continuing,” he told Reuters.

“The effort of Turkey was for an exit strategy, like in Tunisia and Egypt, a transition and the handover of power to an elected leader or administration.”

Rebels say they are not willing to bend on the issue of bringing Gaddafi and his top aides to justice.

Inner circle defections in wartime carry big risks — as does loyalty to a losing dictatorial cause.

One of Saddam Hussein’s most loyal lieutenants Tariq Aziz, stood with the Iraqi leader through two US-led wars. A post-Saddam Iraqi court sentenced him to death last year.

Nazi dictator Adolf Hitler’s deputy, Rudolf Hess, flew alone to England in 1941, ostensibly on a solo peace mission. He spent the rest of his life in an allied prison, dying in 1987, the longest imprisonment of any of the German wartime leaders.

Public mood
With tight restrictions on reporting in government-held areas of Libya, it is hard to measure public support for Gaddafi, but it is clear that hardships are on the rise.

In the capital Tripoli, hundreds of cars spend hours waiting for gasoline, some even queuing overnight. Long queues extend outside bakeries, which have been hit by the departure of many foreign workers and where bread is rationed.

Some residents have reported difficulty in buying staples such as cooking gas, sugar and cooking oils, and have complained of price rises and hoarding. Many stores are closed.

The streets of Tripoli appear more subdued in recent days, with fewer people out in public waving green flags. Even weekly prayers last Friday at a Tripoli mosque broadcast on Libyan state television appeared to attract only a few dozen faithful. – Reuters