Libya rebels say no to transition under Gaddafi son 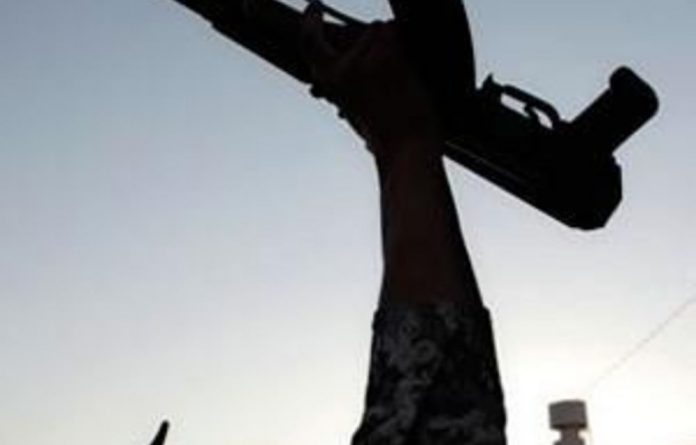 Libyan rebels insisted on Monday that the whole Gaddafi family must leave before there can be any truce with regime forces amid reports that Muammar Gaddafi’s sons are offering to oversee a transition.

Rebel troops made a new attempt to recapture the oil town of Brega, advancing under artillery fire, as hundreds wounded in besieged third city Misrata were evacuated by ship.

Greece’s foreign minister said after a meeting in Athens between the prime minister and a Libyan envoy that Gaddafi’s regime is “looking for a solution”.

The New York Times reported that two of his sons were offering to oversee a transition to a constitutional democracy that would include their father’s removal from power.

But the rebels swiftly rejected any deal that involved the Gaddafi family.

“Gaddafi and his sons have to leave before any diplomatic negotiations can take place,” said the spokesperson of the rebels’ Transitional National Council, Shamseddin Abdulmelah.

‘How can you negotiate at the point of a gun?’
The rebel spokesperson said the regime had lost any right to talk of a negotiated exit after it had continued to pound Misrata even as it sent Deputy Foreign Minister Abdelati Laabidi to Athens to discuss a way out of the conflict.

“How can you negotiate at the point of a gun?” he asked.

Citing an unnamed diplomat and a Libyan official briefed on the Gaddafis’ proposals, the New York Times said that the transition would be spearheaded by one of the veteran strongman’s sons, Seif al-Islam.

But Abdulmelah said that Seif al-Islam had shown through his conduct since the uprising began on February 15 that his reputation as someone who wanted to change the regime from within was completely baseless.

“People thought he was a reformer but since the revolution began, he has shown his true colours. He is a carbon copy of his father,” the spokesman said.

Laabidi was to travel on Monday to Turkey and then on to Malta after his visit to Athens, which came at Libya’s request.

“According to what the Libyan envoy said the regime seems to be looking for a solution,” Greek Foreign Minister Dimitris Droutsas said in a statement after Sunday’s meeting between Laabidi and Prime Minister George Papandreou.

Heavy fire
Rebel fighters came under heavy artillery fire from Gaddafi’s forces as they pushed towards Brega on Monday after having beaten a scattered retreat from the oil town the previous day.

A column of fighters moved to within 1km of Brega university, where they set up a checkpoint, before Gaddafi forces began shelling them, an Agence France-Presse correspondent reported.

Black smoke billowed across the hills on the edge of the town but it was unclear if the rebels were firing back with anything more than small arms.

Intermittent explosions had rumbled across the desert landscape on Sunday as the rebel vanguard traded rocket and artillery fire with Gaddafi forces inside the town.

Brega, 800km east of the capital, Tripoli, has been the scene of intense exchanges for several days, with both sides advancing, only to withdraw again later under fire.

More than 250 patients were brought from Misrata to the rebel port of Benghazi on Sunday on board a Turkish aid ship, which was to pick up another 60 or so wounded people from the eastern front before steaming on to the Turkish port of Cesme.

Those on the aid ship, many torn apart by shrapnel and bullets, told of a city under lockdown that has gone weeks without electricity or running water, where snipers have emptied the centre, and mortar rounds and rockets rain down at random on residents huddled inside their homes.

Gaddafi’s forces besieging Misrata, 215km east of Tripoli, have been targeted by air srtikes launched by US, British, French, Canadian, Danish and Belgian jets since March 19 under a UN mandate to use “all necessary measures” to protect civilians, but the siege has not been broken.

The US military had planned to begin withdrawing its combat jets and Tomahawk missiles from the air campaign at the weekend as Nato allies were to take the lead in bombing Gaddafi’s forces.

But the Pentagon announced on Sunday that the US involvement would continue through Monday at Gaddafi’s request, because of “recent poor weather in Libya”.

Defection
Gaddafi’s regime was hit by another defection.

The defection of Gaddafi’s top officials has been seen as a sign his regime is crumbling and that he is becoming more and more isolated.

Doctors said last week that 200 people had been killed in Misrata since the fighting began, a figure that is likely to have risen in recent days.

Rebels control the eastern and northern areas of the city, which is dotted with checkpoints manned by teenage gunmen in chequered scarves, according to an AFP correspondent who was briefly able to enter last week.

It is the last major bastion of the rebellion in the western half of the country, while in the east Gaddafi’s forces have halted the poorly trained and disorganised rebels at Brega.

Turkey organised the aid ship, which also brought medical and other basic supplies to the besieged city, for “humanitarian purposes”, Ali Davutoglu, the Turkish consul general in Benghazi, told reporters.

About a dozen doctors and nurses on board will tend to the patients until they reach Turkey, performing surgery if necessary, before transferring them to hospitals. — AFP