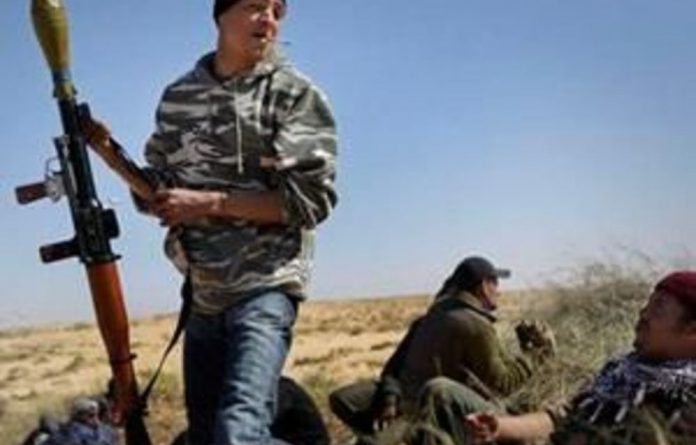 Forces loyal to Libyan leader Muammar Gaddafi are staging a “massacre” in the besieged city of Misrata, evacuees said on Monday, as Libya said it was ready to discuss political reform, led by Gaddafi.

Libyan TV showed footage of Gaddafi saluting supporters outside his fortified compound in Tripoli. But some residents of the capital, angered by fuel shortages and long queues for basic goods caused by a popular revolt and Western sanctions and air strikes, began openly predicting his imminent downfall.

“We could have any political system, any changes: constitution, election, anything. But the leader has to lead this forward,” he told reporters when asked about the content of negotiations with other countries.

With Libya in chaos, an official in neighbouring Algeria told Reuters al-Qaeda was exploiting the conflict to acquire weapons, including surface-to-air missiles.

The US State Department said it had raised concerns with the Libyan rebels about the Islamist group obtaining arms in the east of the country, where they are battling Gaddafi’s forces.

Evacuees from Misrata, the rebels’ last major stronghold in western Libya, described the city as “hell”. They said Gaddafi’s troops were using tanks and snipers against residents, littering the streets with corpses and filling hospitals with the wounded.

“You have to visit Misrata to see the massacre by Gaddafi,” said Omar Boubaker, a 40-year-old engineer with a bullet wound to the leg, brought to the Tunisian port of Sfax by a French aid group. “Corpses are in the street. Hospitals are overflowing.”

Misrata rose up with other towns against Gaddafi last month but most others have been retaken by government forces.

“I could live or die, but I am thinking of my family and friends who are stranded in the hell of Misrata,” said tearful evacuee Abdullah Lacheeb, who had serious injuries to his pelvis and stomach and a bullet wound in his leg.

“Imagine, they use tanks against civilians. He [Gaddafi] is prepared to kill everyone there.”

Gaddafi greeting
State TV showed what it said was live footage of Gaddafi briefly waving to supporters through the roof of a Jeep outside his compound while bodyguards tried to prevent them mobbing him.

But in the lanes of Tripoli’s medieval market, some openly forecast his fall as rebels battle his forces in eastern Libya.

“People from the east will come here. Maybe in two weeks,” said one entrepreneur who asked that his name not be used for fear of reprisals. “But now, people are afraid.”

Stalemate on the frontline in the east, defections from Gaddafi’s circle and the plight of civilians caught in fighting, or facing shortages, have prompted a flurry of diplomacy.

Turkey said it was seeking to broker a ceasefire as an envoy from Gaddafi’s government travelled to Ankara from Athens.

“Turkey will continue to do its best to end the suffering and to contribute to the process of making a road map that includes the political demands of Libyan people,” Foreign Minister Ahmet Davutoglu said.

Turkey also expected envoys from the rebel National Council soon, he added. A Turkish official said both sides “conveyed that they have some opinions about a possible ceasefire”.

Italy says Gaddafi must go
Spokesperson Ibrahim said Libya was ready to listen to outside reform proposals and “try our best to meet you in the middle”.

But he added: “No one can come to the Libyan nation and say to them: ‘You have to lose your leader, or your system, or your regime’ … Who are you to say that?”

Italian Foreign Minister Franco Frattini dismissed Libya’s stance. “A solution for the future of Libya has a pre-condition: that Gaddafi’s regime leaves and is out and that Gaddafi himself and his family leave the country,” he said.

In Washington, the US Treasury said it had lifted sanctions against former Libyan foreign minister Moussa Koussa in the hope that other senior officials would defect.

Scottish police, who want to question him over the 1988 Lockerbie airliner bombing, for which Libya accepted responsibility and paid compensation to relatives of the 270 dead, were expected to meet him within days.

UN-mandated air strikes to protect civilians, led by the United States, France and Britain, have so far failed to halt attacks in Misrata by the Libyan army.

At least five people died when Gaddafi’s forces shelled a residential area of the city late on Monday, a doctor said.

“The reception in the hospital is full. Five people were confirmed killed in the last two hours and five more are in a critical condition,” the doctor, who gave his name as Ramadan, told Reuters by phone from the city.

Libyan officials deny attacking civilians in Misrata, saying they are fighting armed gangs linked to al Qaeda. Accounts from Misrata cannot be independently verified as Libyan authorities are not allowing journalists to report freely from there.

A Turkish ship that sailed into Misrata to rescue 250 wounded was protected by Turkish warplanes and warships and had to leave in a hurry after thousands pressed forward on the dock, pleading to be evacuated. Another ship operated by Medecins Sans Frontieres docked in Sfax with 71 wounded from Misrata.

Abdel Rahman, a witness from Zintan, another rebel hold-out 160km south-west of Tripoli, said the situation there was grim.

“Gaddafi’s militias are still besieging the town. Petrol is running short and most cars are parked. Few people drive their cars. We are also worried that if this goes on for much longer, we will have food shortages too … Coalition aircraft fly over but they don’t hit the tanks, military vehicles and soldiers surrounding Zintan.”

Al-Qaeda convoy
In Algiers, a senior security official said that Al-Qaeda in the Islamic Maghreb (AQIM), the Islamist group’s regional wing, was getting hold of weapons in eastern Libya.

The Algerian official, speaking on condition of anonymity, said a convoy of eight Toyota pick-up trucks had left eastern Libya and headed via Chad and Niger to northern Mali, where in the past few days it had delivered a cargo of weapons.

“We know that this is not the first convoy and that it is still ongoing,” the official said. “Several military barracks have been pillaged in this region [eastern Libya] with their arsenals and weapons stores, and the elements of AQIM who were present could not have failed to profit from this opportunity.”

In Washington, State Department spokesperson Mark Toner said the United States had raised its concerns with the rebels.

Gaddafi says the uprising is fuelled by Islamist radicals and Western nations who want to control Libya’s oil. The rebels, whose stronghold is the eastern city of Benghazi, say they only want the removal of Gaddafi and his circle.

After chasing each other up and down the coast road linking the oil ports of eastern Libya with Gaddafi’s tribal heartland further west, the two sides are stuck around Brega, a sparsely populated settlement spread over more than 25km – Reuters