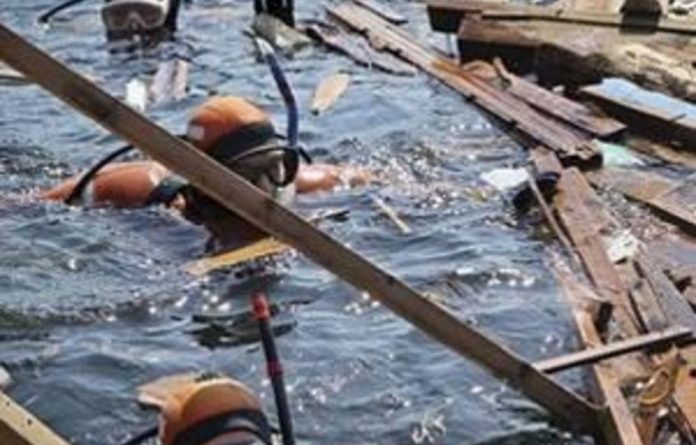 But in an illustration of how fragile progress is at the Fukushima plant, operator the Tokyo Electric Power Company (Tepco) said it was concerned a build-up of hydrogen gas at a different reactor could cause another explosion at the site.

The water leak was thought to be a source of spiking radiation levels in the sea, which prompted Japan to announce its first seafood radiation safety standards following the discovery of fish with high levels of contamination.

Tepco workers had injected sodium silicate, a chemical agent known as “water glass”, to solidify soil near a cracked pit where water was escaping into the Pacific.

The pit, which has a 20cm crack in its wall, is linked to the plant’s reactor number two, one of several that had their cooling systems disabled by a catastrophic earthquake-tsunami disaster on March 11.

Several unsuccessful attempts had been made to try to stop the leak, including an effort to seal the crack with cement.

Despite the rare sign of progress at the plant, shares in Tepco continued to tumble on Wednesday, closing down 6,9% at 337 yen, a new record low, amid expectations of huge compensation claims.

Tepco, whose shares have lost about 85% of their pre-quake value, has said it may need state help to meet claims some analysts say could reach 10-trillion yen ($118-billion).

Levels of radioactive iodine-131 and caesium in seawater immediately outside the plant have spiked, raising fears over marine life in a country whose diet depends heavily on seafood.

Tepco officials are also concerned that a hydrogen build-up in the housing around reactor number one could react violently with oxygen, creating an explosion.

On Wednesday they announced plans to begin introducing nitrogen, an inert gas abundant in the atmosphere, which they hope will displace the oxygen.

“We are considering injecting nitrogen into the container of the reactor number one because hydrogen gas has possibly accumulated in the container,” a Tepco official said.

Public broadcaster NHK, citing unnamed sources, said Tepco could start the nitrogen injection at reactor number one on Wednesday evening and was mulling the same procedure at reactors two and three.

In the days after the earthquake and tsunami crippled the plant, large explosions resulted from hydrogen accumulation near the reactors, damaging the outer buildings housing them.

A 20km exclusion zone around the plant has forced tens of thousands of people to evacuate.

The plant has emitted radioactive material into the air, contaminating drinking water and farm produce, with radioactive iodine above legal limits detected in vegetables, dairy products and mushrooms.

Hampering crucial repair work
Nuclear concerns continue to distract from the March 11 disaster that has left more than 12 000 dead and more than 15 000 missing.

Tepco continued a separate operation to release 11 500 tonnes of lower-level radioactive water into the sea to free up urgently needed storage space for water so toxic that it is hampering crucial repair work.

The dumping has angered the fishing industry and on Wednesday Ikuhiro Hattori, the head of Japan Fisheries Cooperatives, visited the company’s headquarters to protest.

Meanwhile, new government figures showed the crisis has slashed the number of foreigners travelling to Japan’s two main airports by two-thirds to a daily average of just more than 5 000.

The wider economic fallout from the quake, tsunami and nuclear crisis is likely to drive the country into recession in the coming months, many economists now say.

Even the brewing industry has been hit, after many Japanese opted to forego the traditional alcohol-fuelled picnics held at this time of year to celebrate the cherry blossom, fearing the parties would be inappropriate.

A series of YouTube appeals from brewers in the worst-hit north-east of the country urged Japanese people to support the north-eastern region by drinking sake at hanami (flower-viewing) parties. — AFP