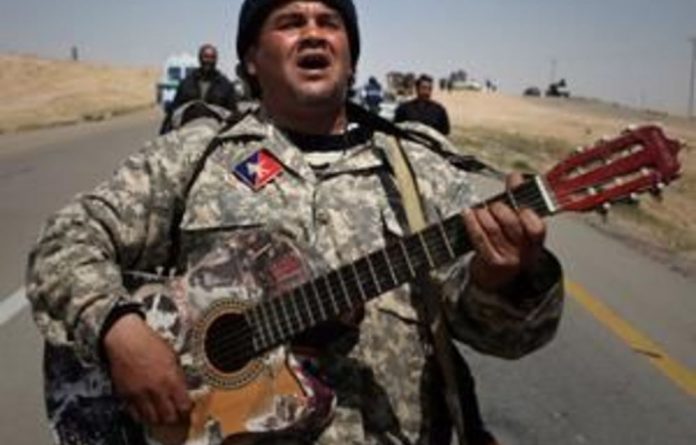 Nato, accused of mission failure by Libya’s rebels, vowed on Wednesday to do all to protect civilians in Misrata as France pledged to open a sea corridor to the besieged Mediterranean city.

On the political front, Libyan Deputy Foreign Minister Khaled Kaim said in Tripoli that Muammar Gaddafi’s regime will talk with the rebels about reforms provided they lay down their arms.

The rebel tirade against Nato came as they sustained their first significant loss of territory to Gaddafi’s forces in almost a week, after they were sent fleeing from the edge of the oil town of Brega in a major assault.

The top commander of rebel forces, Abdelfatah Yunis, accused Nato-led aircraft of doing nothing while loyalist forces kept up their 40-day long artillery bombardment of civilians in Misrata, 214km east of Tripoli.

Nato “is letting the people of Misrata die every day”, Yunis told reporters in the rebel stronghold of Benghazi late on Tuesday.

“If Nato waits one more week, there will be nothing left in Misrata,” he added.

“If Nato wanted to break the blockade of the city, they would have done it several days ago … Every day, civilians — elderly people and children — are dying in Misrata. Nato has done nothing, they have just bombed here and there.”

Doctors said last week that 200 people had been killed in Misrata, Libya’s third largest city, since the uprising began on February 15.

The figure is likely to have risen in recent days.

A Turkish aid ship on the weekend brought out scores of wounded from the city, who told harrowing tales of the bombardment of residential areas by loyalist artillery.

Difficult targets
Nato insisted that the pace of air strikes against Gaddafi’s forces has not slowed down since the 28-nation alliance took command on March 31 of a Western bombing campaign that had been led by the United States.

“Misrata is our number one priority,” Nato deputy spokesperson Carmen Romero said on Wednesday, but acknowledged that the last air strike around Misrata was on Monday.

“We have a clear mandate and we will do everything to protect the civilians of Misrata,” Romero said, referring to the UN Security Council resolution permitting “all necessary measures” to defend Libya’s population.

“We have confirmation that in Misrata tanks are being dispersed, being hidden, [and] humans being used as shields in order to prevent Nato sorties to identify targets,” he said.

Van Uhm said that the international air operation, under Nato command since late last week, had had a major impact.

“We have taken out 30% of military capacity of pro-Gaddafi forces,” said Uhm, citing an assessment by the Libya operation’s commander, Lieutenant General Charles Bouchard.

“We are going to ensure that … aid comes from Benghazi and that at no moment Gaddafi’s military forces will be able to stop this,” he told France Inter radio.

Gaddafi forces on Tuesday pushed back rebels from the oil refinery town of Brega on the central Mediterranean coast, despite a Nato air strike on loyalists, who launched an intensive artillery barrage that sent their foes fleeing towards Ajdabiya, a transport hub about 80km to the east.

On Wednesday morning, rebels were preventing civilians and journalists from leaving Ajdabiya and said both sides were shelling each other at the front, which they said was about 40mk towards Brega.

‘There is no revolution without setbacks’
Khaled Saleh (32), an ex-soldier guarding the checkpoint at Ajdabiya, complained about a lack of Nato airstrikes on Gaddafi’s forces around Brega.

“It was much better when it was America and France [in charge of enforcing the no-fly zone]. They bombed Gaddafi’s forces as you can see here,” he said, pointing to burnt out husks of military vehicles nearby.

“Nato just flies around until they use up all their fuel and then they go home.”

Rebel leaders played down the loss of territory, saying it was unlikely to be the last reverse they suffered before Gaddafi’s regime was overthrown.

“There is no revolution without setbacks,” Mustafa Gheriani, a spokesperson for the rebels’ Transitional National Council, said.

“But the people will win. Gaddafi cannot rule Libya with his machine — his militias and his mercenaries … We are committed to fighting this tyrant, and either we will drive him out or he will rule a country with no people in it.”

In Tripoli, Deputy Foreign Minister Kaim told reporters that if the rebels laid down their arms they could “join the political process”.

He added that the process could be guaranteed by African Union and UN observers “who will dispel any doubts”.

Libyan government spokesperson Mussa Ibrahim had said on Monday that the regime was ready for negotiations on elections or a referendum but that Gaddafi’s resignation was not negotiable. — AFP