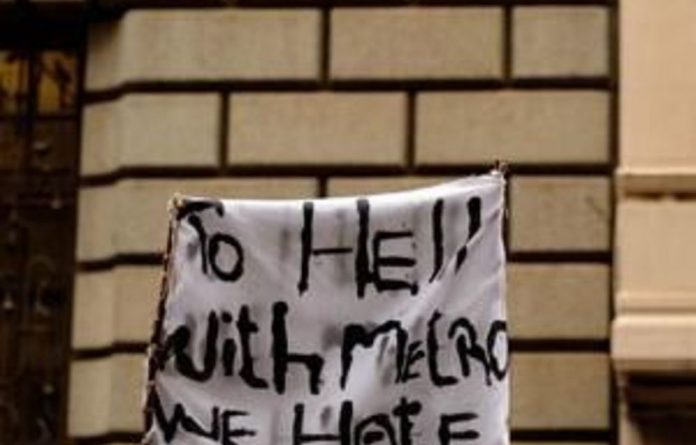 Protesting Johannesburg train commuters on Wednesday called for the reinstatement of Transnet as an operator as they were unhappy with the “unreliable service” provided by Metrorail and the Passenger Rail Agency of South Africa (Prasa).

“We want Transnet reinstated because it is much better and has the experience of running the service,” said Bongani Ntuli, chairperson of the Concerned Commuters’ Organisation of South Africa (CCOSA).

“The people are tired of Metrorail and Prasa.”

These included safety concerns, lack of discipline of drivers and time-keeping issues.

“At certain stops, drivers wait for the next driver to take over and sometimes we have to wait really long,” explained Ntuli. “When there is a breakdown, we have to wait up to seven hours for a technician, from far away, to come … and there is no alternative transport.”

As a result, some passengers were getting to work late and their jobs were in jeopardy.

Ntuli said robbery was rife on trains and that women, who were sometimes delayed while returning home at night, faced being raped.

“We will not allow this to happen to our women. Their safety is important.”

‘Our lives are in danger’
The group, clad in green CCOSA T-shirts and carrying umbrellas, claimed that the trains did not meet safety standards and there were no fire extinguishers in coaches.

“Our lives are in danger because most of the trains and coaches that we travel in every day are old and date as far back as 1958, the 1960s and 1985,” it said in a statement ahead of the march.

“We are told that there is no money for new rolling stock, but more than R25-billion has been spent on the Gautrain, which the working class cannot afford.”

At about 9:30am, Ntuli said drivers at Park Station in Johannesburg refused to allow commuters off the trains because they were headed to the protest.

“This is what I’m talking about when I say they have no discipline,” he said after receiving a call from a commuter who was not being allowed off a train.

“We want drivers with experience.”

Scores of singing and vuvuzela-blowing protesters marched down Pritchard Street in the Johannesburg CBD on Wednesday despite a downpour.

They headed to the Gauteng legislature and at about midday handed over a memorandum of their demands. The crowd began dispersing a short while later.

Pritchard Street was closed off and police monitored the group, with no violence reported.

In its annual financial report, Prasa said it had “inherited from Transnet a business that was poorly managed, neglected and whose financial management systems and internal controls were non-existent and certainly did not meet acceptable record-keeping principles”.

Prasa suspended its Shosholoza Meyl service in August after accusing Transnet of failing to carry out work on Prasa locomotives.

Shosholoza Meyl was transferred from Transnet to Prasa in 2009.

Prasa accused Transnet of charging too much and doing a poor job in maintaining its locomotives.

Transnet denied this and in turn accused Prasa of owing it about R1,3-billion.