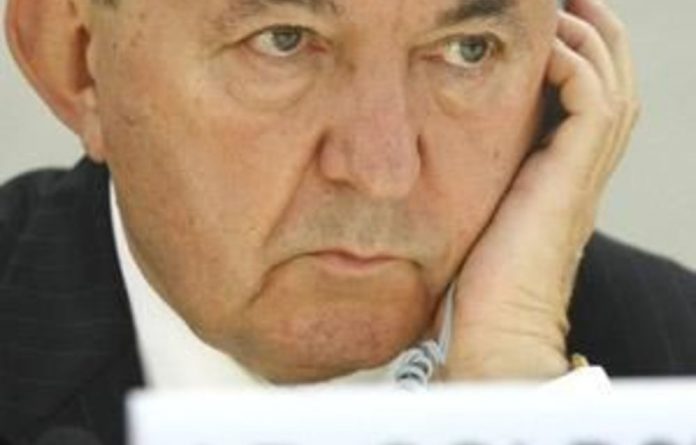 A year ago Richard Goldstone, the eminent judge who headed a United Nations fact-finding mission on Israel’s Operation Cast Lead in Gaza, was told by key players in the South African Jewish community that he should not come to the synagogue where his grandson was due to have his barmitzvah: if Goldstone showed his face, the 13-year-old’s big day would be disrupted by protests.

In the end, the row was resolved, but that is just about the only part of the Goldstone saga that was: the rest remains fiercely contested, for reasons which point to a much larger story than simply the tale of one man and his report.

That battle has been reignited by the op ed piece the judge wrote last week in the Washington Post “reconsidering” his own report and withdrawing what had been his most devastating finding. Goldstone wrote that the latest evidence “indicate[s] that civilians were not intentionally targeted as a matter of policy”.

The import of that sentence can hardly be exaggerated. His original suggestion that Israel had been guilty of “wilful killings” of “protected persons” had been received as the most damning indictment possible, an international mark of Cain on Israel’s forehead. Anti-Israel activists seized on it and many Israel supporters branded Goldstone a traitor, ignoring his own description of himself as a proud Zionist.

Now the two camps are strapping on their rhetorical armour all over again. Israel advocates are savouring the Goldstone semi-retraction as sweet vindication, believing the entire report can now be trashed; Israel’s opponents are looking for charges not withdrawn that still have to be answered.

Key recommendation
One side revels in Goldstone’s bald declaration that “Hamas has done nothing” to follow the report’s key recommendation, namely for both Israel and Hamas to investigate the charges against them. The other notes the gravity of the outstanding claims and the fact that Israel’s own investigations, while numbering 400, have led to all too few prosecutions.

None of this will bring back the more than 700 non-combatants, many of them children, who were killed in Gaza during those appalling winter weeks. Nor will it end the argument, chiefly because, as many have noted, Goldstone was never going to be a cool, legal process but a burningly political one.

That was baked in from the start, in a way that points to a wider, deeper problem. For it was the United Nations Human Rights Council (UNHRC) that commissioned Goldstone and his team to look into Gaza. It sounds like an eminently respectable body — until you look at its record.

A 2010 analysis shows that very nearly half of all the resolutions it passed related to Israel: 32 out of 67. And Israel is the only state to be under permanent review, on the agenda at every meeting.

There is only one country whose rapporteur’s mandate never expires and it’s not Belarus, North Korea or Saudi Arabia, despite their hideous human rights records. It is Israel.

The UNHRC, whose predecessor body was once chaired by Libya, originally asked Goldstone to probe just one side of the Gaza war: it was only the judge’s own insistence that he investigate Hamas too that widened his remit. Goldstone says now of the body that he served that its “history of bias against Israel cannot be doubted”.

In its belief that no country in the world behaves worse or matters more, the UNHRC reflects a view that is widespread. Many respectable people have for decades insisted that the “core issue” in the Middle East, if not the world, is the Israel-Palestine conflict, that it is the “running sore” whose eventual healing will heal the wider region. That was always nonsense, but now the Arab spring has proved it so.

Care for the oppressed
Now the world can see that the people of Egypt, Tunisia, Libya, Yemen, Syria and Bahrain have troubles aplenty that have nothing to do with Israel. There could be peace between Israelis and Palestinians tomorrow, but it wouldn’t relieve those in Damascus or Manama or Sana’a from the yoke of tyranny.

Yet it is not the suffering of these hundreds of millions of Arabs which has attracted the council’s sympathy. Nor has it stirred the compassion of left-leaning people who pride themselves on their care for the oppressed.

So in 2009 Sri Lanka can kill between 7 000 and 20 000 Tamil civilians and displace 300 000 more in its bombardment of the Tamils at about the same time as the Gaza conflict, but there is no Goldstone report on Sri Lankan war crimes.

There is no Goldstone to probe the four million deaths in the Congo, the slaughter in Darfur or the murders in Côte d’Ivoire, or the civilian deaths inflicted by the United States and Britain in Iraq and Afghanistan. No one is proposing an academic boycott of those nations or any of the other serial violators of human rights.

Two members of the four-person board of the Middle East Centre of the London School of Economics and Political Science are firm advocates of cutting all scholarly ties with Israel, but were happy for the college to receive R16-million from the Gaddafi family.

Many will say that there is indeed a double standard, but it benefits Israel, routinely protected by a United States veto at the UN unavailable to weaker states deemed hostile. That may be true of the most powerful Western governments. But when it comes to the academic, cultural and media sphere, the bias often works the other way around.

This is not to deny that there is a desperately serious problem in Israel-Palestine. There is, and Israelis and Palestinians need it to be solved.

I fully understand why Jews and Palestinians regard their conflict as the central issue in the universe. But, for the rest of the world to see it in that way — as those who commissioned the Goldstone inquiry saw it – is indefensible. — Guardian News & Media 2011