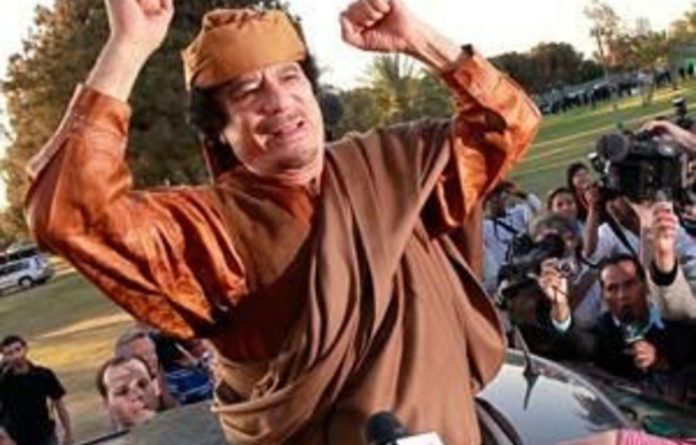 An African Union (AU) bid to halt Libya’s civil war, led by South Africa’s President Jacob Zuma, collapsed within hours on Monday after Muammar Gaddafi’s forces shelled a besieged city and rebels said there could be no deal unless he was toppled.

The rebel rejection came less than 24 hours after Zuma, head of the AU’s mission, said Gaddafi had accepted the plan, including a ceasefire proposal for the conflict in this North African desert state.

As African presidents negotiated with the rebel leadership in their stronghold of Benghazi, insurgents said Gaddafi’s forces had bombarded the besieged western city of Misrata. Rebels there scorned reports Gaddafi had accepted a ceasefire, saying they were fighting intense house-to-house battles with his forces, who fired rockets into the city.

Western leaders also rejected any deal that did not include Gaddafi’s removal, and North Atlantic Treaty Organisation (Nato) refused to suspend its bombing of his forces unless there was a credible ceasefire.

Nato secretary general Anders Fogh Rasmussen told a Brussels news briefing that Gaddafi’s government had announced ceasefires in the past, but “they did not keep their promises”.

Rebel leader Mustafa Abdel Jalil told a news conference after the talks in Benghazi: “The AU initiative does not include the departure of Gaddafi and his sons from the Libyan political scene, therefore it is outdated.”

“Any future proposal that does not include this, we cannot accept,” he said, accusing Gaddafi of bombing, shelling and shooting civilians.

Nato said its air strikes against government armour would press on as long as Gaddafi targeted civilians.

A resident of the coastal city of Misrata, which has been under siege for six weeks, said there was heavy fighting on the eastern approaches and in the centre.

Rebels reported that Gaddafi forces had escalated the assault, for the first time firing truck-mounted, Russian-made Grad rockets into the city, where conditions for civilians are said to be desperate.

Some analysts say Misrata is vital to Gaddafi’s survival because its port supplies his capital, Tripoli.

Zuma did not travel from Tripoli to Benghazi with other AU delegates, to the rebels’ surprise, but issued a statement when he got home saying the mission was “a huge success”.

Libyan officials have repeatedly said that Gaddafi, who holds no official state position, will not quit.

The AU delegation was met in Benghazi by up to 3 000 demonstrators holding banners reading: “African Union take Gaddafi with you” and “Gaddafi has committed genocide”.

They pushed up to the doors of the hotel where the talks were held, yelling “the people want the downfall of the regime”.

Human Rights Watch accused Gaddafi’s forces of indiscriminate attacks on civilians in Misrata which violated international law. It said about 250 people had died.

The AU does not have a good track record in brokering peace deals, having failed recently to end conflicts or disputes in Somalia, Madagascar and Ivory Coast.

At the front outside the eastern rebel-held town of Ajdabiyah, rebels buried the charred bodies of Gaddafi troops killed in air strikes and said they were advancing westwards.

But there were only light skirmishes on Monday on the contested road to the oil port of Brega, 70km further west, in contrast to Sunday’s heavy fighting in Ajdabiyah when rebels repelled a government assault.

In Washington, the White House said coalition forces were not “letting up”.

Nato, which is operating under a United Nations mandate to protect civilians, stepped up attacks on Gaddafi’s armour over the weekend after rebels had accused them of acting too slowly.

The AU proposal included an immediate cessation of hostilities, effective monitoring of the ceasefire, the delivery of humanitarian aid and the protection of foreigners.

The rebels had previously rejected a negotiated outcome to what has become the bloodiest in a series of pro-democracy revolts across the Arab world that have ousted the autocratic leaders of Tunisia and Egypt.

The Nato attacks outside Ajdabiyah on Sunday helped break the biggest assault by Gaddafi’s forces on the eastern front for at least a week. The town is the gateway to the rebel stronghold of Benghazi 150km north up the Mediterranean coast.

On Monday, upbeat rebels were putting burned and mangled bodies into blankets by blackened government vehicles outside Ajdabiyah and dragging them into the desert for burial.

“We have been able to advance because of the air strikes,” said rebel Belgassim El-Awami. It was not clear how far west the rebels had moved along a front which has swung back and forth for more than a week in a fight for the oil port of Brega.

Opposition fighters have been overwhelmed by Gaddafi’s firepower in western Libya, close to his base of Tripoli, but are increasingly using guerrilla tactics to weaken his hold.

Tripoli residents said there had been several attacks on army checkpoints and a police station in the last week and gunfire can be heard at night. — Reuters