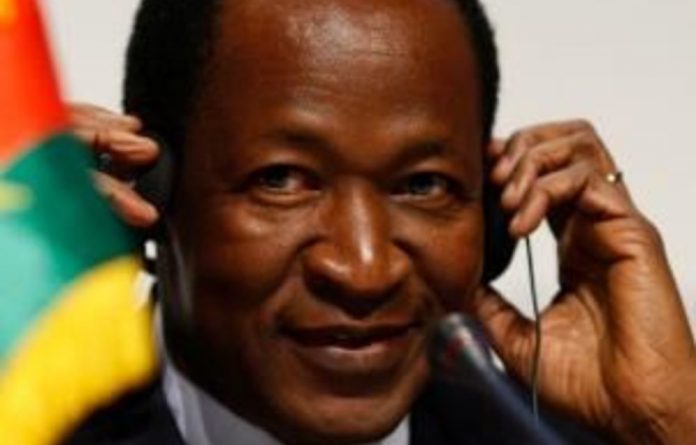 Burkina Faso’s President Blaise Compaore, facing a mutiny by his personal guard, strove to reassert his authority on Friday after mass street protests and a night when soldiers ran riot.

The mutiny broke out on Thursday night in two barracks, including one in the compound of Compaore’s residence in Ouagadougou, and spread on Friday morning to three other army bases in the capital, mutineers and army officers said.

Both sides told Agence France-Presse (AFP) that they were holding talks on the grievances of the soldiers, which included housing and food allowances. Light and heavy gunfire was heard in the early hours and resumed in late morning.

“We’re claiming a lot of things,” including bonuses, one soldier told AFP, asking not to be named. “We’re angry with our commanders. We don’t want to work for them to get rich.”

Leave of absence
Compaore, who has been in power since a 1987 military coup, slipped out of Ouagadougou during the night to spend a few hours in his home town, Ziniare, around 30km north of the capital, a source at his residence said.

Before leaving, the president said “discussions have taken place with the mutineers and they are laying down their arms,” but gunfire could still be heard.

Presidential guard members took to the streets, firing into the air.

Troops also set fire to the home of General Gilbert Diendiere, Compaore’s personal chief of staff, and those of two other officers, an AFP journalist said.

Soldiers also looted many consumer goods’ stores in the city centre and several people, including civilians, were slightly injured.

Shooting the sky
Around 11.30am, an AFP photographer 200m from the Guillaume Ouedraogo base in central Ouagadougou heard more shooting and saw soldiers firing in the air outside the barracks.

“They’re shooting everywhere. People are running to get home,” Souleymane Ouedraogo, who lives near the base, told AFP by phone.

Shooting was heard at the same time around the Sangoule Lamizana base in a western district of the city, according to residents.

“We’re shut into our home. Nobody dares poke their nose outside. I can’t even hear a motorcycle going by,” said one woman resident, by phone.

Closed for business
Most shops, banks, offices and service stations were closed in Ouagadougou, where traffic was thin, apart from soldiers riding around in jeeps and confiscated civilian vehicles, mainly pick-ups.

On Thursday, tens of thousands of people marched in protest against the high cost of living in one of the biggest demonstrations seen in many years in Ouagadougou.

Marches also took place in 10 other towns across the west African country.

Angry precedent
In late March, angry soldiers seized military equipment in several towns including the capital, firing shots in the air. They also looted shops and freed soldiers who had been serving time for rape and other sex crimes.

Compaore, himself a former army captain, met members of the armed forces after the incidents and said the crisis was over after the talks.

The 60-year-old leader was re-elected in the first round of an election last November with more than 80% of the vote. He has won elections since 1991, four years after the coup in which his predecessor and comrade-in-arms president Thomas Sankara was killed.

Compaore has faced a series of protests since February, staged first by students and then by soldiers.

Six people, including four students and a policeman, were killed in riots in late February in the town of Koudougou, 100km west of Ouagadougou, after a student died in disputed circumstances.

High cost of living
Thursday’s marches were organised by the National Coalition against the High Cost of Living (CCVC), an alliance of trade unions, consumer organisations, rights groups and small businesses.

“We came out in the tens of thousands today to shout out that we have had it up to here with the high cost of living,” said CCVC coordinator Tole Sagnon, who also heads up the Burkina General Confederation of Labour.

The veteran leader was due to meet later on Friday at the presidential palace with Choi Young-Jin, the head of the United Nations peacekeeping force in neighbouring Côte d’Ivoire, a source at his residence said. — AFP