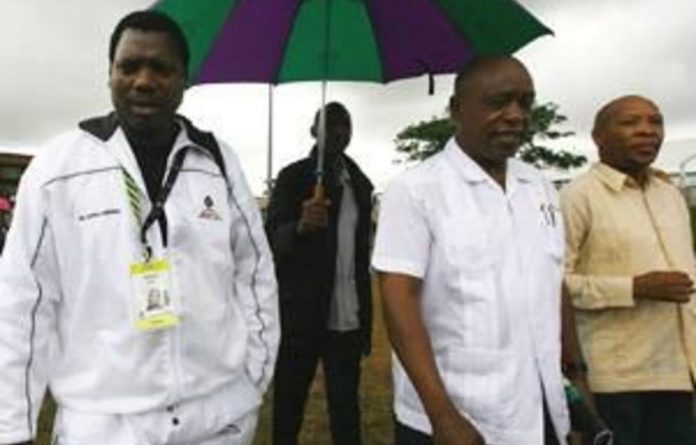 When a sheaf of declassified crime intelligence documents made its way via cutout men and dead-letter drops to the Mail & Guardian a fortnight ago, it had a depressingly familiar quality.

The documents allege political interference in the case against police spy chief Richard Mdluli and epic corruption in KwaZulu-Natal linked to plotting against President Jacob Zuma within the ANC.

In classic counter-intelligence style the dossier combines solid information and fabrication, the product of the fixation on conspiracy that is gripping the governing party and the intelligence sector. We have been here before.

Exactly 10 years ago, on April 23 2001, then safety and security minister Steve Tshwete declared during an SABC television broadcast that intelligence agencies were investigating an apparent plot against President Thabo Mbeki fomented by Tokyo Sexwale, Mathews Phosa and Cyril Ramaphosa. He was backed by national police commissioner Jackie Selebi, who declared that the police had a “duty” to investigate the alleged conspiracy.

The ANC’s 2002 conference in Stellenbosch was then 20 months away, as its 2012 conference at Mangaung is now. No substantive evidence of any plot was ever presented and Tshwete was eventually forced to apologise to the three men. It is a B-movie that has been stuck on repeat, with limited variations in the cast, ever since.

It works like this: take a president anxious to consolidate his position ahead of a vote that will be decided by factional warfare, add an array of state security bodies packed with ANC deployees whose first loyalty is not to the Constitution, or even the party, but to factional barons, then stir in large dollops of cash.

Security
The sequel to Tshwete’s blockbuster was similarly timed: it came in October 2005, two years ahead of the Polokwane conference. The director general of the National Intelligence Agency (NIA), Billy Masetlha, was carpeted by Mbeki over Project Avani, the NIA operation that purported to investigate possible threats to national security arising from the succession battle between Mbeki and Jacob Zuma, still smarting from his June sacking as deputy president.

Businessman and Mbeki-backer Saki Macozoma noticed he was under surveillance and complained. Masetlha was suspended, then fired, sparking a long legal fight, replete with allegations of the misuse of state intelligence resources in party battles.

The infamous “hoax emails”, a compilation of “intercepts” that outlined a plot against Zuma by Mbeki and key supporters such as Macozoma and the former director of public prosecutions, Bulelani Ngcuka, as well as the Democratic Alliance and the media — notably the M&G — were a by-product of Avani.

The emails were clearly faked, but they may have been used to get into the public domain some genuine intelligence product. Either way, their crudeness did not stop Kgalema Motlanthe, then ANC secretary general, from circulating them to members of the party’s national executive committee. They made their way to the press too.

The intended effect was clearly to build sympathy for Zuma, who was seeking to counter the growing corruption case against him with claims of a massive political conspiracy. A third outbreak of war in the secret state had similar consequences.

In July 2007, at the height of pre-Polokwane campaigning, the Special Browse Mole report, compiled at the instance of Scorpions boss Leonard McCarthy, was leaked to pro-Zuma Cosatu and thence to the press.

The report cited intelligence that Angola and Libya were backing Zuma’s presidential ambitions, and warned of threats to national security from Zuma’s supporters in the Umkhonto we Sizwe Military Veterans’ Association. As a sketchy, early, overview of the evidence, the report contained some errors, but senior party and law enforcement officials now concede privately that some of its most important claims were correct.

Discrediting Zuma
The official line following an investigation of the document has always been that it was “written to be leaked”, with the intention of discrediting Zuma. Those familiar with the probe are far from unanimous in supporting that view. Certainly, the effect of the leak was the opposite: it was used to bolster Zuma’s claims of persecution by the Scorpions. The report was also repeatedly cited as evidence in the campaign to close down the unit.

That saga really ended only in March 2009, when the acting head of the National Prosecuting Authority, Mokotedi Mpshe, read out selected portions of phone taps that suggested McCarthy conspired with Bulelani Ngucka and Mbeki himself to manipulate the timing of fraud and corruption charges against Zuma. On that basis, he announced, the case against Zuma would be dropped.

How these recordings made their way to Zuma’s camp is still unclear, but the strongest evidence points to the crime intelligence division of the police, which had apparently monitored McCarthy’s calls as part of “Operation Destroy Lucifer”, its bid to combat the Scorpions’ corruption investigation of Jackie Selebi. It is in this context that the Richard Mdluli dossier can be understood.

At the most basic level Mdluli, who joined the police during the apartheid era and has no real ANC history, is clearly desperate to stave off murder charges dating back to 1999. Judging by his letter to Jacob Zuma, which the M&G revealed last week, he believes the president will sympathise with claims that intelligence resources are being used against him by departmental rivals. He makes a point of reminding Zuma of his assistance during the latter’s “difficulties” with Mbeki.

The accompanying “ground coverage intelligence report” plays into this narrative. It alleges a fresh plot against Zuma, involving the perennial star of such claims, Sexwale, along with Cabinet ministers Paul Mashatile and Fikile Mbalula, KwaZulu-Natal premier Zweli Mkhize and Selebi’s replacement, General Bheki Cele. These allegations are useful to Mdluli because they position his chief adversary, Cele, as an adversary of the president. But they are not entirely imaginary.

It is now a staple of political gossip that Mkhize has drifted away from Zuma and closer to the Sexwale camp, and it is often hinted, without clear evidence, that Cele, too, is of doubtful loyalty. However flimsy aspects of the “ground coverage intelligence report” obtained by Mdluli are, it flushes these claims into the open. It also associates some of those it fingers in the political plot with serious but uncorroborated claims of corruption.

Whatever Mdluli’s motives, it seems clear who this leak ultimately benefits: President Jacob Zuma, like Mbeki in 2001 and 2005, is increasingly beset by internal opposition, most obviously from Cosatu, the ANC Youth League and Sexwale. Despite all the official bluster and denials, his supporters can now again present him as a man under siege by police spies and corrupt political rivals.

It remains to be seen whether ordinary ANC members, and South Africans in general, are now hip to this game. Certainly, they ought to be sick of it.

In his book the Gay Science, Friederich Nietzsche asked: “What if some day or night a demon were to steal after you into your loneliest loneliness and say to you: ‘This life as you now live it and have lived it, you will have to live it once more and innumerable times more, and there will be nothing new in it, but every pain and every joy and every thought and sigh and everything unutterably small or great in your life will have to return to you, all in the same succession and sequence.’ Would you not throw yourself down and gnash your teeth and curse the demon who spoke thus?”

We might answer with a quote from James Joyce: “History is a nightmare from which I am trying to awake.”

The spooks and politicians would prefer that our slumber continue. It is easier to haunt our dreams that way.