In search of a rubber identity 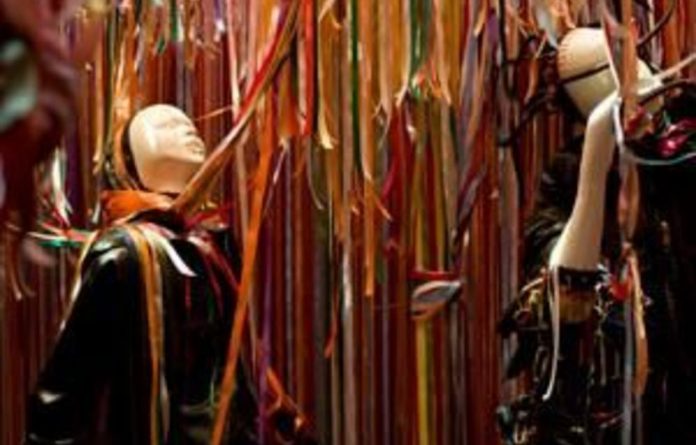 “My cultural identity is an essential part of the work. It is what drives me to dream. I mention it extensively,” Nicholas Hlobo says before the opening of a major exhibition of his art at Norway’s National Museum of Contemporary Art.

“My ambition is to really push myself in a way that will stretch my thinking and create things that are larger than me to see if I can,” says Hlobo, influenced in part by his current mentor, artist Anish Kapoor’s, use of scale.

An example is his maze or labyrinth< em>Ndize, a new work containing two figures clad in rubber hiding in the middle. One has long rubber braids growing from the back of its head. The maze is made of a large mesh frame suspended from above, with a mass of multi-coloured ribbons hanging beneath it. A third figure crouches outside the maze, apparently counting.

This hanging garden is inspired by the idea of hide-and-seek, and Hansel and Gretel. The work refers to “the idea of wandering in an indigenous forest, so the landscaper is god”. He compares the trail of breadcrumbs Hansel and Gretel leave to find their way in the forest to his own issues of identity as a South African and a Xhosa.

“You have to find ways of going back into your memory and remembering if you’ve left some signs along the way. You don’t know who might come and erase the marks you’ve left behind.

“When you think of that idea of hiding and seeking, you think of information, you think of history. In the world in general there’s a lot that is hidden. You think of how history is written. Not all the facts make their way into history books, some of the truth and lies are hidden away from people,” Hlobo says.

Reading between the lines
“At times it can be very dangerous if everybody is to get to know everything. That is how humans operate, you don’t open your chest to everyone. You choose what you want to put across for people to know. And at times you’ve got to read between the lines.”

He gives another example: how people sometimes ask you to hide good news until such and such a time.

“I always find that amazing. Why do we hide good news?” Hlobo asks, pointing out that it is not just bad things people keep secret. He describes his work as “a constant attempt to try and understand human wiring”.

I am blinded by the continual stream of metaphors and the bright pink fluorescent afterglow from the ceiling lights in a space filled with rubber characters. They resemble people in a room, sitting on a sofa, all bathed and subdued in soothing pink. Every bit of material that is used is there to suggest some meaning; a duality of man and materials.

A grotesque rubber stomach embroidered with coloured thread, Umphanda ongazaliyo, also on a large scale, suggests gluttony. The piece takes up two rooms in the gallery, one for the stomach and one for the brightly adorned rubber orifice that feeds it.

New ways of doing things
Another recurrent theme is recycling. “I use the materials, the techniques and the form to try and tell a story.” He gives as an example the use of old rubber inner tubes, which “takes you back to industrialisation, and how rubber got to be used in the automobile industry” and of its relationship with man. “It is so close to masculinity. You go to sex shops and you get sex toys made out of the same materials.”

Hlobo points out how cars don’t use rubber inner tyres anymore, as “ideas evolve, we develop new ways of doing things”. In Xhosa, the name for an inner tube is ithumbu le moto, the intestine of the car, he muses, which comes from the idea of feeding air into the tyre.

Resuscitating discarded rubber contains a further meaning for Hlobo, in relation to South Africa’s past.

“It’s also a play around those ideas that not everything is bad that happened.” This is a radical view, but in keeping with his self-description as someone who came of age in the democratic era. “In the bitter times there were still things that were good, but of course, the negative is dominant.”

Rubber also suggests ideas about safety, he continues. “Ideas around things that are fragile yet protective. It’s not far removed from us living in an Aids age. You can relate it to S&M, to condoms.”

The use of brightly coloured stitches runs through his work, as do zippers, which, he says, are a metaphor for being told to shut up. Zips are used in everyday garments and “can allow a sneak preview of what’s below the surface as well. When the wearer allows you.”

Labour-intensive work
His interest in garments also extends to their importance “in defining class in history and in cultural discourse”. Hlobo is interested in “revisiting some of the things that are long forgotten. It’s labour-intensive work. You stitch, some people think it’s a craft, it’s not important. And also it’s demanding.”

Hlobo compares his craft of cutting and stitching materials together to using paint. Hence the many works framed in rectangles, subverting ideas about the traditional way of painting.

“It’s about making a mark on the surface, the ideas are still the same.” There’s a play on gender and the idea of sewing being seen as a woman’s role, when paradoxically, the most famous fashion designers are men.

His work pushes back the boundaries of what the viewer might expect to find, subverting, but at the same time conforming to these expectations. This contradiction is important to him and comes from history and his own struggle to forge a new ­identity.

Hlobo fears that he is rapidly losing touch with his cultural identity as a gay Xhosa man, and it leads him to give the works Xhosa titles.

Nothing exists in mid-air
He thinks it’s important that some people don’t like his work and confesses that he always wishes he didn’t have to say anything about it. He does see the need to leave signposts — trails to follow.

“Whatever you do, you have to do it for a reason. You need some foundations, nothing exists in mid-air.” After all, when you’re cooking, you can’t just say, “it’s food”.

The exhibition is on at the National Museum of Contemporary Art in Oslo, Norway, until May 29