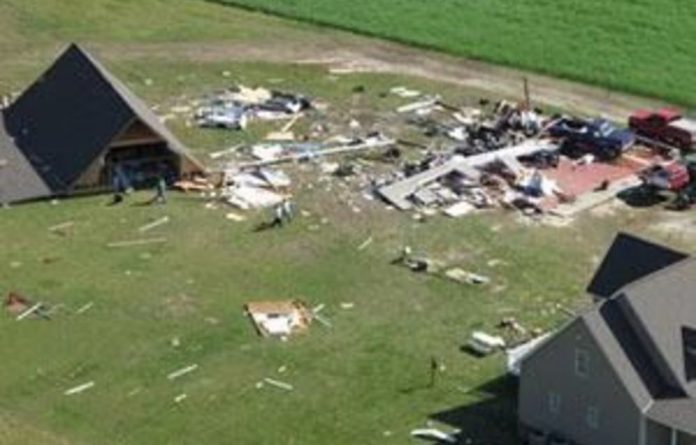 North Carolina accounted for the bulk of casualties and property losses, with 22 people killed and more than 80 others injured in a string of tornadoes that ripped through the state Saturday night.

Houses were flattened, cars and trucks tossed like matchsticks and planes blown off the tarmac at a local airport. Uprooted trees, poles and debris snapped power lines, cutting electricity to more than 200 000 people in North Carolina.

A store manager for home improvement chain Lowe’s in Sanford, North Carolina, was credited for saving customers and staff when she directed them to the back of the store just before a tornado peeled its roof off, news media reported.

“I’ve seen a lot of damage in North Carolina over the years, but this is the most catastrophic I have ever seen. The destruction is massive,” North Carolina Governor Beverly Perdue told CBS News after touring the worst hit areas of the state.

Tornadoes moved through 13 other states, including Virginia, where officials reported four deaths and unconfirmed reports of three more. Virginia emergency officials said that 177 structures were damaged by the severe weather.

Dominion Virginia Power said the two nuclear reactors at its Surry Power Station in south-eastern Virginia shut down automatically on Saturday when an apparent tornado touched down and cut off an electrical feed to the station.

Back-up generators operated normally and both units “are in safe and stable condition”, the utility said in a statement.

Nuclear Regulatory Commission spokesperson Roger Hannah said on Sunday no radiation was released during the storm and shutdown. “Everything worked the way it should,” he said.

AccuWeather.com meteorologist Andy Mussoline said the storms appeared to be the deadliest in the United States since February 2008, when 57 people died in two days from tornadoes in the South and Ohio Valley.

The storms began in Oklahoma on Thursday, moved through the South and hit the East Coast by Saturday. A total of 241 tornadoes were reported and 50 confirmed. The death toll included seven people in Alabama, seven in Arkansas, two in Oklahoma and one in Mississippi.

Homes, belongings scattered
Governors in North Carolina and Virginia declared a state of emergency as authorities scrambled with rescue and cleanup operations.

“We’re used to hurricanes. We’re used to tornadoes. We’re used to floods. But we’re not used to losing 11 of our citizens,” said Bertie county manager Zee Lamb. The sprawling, rural area in north-eastern North Carolina, was the hardest hit.

“The thing about this storm that is different than a typical tornado was the width,” Lamb said. “It wasn’t just 100 or 200 yards wide, but a half-mile wide and it stayed on the ground for six miles or so.”

Progress Energy, the main utility in eastern North Carolina, said 220 000 customers were without electricity at the peak of the storm, with 78 000 homes and utilities still without power on Sunday morning.

The storm snapped hundreds of power poles and 30 transmission structures were damaged, company spokesperson Mike Hughes said. In some areas, tornadoes swept away poles and wires and dropped them elsewhere.

“There are some parts where a tornado took the utility structure away and we cannot find it,” Hughes said.

The storms let up on Sunday, but Mussoline said more tornadoes could threaten the southern plains and Ohio Valley in the coming week, particularly on Tuesday. – Reuters

Ned Barnett
Ned Barnett works from Las Vegas. I've been in politics since I was the local Young Republicans' mascot in the Goldwater campaign, & active ever since. Blogging on conservative issues...
Facebook
Twitter
WhatsApp
Linkedin
ReddIt
Email
Print