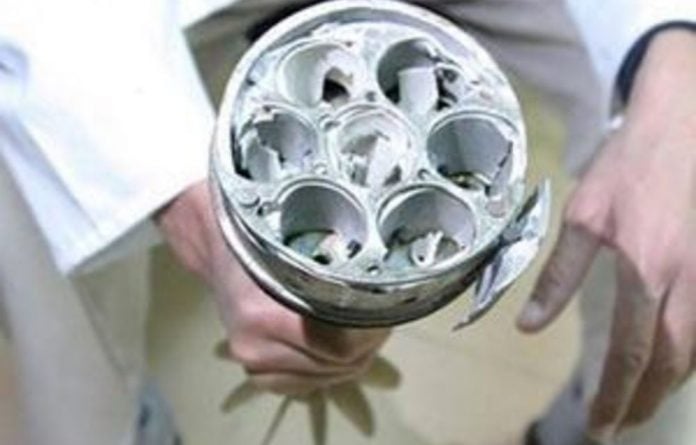 About 1 000 people have been killed and 3 000 injured in Libya’s third city Misrata since Muammar Gaddafi’s forces began attacking it with shells and sniper fire six weeks ago, a senior medic said.

“Some 80% of the deaths are civilians,” said Dr Khaled Abu Falgha, administrator of the city’s main hospital.

Medical staff have seen a sudden rise in the number of people brought into the hospital in the last week suffering gunshot wounds to their heads and necks — the preferred target zone of marksmen.

Another six beds in the intensive care unit are occupied by men brought down by snipers posted around the city by forces loyal to Gaddafi.

Falgha said the 60 beds in his facility were all being used and those with lesser injuries were being sent home after initial treatment.

The last week has also seen worsened injuries from cluster bombs, requiring many amputations, Abu Falgha said. He showed examples of the weapons kept in his office.

Cluster bombs, which spray deadly bomblets indiscriminantly over a large area, are banned by most countries.

Misrata pounded by govt forces
Meanwhile, 17 were killed in the city on Sunday, an NGO worker and an opposition activist said.

Government troops have been laying siege to the city, prompting repeated international warnings of a dire humanitarian situation as well as calls for Nato forces to intensify airstrikes on Gaddafi’s forces there.

On Sunday, government troops, who have pushed into the city centre from the outskirts in recent days, pounded Misrata with mortar rounds and rocket-propelled grenades, said resident Abdel-Salam, who only provided his given name for fear of retribution.

“Residents have become so accustomed to the sound of mortars and missiles,” he said. “Snipers are still on the roofs of tall buildings shooting at anything that moves in the city centre.”

Rebels fought government forces back from an area around a central produce market, regaining a small sliver of territory, said Rida al-Montasser, a local activist reached by Skype.

He said a hospital report that he received from a doctor, showed 17 people, including rebels, were killed and 74 others were injured. He said Gaddafi forces had fired at the city’s hospital on Sunday.

A worker for a foreign NGO who visited the hospital on Sunday also said 17 bodies were brought in, including that of a girl shot in the head. Other children who had been shot were among the wounded, he said, speaking on condition of anonymity because he feared for his safety.

The Nato-led air campaign authorised by the UN to protect civilians and enforce a no-fly zone has failed to stop government shelling that, according to residents and witnesses, has hit Misrata’s hospital, the port and residential areas.

The international airstrikes have kept rebels from being defeated on the battlefield by the better trained and equipped government forces, but it still has not been enough to turn the tide in the war. In the eastern half of Libya, rebels in control of most of that part of the country since the uprising began on February 15 have been unable to advance westward toward the capital.

In Paris, French Defence Minister Gerard Longuet dismissed statements from a top Nato official that the alliance is short of aircraft. Longuet said instead that Nato’s mission in Libya is hampered by a lack of ground information.

Lack of information
“There is no lack of planes but a lack of identification of mobile objectives,” he said in an interview published on Sunday in the daily Le Parisien. “The problem is that we’re missing concrete and verifiable information on identified objectives on the ground.”

Longuet said that “coalition aviation is capable of breaking all logistical provisions of Gaddafi’s troops” to the east. But he acknowledged that in urban combat, “if the aviation avoids tragedies, it still isn’t solving the problem.”

“I’m hopeful that nations will step up to the plate,” he said, noting that the two-day Berlin meeting was not held to solicit new pledges of support.

The need for the additional aircraft comes as the situation has changed on the ground, Fogh Rasmussen said.

In eastern Libya on Sunday, government forces shelled the eastern edge of Ajdabiya, the front-line rebel town that has been the scene of fierce fighting in recent weeks.

Loud booms rocked the city throughout the morning, sending a column of cars — some with rebel fighters, others with families — fleeing north through a thick sandstorm to more securely held rebel territory.

The Libyan government has come under sharp international criticism for its assault on Misrata and has been accused by human rights groups of using heavy weapons, including shells, missiles and cluster bombs.

Major-General Saleh Ibrahim denied Libyan forces have used cluster bombs, saying the army did not have such weapons and that Libyan soldiers had not been trained in their use.

On Sunday, spokesperson Ibrahim said Nato is taking sides in the conflict and renewed claims that fighters from the al-Qaeda terror network have joined the rebels.

“Nato is supporting the rebels, allowing them to advance against our army, providing them with air cover,” he said. “It knows about the arming of rebels by the Qatari government and is allowing that. Nato knows about al-Qaeda activities in Benghazi, Darna and Beyda. It knows that al-Qaeda fighters are advancing westbound.” – Sapa-AP, AFP