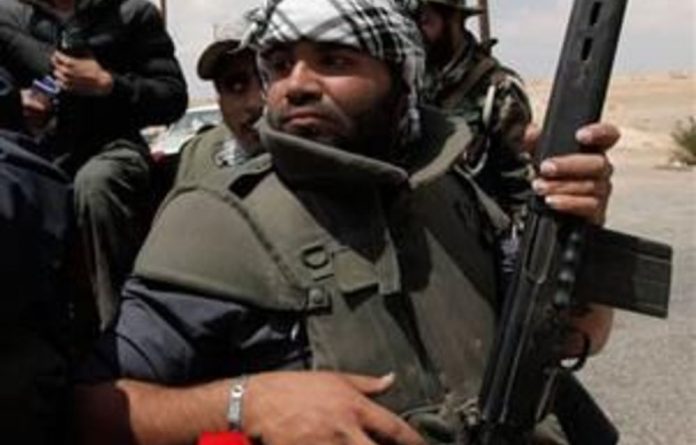 A rebel official in Libya’s besieged city of Misrata pleaded for Britain and France to send troops to help fight Muammar Gaddafi’s forces, while a son of the strongman said he was “very optimistic” his father’s regime will prevail.

A senior member of Misrata’s governing council, Nuri Abdullah Abdullati, said they were asking for the troops on the basis of “humanitarian” principles, in the first request by insurgents for boots on the ground.

Previously, he told reporters, “we did not accept any foreign soldiers in our country, but now, as we face these crimes of Gaddafi, we are asking on the basis of humanitarian and Islamic principles for someone to come and stop the killing.”

“Before we were asking for no foreign interference, but that was before Gaddafi used Grad rockets and planes. Now it’s a life-or-death situation.”

His plea came as Gaddafi and rebel forces engaged in fierce fighting in south-east Misrata.

The din subsided only briefly when Nato planes were heard overhead, but picked up immediately afterwards.

The rebels in Misrata, which has been under siege for more than a month and seen hundreds killed, have no direct contact with coalition forces. Abdullati said the request was sent last week to the rebel Transitional National Council (TNC) in Benghazi, but there had yet been no reply.

‘Optimistic’
Separately, Seif al-Islam, a son of Gaddafi, said he was confident the rebellion would fail.

“I am very optimistic and we will win,” Seif said on Allibya television.

“The situation changes every day in our favour,” he said before a group of about 50 attending the television broadcast. He did not give details.

Seif vowed that his father’s regime would “not seek revenge” against the rebels fighting to oust him.

But he warned that “the use of weapons and force will only be met by force and those who cross the four red lines, set in 2007 [Gaddafi, Islam, state security and national unity] will have to bear the consequences”.

British Foreign Secretary William Hague said London would send 12 military advisers to rebel-held eastern Libya, but that they would not be involved in training or arming the rebels, or help in planning operations.

“They’re not boots on the ground, this is not British ground combat forces going in … There is going to be no ground invasion of Libya,” Hague told BBC television.

Libyan Foreign Minister Abdelati Laabidi told the BBC such a move would harm chances of peace in the country and “prolong” fighting.

“We think any military presence is a step backwards and we are sure that if this bombing stopped and there is a real ceasefire we could have a dialogue among all Libyans about what they want — democracy, political reform, constitution, election. This could not be done with what is going on now,” Laabidi said.

French Foreign Minister Alain Juppe said he was “entirely hostile” to sending troops into Libya, even special forces to guide in air strikes.

Political solution
But Prime Minister Francois Fillon said France will “intensify our military effort from our air force to prevent Gaddafi forces from pursuing their attacks on civilian populations”.

“But at the same time, we will need to find a political solution — that is, conditions for a dialogue so that the Libyan crisis can be resolved,” he said in Kiev.

Frattini, speaking in Rome after talks with rebel leader Mustafa Abdel Jalil, also said Italy will host talks next month on allowing oil exports from eastern Libya and could provide rebels with night-vision kit and radars.

France and Britain, which launched the first air strikes on March 19, have struggled to convince allies to intensify the air war while Nato commanders are scrambling to obtain even a few more ground-attack jets.

Meanwhile, the world community scrambled to provide humanitarian aid to Libya and to evacuate those fleeing the fighting, mostly foreign workers.

With thousands clamouring to escape Misrata, Britain said it would charter ships to pick up 5 000 migrant workers after a ferry rescued nearly 1 000 on Monday. — AFP

People power can break a dictatorship – but what comes next?
Read more
Advertising