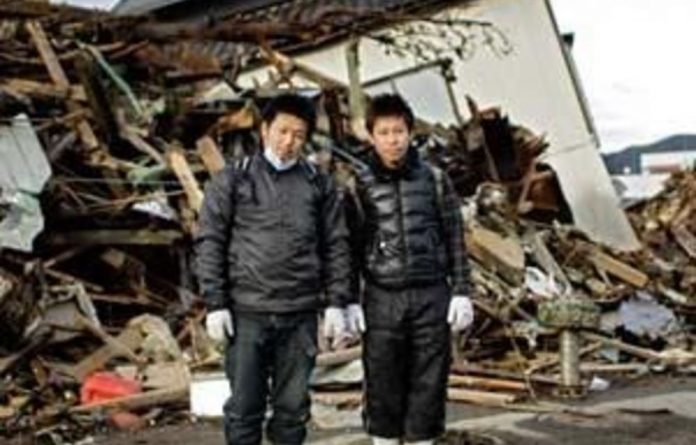 The wind that blows across the debris-strewn land surrounding Atsuko Sakurai’s house is unusually strong for this time of year, she says, shielding herself from sharp gusts of flying dirt.

That may be because buildings that once helped diffuse sea breezes are no longer there, wiped out by the devastating March 11 quake and tsunami that left nearly 6 000 dead or missing in the small fishing town of Ishinomaki alone.

“It will take 10, maybe 20 years before things return to normal here,” said Sakurai on the eve of her 48th birthday. “But we want to make it happen. We want to live here happily again.”

Nearly six weeks on, many of those who survived and whose homes stood up to the raging torrents are now trying to clear them of debris and putrid mud to search for the remnants of their old lives.

The strong gusts of wind send people ducking for shelter and animate sheets of corrugated iron that bow, scrape and dance across mangled piles of brick, wood, metal frames and cars contorted between gravestones.

The houses left standing are filled with the detritus of the raging sea, and residents of towns such as Ishinomaki on the tsunami-battered northeast coast need manpower to help them clean out their ruined homes.

Increasing numbers of volunteers from around the country are working with community leaders in the process, and supplies are making their way in, with roads from Tokyo packed with trucks full of food, water and materials.

Japanese and foreign expatriates have been welcomed at weekends to help clear houses, fill sandbags to patch up broken roofs and unload food and sanitary supplies for distribution.

‘Help was needed’
Joji Hiratsuka is a Tokyo-based trader at an investment bank who has travelled north every weekend for the past month and has helped coordinate teams of friends and acquaintances to join in the effort.

“Our hockey team decided to send up a truck load of supplies. I put my hand up to drive the truck,” he said.

“After seeing what was going on up north it was clear help was needed. But talking to people who lost their belongings, homes, and even some loved ones, I have not sensed any defeatism.”

Ishinomaki Minato elementary school is now a home for those who lost theirs and a base where supplies are unloaded. A clock outside stopped at 3:50pm, after the tsunami from the 9.0-magnitude quake hit.

In the town in Miyagi prefecture residents and volunteers shovel black mud, tar, dead fish and other rotting matter from houses in search of precious items such as urns holding the ashes of loved ones.

Katsuhiro Suzuki saw his barbershop and the family home of 89 years devastated, but all his loved ones fortunately escaped to safety. His old piano lies upturned on the floor of what used to be the living room.

“After the earthquake I couldn’t turn on the TV, so I found some batteries for my radio in time to hear that a 10-metre tsunami was going to hit us,” he said of the March afternoon now seared into Japan’s collective memory.

“My two grandchildren and their grandmother didn’t want to go, they thought it would only be a small wave, but I shouted at them to leave,” he said.

They made it to the elementary school nearby before the first surge came, which saved their lives.

“It wasn’t a wave. It sounded like a machine that was tearing up houses,” a red-eyed Suzuki said.

At least three more tidal surges came that night, every three or four hours after the first.

Suzuki rode them out on the second floor of his house. He saw people clinging onto floating rooftops as they swept past him, while 180 survivors waited on a nearby footbridge until the waters receded.

Suzuki and his wife needed help to bring the broken furniture out of the house and onto the recently cleared street so they could find their belongings before the building was bulldozed.

Amid the mess, a bag containing Suzuki’s father’s pristine Kendo warrior outfit was found. Typical of the defiance characterising his nation’s response to the disaster, he donned the armour to give a demonstration in the rubble.

“This event was beyond our control, we have to accept this. All we can do now is get on with our lives,” he said, waving his Kendo stick towards the now calm sea. — AFP