Malema out of tune in court 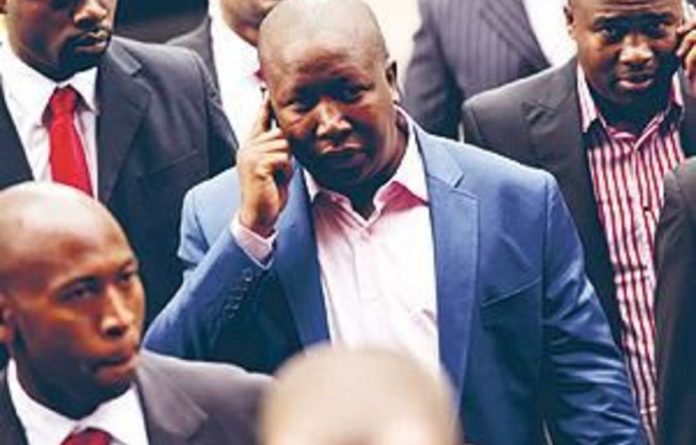 Perhaps he felt a bit uncomfortable in his starched white shirt and grey suit. Perhaps he felt overawed, although this seems unlikely. Either way, ANC Youth League leader Julius Malema didn’t do a great job on Wednesday of singing the chant for which he faces court action.

Malema was giving evidence in the Equality Court trial in which Afriforum and TAU SA — formerly the Transvaal Agricultural Union — have accused him of hate speech for singing the struggle song, dubul’ ibhunu (shoot the boer).

For a song to constitute hate speech, it has to be shown that it has incited violence. This week the South Gauteng High Court in Johannesburg was at its most colourful since the murder trial of Glenn Agliotti earlier this year, with at least 200 placard-bearing, chanting supporters stationed outside on Wednesday and a large screen broadcasting pro-ANC propaganda.

In the courtroom the young men of the ANCYL looked sharp, sporting tailored suits, with iPads on their laps. Youth league spokesperson Floyd Shivambu sat at times with his red-nailed, braided-haired girlfriend at his side, affectionately hugging her from time to time.

In his solo rendering of the song at issue Malema showed the court that he cannot hold a note and he broke into song tunelessly on three further occasions during his evidence.

“Sometimes the comrades, we sing these songs,” he said. “If people had to see what we do when we are alone, they would be scared. We crawl around and pretend that we have machine guns.”

Malema said he was trained to use a firearm when he was 11 years old. “We sang these songs not saying ‘shoot farmers’, but saying that you must shoot the police and the soldiers who were coming to parents’ houses in the middle of the night, asking them for their IDs and asking where are their children.”

Afriforum’s complaint “isolates an individual amongst many people who are singing the song — it’s not Julius’s song”. Then Malema added, with more accuracy than he perhaps realised: “I’m not Brenda Fassie.” The atmosphere in court was hostile throughout the week.

When Afriforum’s advocate, Martin Brassey, told Malema that he didn’t share the view of the media that Malema was “unintelligent and a buffoon”, Malema interrupted: “You do share it, that’s why you said it. You are doing this for the papers. You are playing to the gallery.”

Tension crackled in the courtroom every time TAU’s advocate, Roelof du Plessis, stood up. Du Plessis was clearly unpopular with the gallery, which laughed derisively at his questions. Becoming riled easily, literally huffing and puffing with frustration, he was told on several occasions by Judge Colin Lamont to control his emotions.

In his cross-examination of Collins Chabane, the minister in the presidency responsible for performance monitoring and evaluation, Du Plessis had to ask Lamont to keep the gallery quiet. “My Lord, this is not a circus, this is not a show,” he said. When Du Plessis missed his chair as he sat and fell to the ground on Tuesday, robes flailing, he found

little sympathy among the onlookers. Pointing at Malema’s legal team, he accused it of using body language to influence Chabane’s answers. This week ANC secretary general Gwede Mantashe claimed in the witness box that critics of Malema’s singing of dubul’ ibhunu suffered from “Malemaphobia”.

Mantashe said that the ANC had tried on several occasions to engage Afriforum and TAU in dialogue about the song, but they had stonewalled the overtures. Brassey responded that he was not aware of the offer.

On Wednesday Malema asked for a chance to make a political speech after his cross-examination. Du Plessis objected. “My Lord,” said Malema. “This is a political matter before you. My answers will have to be political.”

Malema talked about his experience of visiting Orania, the Afrikaner separatist town in the Northern Cape, earlier this year. “I ate koeksisters,” he said. “They said that is their food. We shared a cup of coffee. It was very nice — I didn’t sing in Orania, because singing struggle songs, you don’t just sing anywhere. You must have a sense of occasion. Singing is nicer when you sing to people who can follow the song and you have back-up.”

He told the court that since he became youth league leader white people have often approached him for his autograph. “There has never been a white person who has walked towards me and hurled an insult at me,” he said. “They ask for a picture with me.

“Sometimes they ask me in the clubs why I say ‘kill for Zuma’. I explain to them that I don’t mean it literally and they leave happy.” The trial was due to end on Thursday.