The mosque next door 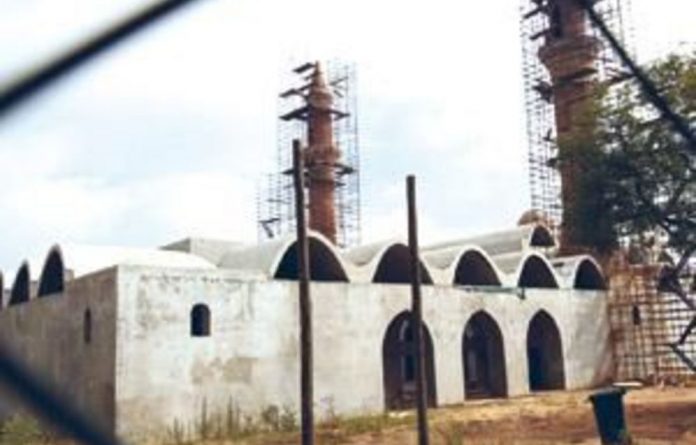 For the past few years an impressive but unfinished mosque has languished at the side of the highway in Houghton. The minarets are tall and beautiful but the scaffolding surrounding the building seems to get rustier as the days pass.

The tree-lined streets surrounding the mosque have always been avenues of privilege. The large houses, with their shaded verandahs and pristine gardens, are the ultimate symbols of what it means to be successful and rich in this city. Over the years the majority of the wealthy white residents in the area were Jews. But, like the rest of the country, Houghton is changing. Affluence, no longer defined by race, has seen a trickle of black residents and a surge of Muslims into the area. The large, half-finished mosque is emblematic of the transforming suburb.

Emraan Dasoo of the Houghton Muslim Jamaat Trust says the mosque was mooted about 15 years ago.

“People started moving into the north from 1990 onwards,” he says. “A delegation from Saudi had met Madiba and they wanted to leave a legacy to this country, so they bought West Street.” He smiles at me across the boardroom table of his legal firm in Melrose Arch. “There was quite a lot of red tape but in September of 2008 things started with gusto, then there was a contractual dispute and things were left standing. Since then we’ve taken control of the site. We hope to have a new contractor in early May.”

The towering West Street mosque sits right next door to a small shul which is the spiritual home to many influential Jews and was founded in a private house in 1976. Against a global backdrop of strong tensions between Jews and Muslims in the Middle East and elsewhere in the world, the two seem unlikely neighbours. But that is not the way Rabbi Craig Kaycev and the vice-chairman of the West Street shul, Laurence Rapp, who is also on the committee of the Houghton Community Active Protection (CAP) initiative, see it.

“At a rough estimate looking at our membership, some 20% of Houghton residents are Jewish today,” Rapp says.

“There’s been a slow trickle of Jews emigrating over the last few years,” Kaycev says. “We’ve seen people leaving, but at King David School the numbers are not down. The community today is more powerful than it’s ever been.”

‘Zionist shul’
And this is particularly so of the West Street shul which, Rapp points out, is “a very Zionist shul — many of the original founders are now living in Israel”. Rapp’s father-in-law used to own the gabled single-story house that is now the shul. “He was born in the house and had his bar mitzvah here, so it’s a very special place for me and my family,” he says.

The house itself is modest, unlike some of the much larger mansions surrounding it, but once the property was much larger. “It was very peaceful here until they built the motorway [in the late 1960s]; the garden used to go all the way to the golf course.”

The shul today stands on a much smaller strip of ground and, like most houses in the city, it is fronted by an ugly fence. The simple, unostentatious exterior is deliberate, keeping a low profile for security reasons. But, inside, the spiritual life of those who worship there is thriving.

“There is no formal interaction between us and the mosque,” says Kaycev. “But there’s never been conflict either. When they started building [the mosque] on the property next door we discussed it as a community. The view was that people are praying there. It poses no risk to us.”

But when issues such the conflict between Israelis and Palestinians come up, what happens then?

Rapp pauses for a moment. “People have views, of course. I have strong views on certain issues. But we have not politicised our area. We respect our neighbours. When the United States consulate was here there were often demonstrations against the US and Israel, but they were not directed at us as local Jews. We just walked on the other side of the street.

“Everyone has a political view but when you live in an area or a country you want the best for that area or country. We’ve never experienced that, as a Jewish community, our religiosity has been restricted.”

Rapp agrees. “In this country we have the freedom to walk around wearing, say, our yarmulkes. I’ve been on many business trips to places like Russia where it’s not safe to do that.”

This cooperation is partly a consequence of privilege. No one I spoke to disagrees with this.

CAP initiative
The main issue that the two communities have come together over very successfully is the CAP initiative which has significantly reduced crime in Houghton. Jewish and Muslim communities here are not competing for scarce resources, or over land, but there is something deeper and more important than merely seeing largely well-off people agreeing to live together and to fight crime in their neighbourhood. Rapp points out that Hindu and Christian members of the community have also played an important role in this initiative.

There is a conscious and active sense of believing in, and of deeply valuing, a South African identity.

“My Muslim identity plays a strong role in my life,” Dasoo says. “But I consider myself South African, then a Muslim, then someone of Indian origin. I think there’s a real understanding that we have to meet the challenges of South Africa and not get sidetracked by religious and cultural conflicts. There may be undercurrents, individuals who feel certain ways, but they don’t manifest themselves in the community. There may be some radicals out there, but you get that in every society.”

Avrom Krengel, the chairperson of the South African Zionist Federation, agrees. “We’ve been very conscious of not importing a conflict thousands of miles away into South Africa. We support Israel, but in a positive way we would never, say, demonstrate outside a mosque. We believe that both communities should be able to show their support without clashing in South Africa. South Africa has enough troubles of its own.

“Don’t underestimate the financial connections between Muslim and Jewish business people. Both communities are successful; both want to help uplift South Africa.”

To an outsider this might sound a little too good to be true, but there is something uniquely South African in it. Despite its turbulent and bloody history, South Africa has no meaningful legacy of religious conflict, though an arguable exception to this might be the massacre of about 200 followers of Enoch Mgijima at Bulhoek in the Eastern Cape in 1921.

Even under apartheid some priests, imams and rabbis were detained or even imprisoned for political acts or statements that the state regarded as dangerous, or revolutionary, but they were never persecuted for their spiritual beliefs, for what Kaycev calls their “religiosity”. There was a bitter, but significant, irony in leaving the mosques and churches standing in places like District Six when the houses were razed and the people living there forcibly removed for the supposed crime of living in an area the government had zoned for white people.

In the past two decades fear of change has been a dominant emotion for many – mostly white – privileged South Africans. There is something to celebrate then, in the story of these two buildings on West Street, in the post-apartheid story of a mosque and a shul co-existing, and thriving, on the same street in Houghton. Along the shaded avenues, a new sense of identity, of what it means to be South African, is growing, changing not only the buildings but the way people see one another and the stories they tell of one another.

“At the beginning we had no children here,” Rapp tells me of the shul. “But this year we had four bar mitzvahs and 12 bat mitzvahs. In the past 10 years we’ve had 40 to 50 children. It is the regeneration of a community.”

Dasoo says: “We made it clear to the Saudis from the beginning that our mosque would be run on South African principles. Because we are South Africans we’ve learned from the mistakes of the past. Because of the strict separation we had certain notions about one another, but now we know one another and we see things differently. I think it’s exciting that we live in a community that is so vibrant and diverse.”

Hamilton Wende is the author of House of War, published by Penguin. He based in Johannesburg