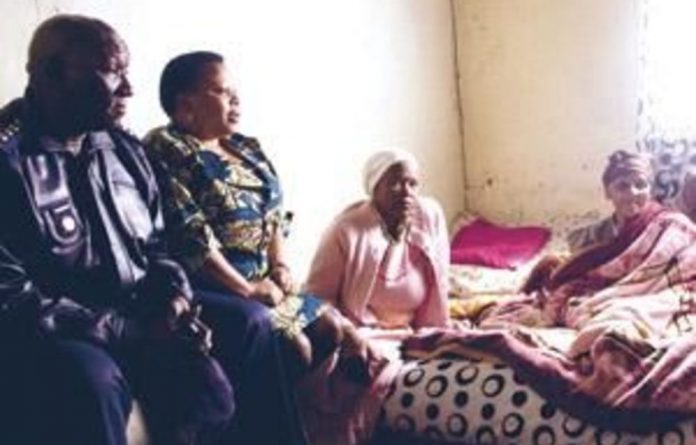 Phillip Selokoe, his former high school teacher, showed the Mail & Guardian an oval mark not far from the municipal building entrance where Tatane was apparently shot in the chest. Then he pointed out a smaller, spherical one about 10 metres further on where Tatane is said to have collapsed some minutes afterwards.

“I taught him English,” the heavy-set, bespectacled Selokoe said. “He was a very brilliant student, a pioneer by nature. He was very skilled in initiating things that would benefit others.

“He wanted to see all the ­people freed from unemployment and illiteracy.”

‘The last one to die’

Following the death of Andries Tatane after police allegedly beat and shot him, Police Commisioner Bheki Cele visited him family home in Ficksburg to offer his condolences.

The chalk markings, will soon disappear but it seems that Tatane has been marked to become a martyr. In the wake of his death, comrades far and wide have hailed him as a new breed of freedom fighter — one who side-stepped party affiliations, rolled up his sleeves and made a difference to the lives of those around him. He was “a beautiful fighter”, whose “death shall not be in vain”, says a Facebook group set up in his honour, one of several created since his death.

Activist Andile Mngxitama, of the September National Imbizo that started the group, said Tatane was a “symbol of the new resistance”, who died because the government failed to deliver.

“It’s deceitful to blame his death on rogue policing,” Mngxitama said. “The militarisation of the police happens only to crush dissent. The police are carrying out a political mandate, so for us his death was not an accident.” Mngxitama said Tatane was born on February 22 1978 — so he died at the age of 33, just as Jesus did.

According to family members, the month of April always haunted Tatane. Two days before his own death his widow Malehlohonolo recalled, he was reliving the death of his mother about five years ago. He also lost his brother and father in the month of Easter.

But as many in Ficksburg’s Meqheleng township will tell you, it is better to remember Tatane by the way he lived his life rather than how he lost it. At the Tatane household — two modest brick buildings on a medium-size township stand — a scene of mourning of national importance unfolded on Tuesday as the family prepared for Saturday’s funeral.

Visit overshadowed by Cele
Outside the two-room building where Tatane lived with his wife and youngest son, Molefi, Archbishop Thabo Makhoba, accompanied by an entourage of South African Council of Churches clergymen, addressed the few present, expressed his condolences and encouraged the public to vote in the coming municipal elections.

If the men of the cloth were hoping for a press conference their visit was overshadowed by the media circus caused earlier by the arrival of police commissioner Bheki Cele.

Between the homestead’s buildings men minded a fire where two sheep were being cooked. Family members hurried about, serving an ever-present throng of mourners.

Molefi Nonyane, who can be seen holding the collapsed Tatane in some clips of the now infamous April 13 incident, said he met the deceased man in 2008 when he joined the Congress of the People.

“Tatane was already a member. He was very committed and his input in meetings was always vital, but he would never take up a position in the party. He believed in leading from within,” Nonyane said.

Although Nonyane rejoined the ANC some months later the pair remained close because they had much in common. “We were part of the lost generation,” said Nonyane, who was seated on the back of an open bakkie in the yard.

“We slipped through the fingers of academia, dabbled in business and did whatever to survive. As such we were like voices from behind the mountain,” he said. Ficksburg’s Imperani mountain loomed over the gathering.

Tatane’s self-funded community newspaper, Your Voice, was “a hit” in the township because it covered everything from street fashion to service delivery issues, Nonyane said. But the paper collapsed after Tatane ran out of money to sustain it.

“Wherever we were, we made a lot of impact,” Nonyane said. “Nobody really understood the vastness of his potential. He was the type of person that if you lost him in your group the group would crumble.”

Perhaps Nonyane is correct — the burning of two municipal buildings, including the library where Tatane conducted maths and science classes for the community, could signal a dip in the underdeveloped Meqheleng’s morale.

‘Ungovernable town’
On Facebook, a Ficksburg organiser calls for the town to be “rendered ungovernable”, suggesting that more upheavals could follow.

By several accounts the Meqheleng Concerned Citizens (MCC) group, formed after a march to the local municipal headquarters last month, is a volunteer-based group with no party affiliations.

The main gripe in the township is that some parts have been without water for three years. A construction failure in zone eight, a new development, has meant that sewage regularly spills out into the streets.

Nonyane said that at meetings of the MCC the teacher in Tatane would often come to the fore and he would ask the speaker leading questions to make sure no one got lost in a maze of political jargon.

A dropout from both the University of Cape Town, where he pursued media studies, and Wits (psychology), Tatane had no formal training as a teacher. He launched a multifaceted project, the I Can Learn Academy, which showed his jack-of-all-trades flair. Besides extramural classes it offered cleaning services, a car wash and a catering operation. Malehlohonolo Tatane said he was always pursuing community-based business opportunities.

He died before his four-year-old son could pronounce “Petros” — his nickname from his courting days. Molefi voiced this as “Os”. As you descend from muddy Meqheleng to Fickburg’s sandstone CBD you can still sense the shock caused by Tatane’s death.

People of all races appear to be united in their dissatisfaction over service delivery. The roads are in a perpetual state of disrepair, they say, and the water supply has been unreliable.

The glass door to the municipal building has been damaged by rocks allegedly thrown during the protests that took Tatane’s life. If nothing else, that damage is a reminder that the MCC’s mandate is now written in blood.

Humble Cele comes cap in hand and apologises
Far from the blustering MC of the Deadly Force roadshow, the police commissioner who visited the late Andries Tatane’s home on Tuesday appeared sunken like a hunchback, with his cap between his knees.

As soon as Bheki Cele walked into the house where Tatane lived journalists jostled for space in the cramped bedroom where Tatane’s mother-in-law, Maria Mohlaping, his sister, Seipati Tatane, his aunt, Motshidisi Baajties, and uncle, Boy Tatane, were seated.

Tatane’s widow, Malehlohonolo, joined them later after returning from Bethlehem, where her husband’s body had been taken for a postmortem. Accompanied by Deputy Police Minister Makhotso Sotyu, who eased the language barrier, Cele admitted to being apprehensive about coming because he didn’t know how the family would receive him.

He apologised for his delay in commenting on Tatane’s death and said that he had been out of the country on the day of the incident. He had returned late last Friday, when he had issued a statement.

Cele offered his condolences and apologised for the Tatane’s death, describing the incident as “ugly, bad and painful”. He said he was pleased the Independent Complaints Directorate investigation had been speedy and was confident that the law would take its course.

He hoped Tatane’s death would be the last at the hands of his force — but to achieve that communities and the police had to build healthy relationships because it was tension that created volatile situations, he said.

The public eating of humble pie seemed to work. Tatane’s cousin said the family “bore no grudges against the police and they should not be afraid to carry out their duties as policemen”. Malehlohonolo Tatane said she felt the apology was “sincere”, although she later admitted that she would never trust a police officer again. Her older sister, Pinkie Mohlaping, a police officer in Ladybrand, said that being in the SAPS at this time was rather embarrassing.

As Cele and his entourage were about to leave, he was cornered by a group of journalists. He denied ever making a “shoot to kill” comment and challenged journalists to produce the clip that recorded him saying that.

Asked to comment on the state of police training in the country he said there were about 192 000 police officers, making it a large family where “some kids are bound to step out of line”. Efforts to improve training were continuing, he said.

Godongwana ‘anxious to clear his name’ in sexual assualt allegation...

The police have reportedly handed over a docket to the National Prosecuting Authority, which will decide whether the finance minister is charged with sexual assault
Business

Ten years later, still no memorial park at site of...

Sibanye-Stillwater, which inherited the project after purchasing Lonmin, now looks to finish the project by next year.
National