‘Misrata is free, the rebels have won’ 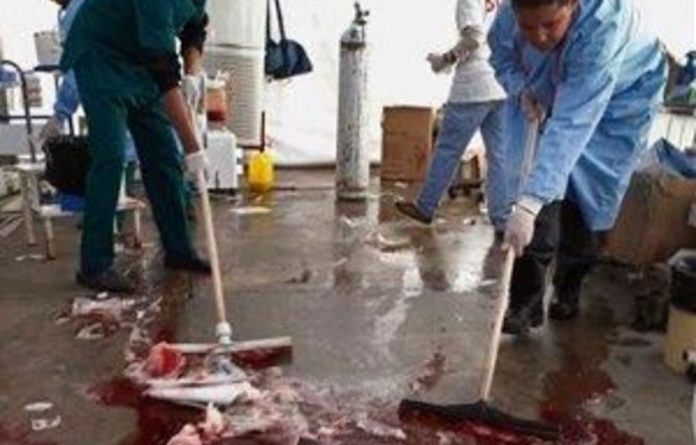 Rebels in Misrata claimed victory as Libyan government troops retreated from front lines, in what appeared to be a significant setback for Muammar Gaddafi’s forces hastened by Nato air strikes.

Misrata, the last large city held by rebels in western Libya, had been under a punishing government siege for nearly two months and hundreds of civilians have died in the fighting.

“We have been told to withdraw. We were told to withdraw yesterday [Friday],” a government soldier captured by rebels, Khaled Dorman, told Reuters on Saturday from the back of a pick-up truck.

He was among 12 wounded soldiers brought by rebels to hospital in Misrata, 200km east of Tripoli. Blasts and machinegun fire could be heard in the distance.

Another serviceman, asked by a Reuters correspondent if the government had lost control of Misrata, said “yes”.

Rebel spokesperson Gemal Salem later told Reuters by telephone from Misrata that Gaddafi’s forces had left the city but remained outside and would still be in a position to bombard it.

“Misrata is free, the rebels have won. Of Gaddafi’s forces, some are killed and others are running away,” he said.

But the overall trend of fighting in Libya was far from clear. Al-Jazeera television reported that heavy fighting continued around a hospital in western Misrata being used as a base by Gaddafi’s forces.

And government forces captured the town of Yafran in Libya’s Western Mountains on Saturday, a rebel spokesperson said.

The conflict in the Western Mountains has received little international attention. Rebels there captured a border post two days ago and had begun been rushing supplies to towns under attack, saying they were cheered by reports from Misrata.

Drone hits rocket launcher
The Libyan government said late on Friday that Nato air strikes had taken their toll on its forces.

“The situation in Misrata will be eased, will be dealt with by the tribes around Misrata and the rest of Misrata’s people and not by the Libyan army,” he told reporters in Tripoli.

Washington launched its first Predator drone strike on Saturday, the US Defence Department said. Nato later said the target had been a multiple rocket launcher which had been used against civilians in Misrata.

A British military spokesperson said British warplanes had destroyed government armoured vehicles near Misrata and in other areas of Libya in recent days.

A rebel spokesperson in Misrata, Abdelsalam, said pro-Gaddafi tribes were in a minority in the area:

“There are two small pro-Gaddafi settlements outside Misrata. They make up less than 1% of the population of Misrata and the surrounding area.”

“Those people know that when Gaddafi’s regime falls, they will fall with it,” he added, predicting the government would boost their strength by paying mercenaries to pose as tribesmen.

“One man was opening his fridge when he went to his house after the Gaddafi forces left it this morning and it blew up in his face. Bodies the same. When the rebels are trying to lift a body it blows up,” he said.

A rebel spokesperson told Al-Jazeera at least 15 people had been killed by booby-traps and ambushes and 31 wounded.

Libyan Foreign Minister Abdelati Obeidi was reported by Tunisian news agency TAP to be in Tunisia on Saturday evening.

Analysts said the use of drones would be a psychological boost for the rebels but would not tip the balance in a conflict which the top US military officer said on Friday was nearing a stalemate.

Nato bombs struck what appeared to be a bunker near Gaddafi’s Bab al-Aziziyah compound in central Tripoli.

Government spokesperson Mussa Ibrahim said three people had been killed by the “very powerful explosion” in a car park.

Reuters journalists said the area was surrounded by a wall and guarded by watchtowers and soldiers. They saw two large holes where the bombs had torn through soil and reinforced concrete, to pierce what appeared to be an underground bunker.

Smoke was rising from one of the craters and ammunition crates lay nearby. Ibrahim said the area was disused and the ammunition boxes were empty.

Nato said it had conducted 59 strike sorties on Friday and hit two command and control bunkers in the capital as well as three tanks, one bunker and other targets near Misrata.

British charity Save The Children said children as young as eight being cared for in refugee camps had reported being sexually assaulted by fighters during the conflict. The charity could not say which side they came from.

Rebels’ elation at the breaking of the siege of Misrata was tempered by distrust of Tripoli. “I don’t believe Gaddafi at all,” said Osama al-Misrati (41) as he took his wife and children by ferry from Misrata to the safety of Benghazi.

“If he really does withdraw it’s for a tactical reason only. We have to win this.” – Reuters

The bid to impeach the president failed, Iowa was a disaster and Adam Schiff is a PR nightmare
Read more
Advertisting
Continue to the category
National