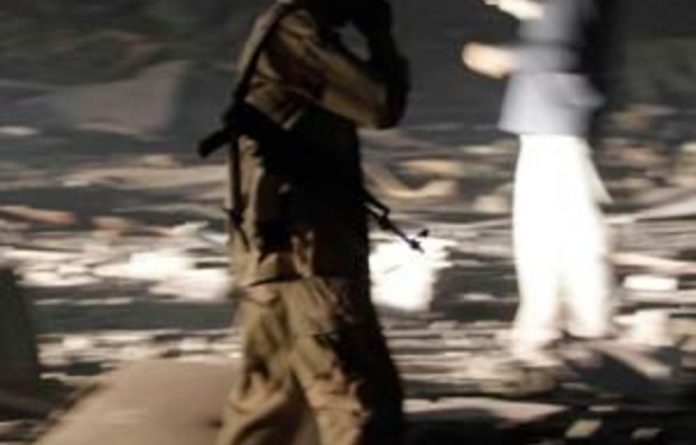 Nato forces flattened a building inside Muammar Gaddafi’s Bab al-Aziziyah compound early on Monday, in what a press official from Gaddafi’s government said was an attempt on the Libyan leader’s life.

Firefighters were still working to extinguish flames in a part of the ruined building a few hours after the attack, when foreign journalists were brought to the scene in Tripoli.

The press official, who asked not to be identified, said 45 people were hurt in the strike, 15 of them seriously, and some were still missing. That could not be independently confirmed.

Gaddafi’s compound has been struck before, but Nato forces appear to be stepping up the pace of strikes in Tripoli in recent days. A target nearby, which the government called a car park but which appeared to cover a bunker, was hit two days ago.

The United States, Britain and France say they will not stop their air campaign over Libya until Gaddafi leaves power.

Washington has taken a backseat role in the air war since turning over command to Nato at the end of March but is under pressure to do more. This week it sent Predator drone air craft, which fired for the first time on Saturday.

Government troops bombarded the western rebel bastion of Misrata again on Sunday, a day after announcing their withdrawal following a two month siege. A government spokesperson said the army was still carrying out its plan to withdraw from the city, but had fired back when retreating troops were attacked.

“As our army was withdrawing from Misrata it came under attack by the rebels. The army fought back but continued its withdrawal from the city,” Mussa Ibrahim told reporters.

The government says its army is withdrawing from the city and sending in armed tribesmen instead. Rebels say the announcement may be part of a ruse to mask troop movements or stir violence between rebels and locals in nearby towns.

Rebel leader Mustafa Abdel Jalil told a news conference in Kuwait that the Gulf state had agreed to contribute 50-million Kuwaiti dinars ($177-million) to his rebel council to help pay workers in the east of the country under its control.

“This amount will help us a lot in paying the salaries of employees who did not receive their little salaries for two months,” he said. “We are capable of only covering 40% of this amount. We are in need of urgent aid.”

The rebels have been seeking international recognition as well as material support from the west and the Arab world.

They have been unable to advance from eastern Libya as they fight back and forth with Gaddafi’s troops on the coastal road between the towns of Ajdabiyah and Brega, hampered by their lack of firepower, equipment and training.

Abdel Jalil also said the rebels had received weapons from “friends and allies”, but did not specify which countries or organisations had donated them.

Restarting oil production in rebel-held areas would be a huge boost to the insurgents. A rebel oil official said companies could resume work as soon areas are secure.

“For Sirte Oil and Zueitina, we have people ready to move in as soon as they are safe to move,” Wahid Bugaighis, head of the National Oil Company, said in Benghazi. He said rebels had made about $129-million from their only shipment of crude oil so far — exported this month with the help of Gulf Arab state Qatar — but had had to pay $75-million for a single cargo of gasoline.

Misrata bombarded
In Misrata, a mood of victory was short-lived and the prospect of a turning point in the conflict dimmed on Sunday.

“The situation is very dangerous,” rebel spokesperson Abdelsalam said by telephone from the city. “Gaddafi’s brigades started random bombardment in the early hours of this morning. The bombardment is still going on.”

Captured government troops said on Saturday they had been ordered to retreat after a siege of nearly two months, but rebels now say they believe it was a government ruse.

He said government loyalists might be trying to stoke tensions between Misrata and neighbouring towns, and that Gaddafi’s troops might return to the city later under the guise of intervening to protect local tribes from the rebels.

“What has been said by Gaddafi’s regime about withdrawal or suspension of operations has no basis in truth,” national council spokesperson Abdel Hafiz Ghoga told reporters in Benghazi.

“They’ve fallen back to the western area of Misrata,” he said, referring to Gaddafi’s troops. “They are also surrounding Misrata from its eastern entrance.”

At least three people were killed in the mountain town of Zintan, about 160km south-west of Tripoli, by fire from Gaddafi’s tanks and rockets, residents said. – Reuters