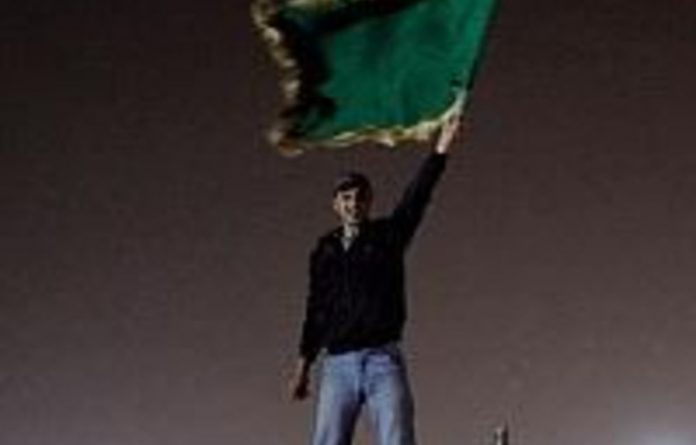 Nato bombs wrecked Libyan leader Muammar Gaddafi’s office in his Tripoli residence, as rebels in Misrata said they had pushed loyalist forces out of the city.

A Libyan official accompanying journalists shortly afterwards at Gaddafi’s compound said 45 people were wounded, 15 seriously, in the bombing. He said he did not know whether more victims were under the rubble.

“It was an attempt to assassinate Colonel Gaddafi,” he affirmed.

“This cowardly attack on Muammar Gaddafi’s office may frighten or terrorise children but we will not abandon the battle and we are not afraid,” he said, claiming that Nato’s battle was “lost in advance.”

At around 3am on Sunday, smoke was still rising from part of the building that was hit, watched by dozens of people shouting pro-Gaddafi slogans.

A meeting room facing Gaddafi’s office was badly damaged by the blast.

“Nato carried out a precision strike in central Tripoli last night,” a statement said. “The target was a Communications Headquarter that was used to coordinate attacks against civilians.”

In Misrata, 215km east of Tripoli, rebels made significant gains on Sunday in a key street in the besieged city, where residents have lived under a rain of shells and sniper fire for 50 days.

Several rebel sources said regime forces had been pushed out of Misrata, but rockets continue to hit Libya’s third city.

“Clashes took place on the western outskirts, but the rest has been cleaned up. There may be some soldiers hiding in the city, afraid of being killed, but there are no groups of soldiers left,” one said.

Broken pledge
Misrata had again been rocked overnight by the crash of incoming rockets and incessant gunfire, despite a pledge by the Libyan regime to halt the fighting.

By Monday morning the streets were mostly deserted, with many residents holed up inside buildings marked with the scars of weeks of battle, blasted by artillery and pockmarked by bullets.

The only sound was the voice of the muezzin from a local mosque, who chanted repeatedly “God is greatest, He is my only guide.”

Throughout a terrifying night, as salvos of Grad rockets and bursts of automatic weapons echoed across the city, the muezzin continued his refrain.

“He chanted for hours to calm people,” said Seilam Naas, 55, a resident of the Kharuba district and one of a few locals to venture out.

There were “completely charred corpses, some of them so badly burned that we aren’t sure they are human bodies,” he told AFP. “This is the first time we’ve seen such burns.

“The injured described much stronger explosions than usual, we have wounds created by the force of the blast, which shows that the explosion was enormous.”

According to figures provided by sources at hospitals across Misrata, around a dozen people were killed and at least 20 wounded overnight.

Sources said those caught up in the violence were all civilians — men, women and young children.

Rebel leader Taher Bashaga said: “It will take some time, I think, but then it will all go well and Misrata will be free for ever, God willing.”

“Many soldiers want to surrender but they are afraid of being executed” by the rebels, said Lili Mohammed, a Mauritanian hired by Gaddafi’s regime to fight insurgents in Libya’s third city.

Deputy Foreign Minister Khaled Kaim said the army had suspended operations against rebels in Misrata, but not left the city, to enable local tribes to settle the battle “peacefully and not militarily”.

“It is a trick, they didn’t go,” Bani said in the eastern rebel stronghold of Benghazi. “They have stayed a bit out of Tripoli Street but they are preparing themselves to attack again.”

Drones ‘criminal’
Gaddafi’s regime is accusing the United States, which launched its first Predator drone strikes over the weekend, of “new crimes against humanity” for deploying the low-flying, unmanned aircraft.

Drone strikes have so far hit a rocket launcher targeting Misrata and an SA-8 surface-to-air missile in Tripoli, according to Nato officials.

On the diplomatic front, British defence minister Liam Fox travelled to the US for talks on the conflict in Libya with his American counterpart Robert Gates, defence officials in London said.

In eastern Libya, meanwhile, a lull in the fighting has given families some respite in their search for missing loved ones in and around the strategic crossroads city of Ajdabiya.

“As things calm down, people are building up the courage to come out and report,” said Najim Miftah, a volunteer who has a binder of missing people that has doubled in two days with more than 70 new records.

Massive protests in February — inspired by the revolts that toppled long-time autocrats in Egypt and Tunisia — escalated into war when Gaddafi’s troops fired on demonstrators and protesters seized several eastern towns. — AFP