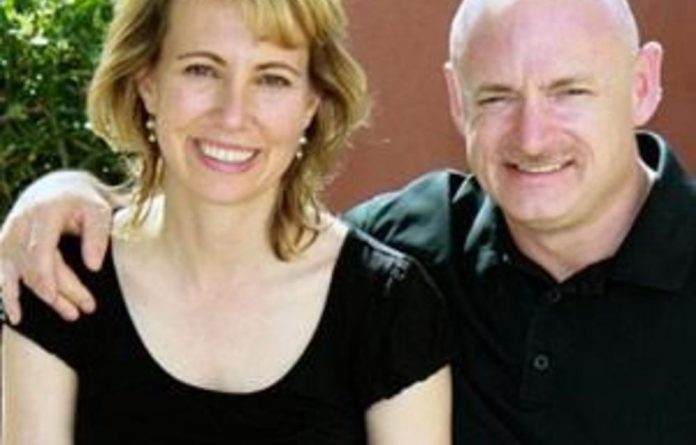 When US congresswoman Gabrielle Giffords was shot in the head in January, few thought she would survive. But her slow improvement is gripping the nation

When astronaut Mark Kelly blasts off at Cape Canaveral on Thursday afternoon, commanding a flight of the space shuttle Endeavour, millions of people will watch him and his crew soar into orbit. They will gaze at the fiery launch on televisions around the world, from beaches along the Florida coast and from special viewing platforms at the space centre. Among them, carefully hidden from public view, will be one very special pair of eyes: those of Kelly’s wife, Gabrielle Giffords, whose presence at the launch is nothing short of a modern medical marvel.

For Giffords should be dead. The previously little-known Democratic congresswoman for Arizona rose to fame in January when a lone gunman, Jared Loughner, attacked a meet-and-greet session in Tucson, killing six people and putting a bullet through Giffords’s brain. The tragedy sparked intense national mourning in the US and a fierce debate over violent imagery used in political discussion. President Barack Obama travelled to Tucson to lead a nationally televised memorial ceremony.

Central to the moment was Giffords’s astonishing struggle to survive her horrific wound. Loughner’s shot went in through her forehead and out the back of her head. At first falsely reported dead, it quickly became clear that Giffords (41) was clinging desperately to life. Slowly, shocked Americans began to track her progress, not daring to hope for the best until, bit by bit, good news trickled out. President Obama himself began the process, announcing during his memorial speech the first signs of progress with the words: “Gabby opened her eyes for the first time.”

Giffords’s presence at her husband’s shuttle launch will mark the latest triumphal milestone on her road to recovery at Houston’s TIRR Memorial Hermann hospital. It has overshadowed the shuttle’s science mission and even Obama’s expected presence at the launch. But it has been a difficult path for Giffords to get to Florida: her Texas physicians only gave the trip the go-ahead last week. “She is medically able and well enough to travel,” said Dong Kim, director of the Mischer Neuroscience Institute at her hospital. When told the news, according to Kelly, Giffords reacted with a fist-pump and a single word: “Awesome.”

That attitude sums up much of the positive news that has leaked out about Giffords’s progress and the happy spin put on it by an American media eager to wrest something good from an unbearably bleak event.

But, by many measures, Giffords’s progress has indeed been remarkable. From the bloodied figure rushed to hospital who had part of her skull removed to relieve brain pressure, she has taken firm steps towards not just survival but recovery.

Though the bullet ripped through the left side of her brain, which controls language, she has started to speak some simple words and phrases. She even played Scrabble recently (and won) by pairing up with her husband against other players. She has a newspaper read to her and fiddles around with an iPad. She asks for her favourite foods.

She goes through a daily routine of rehabilitation that involves a couple of hours of speech therapy, followed by occupational therapy and then physical therapy. The speaking part of her day often involves singing or music therapy, as a damaged brain often retains that ability better than pure speech. In fact, the trip to Florida is a big part of her rehab: first, as a much-needed break and second, as the achievement of a “goal” that is crucial to keeping patients working hard. Her progress, which some reports have said is in the top 5% of people with her kind of injury, has impressed neuroscientists around the country. “I think it is fantastic, especially as she has endured such a radical procedure as a craniectomy (partial-skull removal),” says Ricky Madhok, a neurosurgeon at Cushing Neuroscience Institutes in Long Island, New York.

‘You really have to be patient’
But there is still much to do. Giffords can get around with help but cannot walk unaided. She can write a little but has to use her left hand, not her usual right one, because movement on the right side of her body is seriously impaired. She takes time to articulate and form thoughts. “The initial reports were perhaps a little too optimistic,” says Kritis Dasgupta, a brain surgeon at the National Rehabilitation Hospital in Washington.

For a long time, her family and friends kept the truth of what happened in Tucson from her and she evidently believed she had suffered a car accident. Now, as she gets better, she has been told about the shooting but reportedly many details — including the deaths of friends and staff — have been kept hidden. Though Kelly told CBS News’s Katie Couric last week that Giffords’s personality was “100% there”, it is clear she still bears a grave injury. “You really have to be patient and this experience has taught me a lot of patience,” Kelly said. “So, just giving her time to compose her thoughts and put the words and sentences together is, you know, at this phase in her recovery, really what she needs.”

But there is daily improvement, albeit slow. The remarkable thing about the brain — especially in someone relatively young — is that healthy parts can learn to take over the functions of damaged areas. That is a process that can go on for years, ensuring gradual improvements may continue for a long time to come. One man who knows about this intimately is Ezriel Kornel, a neurosurgeon who helped treat Jim Brady, Ronald Reagan’s press secretary, who was shot in the head during the failed 1981 assassination attempt on the president. Like Giffords, Brady was first reported wrongly to be dead. But, though he still has slurred speech and limited motor control, he has returned to active public life, spearheading a gun-control campaign. Kornel says there is no reason to think Giffords might recover any less than Brady. “The brain in someone relatively young has the ability to relearn,” he says. “She was also not in a coma for very long and that indicates there is probably a lot of healthy brain there.”

Other factors have played a role in Giffords’s survival and progress. She was taken to hospital speedily, ensuring the maximum survival of brain tissue. “It is a simple equation: time is brain,” says Madhok. Then there was the skill of the team of surgeons in Arizona. Finally, there was the sheer fortune of the bullet’s path through her head: it went straight through, ensuring much of its kinetic energy was expended outside her skull. It also limited its path to one side, neither crossing hemispheres nor penetrating the brain stem, both of which would have seen even more catastrophic injuries. “If the trajectory of the bullet had been a couple of degrees off, then it could have been a completely different situation,” says Dasgupta.

Although Giffords was already a public figure, she has actually become more of one now that she has been shut away in hospital. Ever since Obama made his dramatic announcement that she had opened her eyes, the US has grasped over-eagerly at any sign of progress. From when she spoke her first word by asking for “toast” to the news that she had touched her husband’s face, the public has urged Giffords down a road many perhaps feel will lead back to her previous life. She has been put on a global pedestal. She even made it on to Time‘s 100 Most Influential list. In recent weeks, almost $500 000 in donations has poured into her virtually nonexistent re-election campaign. Giffords is now a household name, even though she lives in a hospital. Indeed, it is telling that, despite the vast interest in her recovery and her trip to Florida, not a single photograph of Giffords has been released since the shooting. The only glimpse of her in recovery has been a shot of her hand, firmly grasped in her husband’s as he sat by her bedside. That will not change in Florida.

For the brutal truth is that Giffords is unlikely ever to be entirely back to “normal” again. But, because of the high emotion of her shooting, Americans are investing in a perfect happy ending, with Giffords returning to Congress and getting back to work. Many medical observers think that will be unlikely. Yet the key thing is to see what “recovery” really means and who should be making that judgement. It is not the media — eager to tell a happy story — who should define Giffords’s recovery. Nor is it the watching American public. It should not be measured by whether she can walk, talk or eventually appear as if she was never injured. Looking at where Giffords was on the day of the shooting, she has, in many ways, already recovered more than enough to make anything else a pure bonus.

“She was shot at point-blank range in the head and she survived,” says Kornel. “She will most likely be able to be a human being who appreciates her life and her loved ones. To me, that’s already a real miracle.” When Kelly blasts off into space under Giffords’s gaze tomorrow, many Americans will still be longing for a happy ending for the couple. But perhaps they should recognise it has already happened. – guardian.co.uk