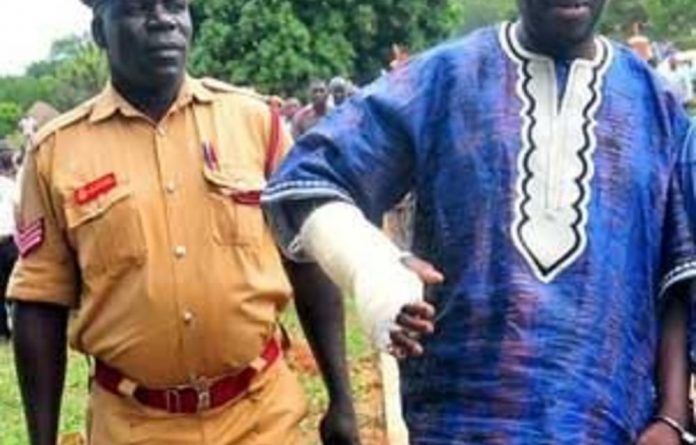 Police cracked open the window of Uganda’s top opposition leader and fired tear gas into his vehicle on Thursday, wounding him in the eye during a fifth protest march over rising costs.

Kizza Besigye’s arrest came one day after his release from prison for leading a similar “walk to work” protest march last week. Besigye says the demonstrations are to protest corruption in Uganda’s government and the rising cost of food and fuel.

A police spokesperson, Judith Nabakooba, said Besigye was arrested for not following police orders and for leading a chaotic demonstration that snarled traffic and saw his supporters hurl stones at passing vehicles.

Besigye was arrested about 1,5km from Kampala’s city center. In Besigye’s first protests he attempted to walk to Kampala from his country home. But during his last two marches he drove closer to the city center and then walked toward town, where he attracted hundreds and perhaps thousands of supporters in the street.

An Associated Press reporter who witnessed Thursday’s arrest said that Besigye briefly got out of his vehicle but locked himself in it when police moved in. The police used an ax and the butts of their guns to smash open a window, and then fired tear gas into the vehicle. About 100 Besigye supporters were near the scene.

AP photos afterward showed Besigye using his shirt to wipe his eyes from the effects of the gas. On his right hand is a white cast, from when he says police broke one of his fingers last week by firing a rubber bullet during a demonstration.

Besigye came second in Uganda’s February presidential election to President Yoweri Museveni. It was his third straight loss to Museveni and threatened to end his political career. But Uganda has seen huge price spikes in food and fuel in recent months, giving Besigye — and his “walk to work” protests — a political resurrection.

Besigye appeared in court on Thursday and was released on bail. Besigye’s lawyer said the opposition leader had been wounded in the eye by the gas and fell sick.

A Red Cross spokesperson said 11 people were injured by the gas, including two pregnant women and one 4-month-old baby when tear gas was fired at a hospital.

Museveni has vowed to crack down on the protests and has said repeatedly his government won’t be overthrown like those in Egypt and Tunisia. Museveni has led Uganda for 25 years. Official returns showed him winning 68% of the February vote, though Besigye says those returns were falsified and that both he and Museveni got just under 50%.

The top US diplomat for Africa, Assistant Secretary of State for African Affairs Johnnie Carson, said he spoke to Uganda’s foreign minister on Thursday.

“We have expressed our concern about what appears to be harassment of Dr. Besigye,” he said. “I have myself spoken to the Ugandan foreign minister about this and have urged that the Ugandan government act both in a responsible and civil fashion in dealing with the arrest of individuals attempting to carry out peaceful protests.”

The US Embassy in Kampala this week said it was troubled by reports that the Ugandan government has sought to restrict media coverage of the protests, including on Internet networking sites. The embassy said that “freedom of expression and peaceful assembly are fundamental human rights and a critical component of democracy”.

Besigye told AP in an interview at his home last week that many Ugandans face a “crisis of survival,” that the health care system has broken down and that young people cannot find jobs. He said that Museveni’s government is terrified of the protest marches, the reason he has been arrested for walking toward the capital.

Besigye was the president’s personal physician before being dismissed for saying in 1999 the government was becoming a one-man dictatorship.

Uganda is a young country, with half its nearly 35-million citizens under 15. An estimated 1,2-million have HIV/Aids. The average yearly income is just $1 200, though many here have hopes — and fears — over newly discovered oil that will soon be pumped. An oil curse has befallen several African countries, providing more incentive for corrupt leaders to remain in power in order to steal from public coffers. — Sapa-AP

The Kabaka of Buganda’s fleet of Rolls-Royces was seized in a coup nearly 60 years ago. Now his successor has brought the only known ‘survivor’ home
Read more
Africa

Museveni isn’t worried about winning the election, but about what comes next

Uganda’s president is likely to win the next election. But Bobi Wine’s constituency poses the most serious threat yet to his continued rule
Read more
Africa