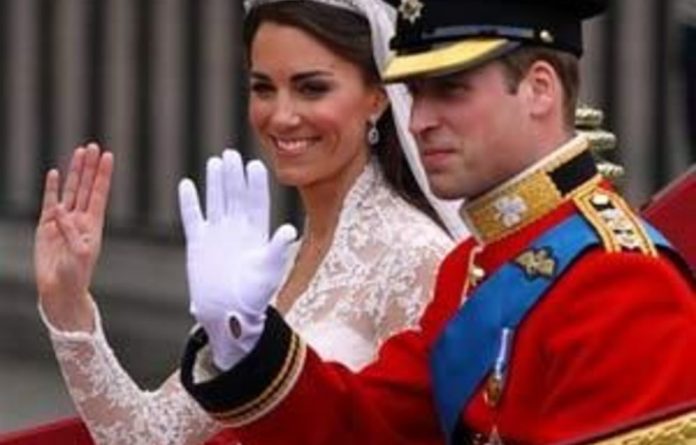 In the biggest royal celebration for three decades, Kate, wearing an ivory and white satin wedding dress with long lace sleeves, a veil and a flowing train, exchanged vows with William, who wore a scarlet military tunic.

“I will,” the future king and queen each pronounced solemnly, before William put a ring fashioned from a nugget of Welsh gold on her finger and the Archbishop of Canterbury Rowan Williams pronounced them man and wife.

William (28) mouthed “You look beautiful” to his bride after she walked up the aisle to the soaring strains of a choral piece that was used at the wedding of William’s late mother Diana to Prince Charles in 1981.

The absence of Diana, who died in a car crash in Paris in 1997, was keenly felt despite the joyful atmosphere of Friday’s service, which also featured a hymn used at her funeral in the same abbey.

Hundreds of thousands of people waved Union Jack flags in the streets outside while 1 900 guests including footballer David Beckham and singer Elton John were invited to the service in the abbey.

Two billion people — a third of the world’s population — are expected to have watched Diana’s eldest son wed the commoner he began dating at St Andrews university in Scotland eight years ago.

It is Britain’s richest display of pageantry since that wedding 30 years ago and offers Britain’s royal family a chance at renewal after Charles and Diana’s traumatic public split before her tragic death.

“They will make the monarchy fashionable again. It’s good for the country,” said Louise Akehurst (25), an administrator from London.

The couple will now be known as the Duke and Duchess of Cambridge, after Queen Elizabeth II, William’s grandmother, bestowed the titles on them on the morning of the wedding.

William Arthur Philip Louis — as the second in line to the throne was called during the service — arrived at the church 45 minutes early accompanied by his younger brother and best man Prince Harry.

Kate (29) had waved to the crowd as she arrived at the abbey with her father Michael in a Rolls-Royce limousine. She took four minutes to walk down the aisle, which was lined with trees especially brought in to create the feel of an English garden.

Middleton walked up the aisle to The Introit, from the Latin meaning entrance, which was used as The Anthem in 1981. The first hymn — Guide me, O thou great redeemer, was the last sung at Diana’s funeral 14 years ago.

William, a Royal Air Force search and rescue helicopter pilot, winked and shared a joke with Kate’s father after appearing to tell his bride she looked beautiful.

Kate, however, did not promise to obey her husband in her marriage vows — following in the footsteps of Diana, who married Charles on July 29, 1981 at St Paul’s Cathedral.

Guests inside included footballer David Beckham, singer Elton John and “Mr Bean” actor Rowan Atkinson. Fifty members of the royal family and dozens of foreign royals were due after William.

Hundreds of thousands of campers transformed The Mall, the wide boulevard leading to Buckingham Palace, into a sea of Union Jack flags.

Sandra Russell (65), who is of French-British nationality, said she thought the marriage would be successful because Kate is “much older than Diana was at the time, much more mature and they are marrying for love”.

“Charles was under the pressure of his family. People here are still angry at him, and Camilla [his second wife] too. I hope William will be the next king.”

After the service, the newlyweds climbed into a horse-drawn open carriage to make the journey from the abbey to Buckingham Palace where the couple will follow tradition by appearing on the balcony with the royal family and kissing.

About 5 500 street parties are expected across Britain on Friday, including in the Scottish university of St Andrews, where William and Kate met, and in the bride’s home village of Bucklebury.

More than 8 500 journalists and technical staff are covering the wedding for a global audience. — AFP