Barca has advantage over Madrid with final on line 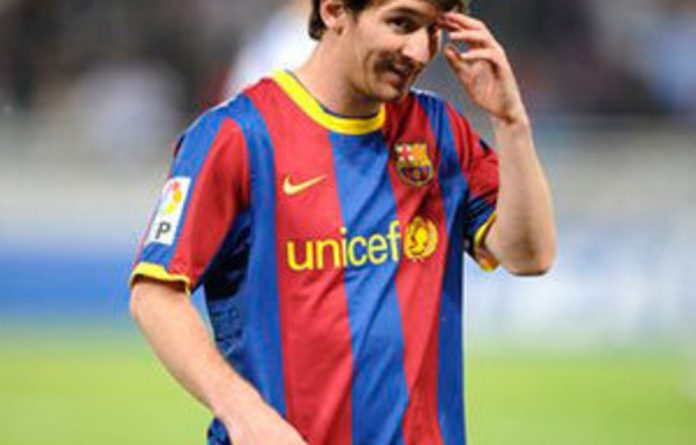 Barcelona holds the advantage heading into Tuesday’s return-leg semifinal against Real Madrid as the Spanish giants’ hostile four-match series closes with a spot in the Champions League final on the line.

Barcelona is the clear favorite after goals from Lionel Messi secured a 2-0 victory at Madrid, which is without suspended defenders Sergio Ramos and Pepe, along with coach Jose Mourinho, who is banned after being sent off in the first leg.

Madrid will have to abandon the defensive tactics used in the three prior meetings in just over two weeks, during which Madrid won the Copa del Rey final after a 1-1 league draw.

It’s expected to be another ill-tempered contest after the clubs denounced each other to Uefa’s disciplinary committee after the first leg.

Barcelona reported Mourinho to Uefa for hitting out at the club and counterpart Pep Guardiola, accusing the Barca coach of having won the 2009 Champions League after “scandalous goings-on at Stamford Bridge”, when Chelsea was denied several penalties during a semifinal defeat.

Mourinho also criticised the first-leg referee Frank de Bleeckere, suggesting the official favored Barcelona in last year’s semifinal with Inter Milan, which the Italian club won on the way to the trophy.

Madrid posted a video on its website calling on the Belgian referee to avoid “falling for Barcelona’s theatre”, while the Spanish capital club alleges Busquets called its Brazilian defender Marcelo “Monkey, Monkey” following their run-in in the first-leg.

Uefa is expected to decide later on Monday if any player will be suspended for Tuesday’s match as a result of the incidents.

Off-field issues aside, the return leg offers a big test for Mourinho, who said the series was finished following the first leg result.

Show his mettle
The Portuguese coach must show his mettle and hope his team at least scores twice to force extra time. He certainly has enough talent with Cristiano Ronaldo rested in Saturday’s 3-2 defeat to Zaragoza.

Barcelona carries a number of injury concerns into Tuesday’s match, just as it did in the first leg, although it should know Monday whether Andres Iniesta will return.

Defender Gabriel Milito was injured in Saturday’s 2-1 defeat to Real Sociedad, while left back Maxwell could return. Eric Abidal and Adriano are both out, though.

Barcelona’s first league loss in seven months stopped its unbeaten run at 31, leaving it one game shy of matching the longest streak in league history. The Catalans admitted the matches against Madrid had been a distraction.

“What happened today was a lesson. Like any team we can win or lose,” Guardiola said after the loss in San Sebastian. “We were coming off a complicated situation.”

Madrid players acknowledged as much after losing to lowly Zaragoza, though they remained optimistic.

“We hope to play a great game. We believe we can do it,” midfielder Kaka said. “Madrid can never stop fighting.”

Mourinho can expect a hostile reception if he takes his place in the stands of the Camp Nou, where he spent four years as an assistant coach but has since become a hate figure following bitter Champions League matches with Chelsea and Inter prior to Madrid.

The winner heads to the May 28 final at Wembley and is expected to be joined by Manchester United after the English club won 2-0 at German opponent Schalke. — Sapa-AP