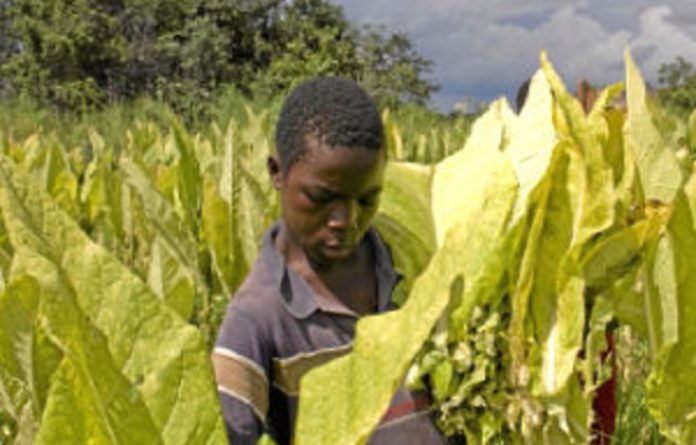 At the height of Malawi’s tobacco harvest, the lush fields of the country’s key tobacco growing district, Kasungu, are filled with labourers picking the big green-yellow leaves. Many of them are children.

Nothing much has changed since the international child rights NGO Plan exposed in a 2009 report that tens of thousands of Malawi’s child­ren work on tobacco farms. Yet in the past few years, fewer than 5 000 have been relieved from the hazardous work.

Malawi continues to have the highest number of child labourers in Southern Africa, with more than 78 000 children working on tobacco farms, according to Plan. They receive an average of R1,20 for 12 hours of unrelenting work. Some of them are only five years old.

“The child-labour situation is still very bad,” said Grace Masanya, a Plan Malawi child protection coordinator. “Children handle the tobacco with their bare hands and inhale the dust from the dried leaves. They work until late at night. They even apply pesticides.”

The health risks are high. The handling of the leaves is done largely without protective clothing and the children absorb up to 54mg of dissolved nicotine through their skin — which is equal to smoking 50 cigarettes. As a result, many suffer from green tobacco sickness (GTS). The symptoms including severe headaches, abdominal pain, muscle weakness, coughing and breathlessness.

No time for school
One of those children is five-year-old Olofala. With his six siblings, who are between the ages of five and 15, he helps his parents every day in the tobacco fields of Kasungu. When asked if he would go to school next year, Olofala shrugged his shoulders. One thing is clear to the boy already — work and survival come first, education second.

At the age of 12, Olofala’s sister Ethel is only in grade three. She attends school irregularly, either because she has to work or because she is sick. “I cough. I have chest pains and headaches. Sometimes it feels like you don’t have enough breath,” she said.

The situation persists despite the fact that Malawi is a signatory to many United Nations and International Labour Organisation (ILO) conventions aimed at limiting child labour. Malawi’s national law also condemns the employment of children under the age of 14 years, but the government only drafted a Child Labour National Plan of Action (NAP) last year to translate these policies into concrete programmes.

Yunus Mussa, the minister of labour, said in the introduction to the official NAP document in April last year: “The Malawi government fully recognises the far-reaching adverse impact of child labour on children.”

But what Malawi lacks most is a national child-labour policy. Although one has been drafted over the past two years, the government seems reluctant to pass it.
“The legal framework is very weak and it could take years until the child labour policy is ratified,” Tomoko Horii, a Unicef child protection programme officer, said. The government’s promises to eliminate child labour were largely window dressing in response to international pressure, she said.

Even the NAP, the newest piece of legislation, lacked specific targets for the reduction of child labour and, most importantly, an appropriate budget. “The budget allocation is minimal. So far all NAP projects have to be financed by international NGOs,” Horii said.

The district child-labour office in Kasungu, for example, only received a minute budget of R2 290 a month. “That’s hardly enough to fill up your tank to visit the farms,” Masanya said.

Another major stumbling block is the country’s poor economic situation. Malawi is one of the least developed countries in the world, ranking 164 out of 177 countries on the 2007/2008 Human Development Index. About 40% of its 13,2-million citizens live below the poverty line of $1,25 a day. Parents therefore involve their children in economic activities to provide food for the family.

Also the education system is weak and hardly motivates them to send their children to school. There is a shortage of 30 000 classrooms in the country and there is an average of 88 children a class. Only 35% of child­ren complete primary school. “The quality of education is extremely low. Unless the sector scales up to offer quality education to all children, they will continue to work,” Horii said.

Lack of political will
The government has a big incentive to protect tobacco farmers. Malawi is the world’s fifth biggest tobacco producer and an estimated 70% of Malawi’s export earnings come from tobacco — and the country depends on those.

But despite the huge profits of multinational tobacco companies, Malawi’s farmers struggle to break even. This forces them to look for ways to cut costs — and this means more children are being exposed to exploitative and hazardous working conditions, according to Plan.

Farm owner Fraston Mkwantha, who plants 15 hectares of tobacco in Kasungu district, appears to be ignorant when questioned about child labour, even though a good number of minors, including his own grandchildren, work on his farm.

One of them is 15-year-old Felix, a stocky teenager. “I work Monday to Saturday, from seven in the morning to 11 at night,” said Felix, who dropped out of school in grade five and has worked for Mkwantha since June last year.

For an entire year of labour, he has been promised a salary of R915. But it remains to be seen whether Felix will ever see his money. “We have many reports of children who are lured into labour with promises of good pay. But at the end of a whole growing season, all they get is an old sweater,” Masanya said.

Without legal penalties, it was difficult to force farm owners to respect the law, according to MacDonald Mumba, Plan Malawi Rights of the Child adviser. “Some estates follow anti-child labour regulations but others purposefully flaunt the law in the interest of higher profits. To put real pressure on farmers, we need stiff punishment and prison terms,” he said.

During the past two years, only 49 farm owners of Kasungu’s 22 000 registered tobacco farms had been prosecuted, Mumba said, and most got away with a R230 fine.

The international tobacco giants such as Philip Morris International and British American Tobacco also contribute to the problem. Despite the fact that all of them have policies that prohibit buying tobacco from farms that employ children, they remain the primary buyers of Malawian tobacco, which is found in the blend of almost every cigarette smoked in the West.

Perhaps to relieve their guilt, since 2001 a group of tobacco companies, growers and unions has financed the Geneva-based Eliminating Child Labour in Tobacco Growing (ECLT) Foundation, which runs a number of health, education, food security and water-supply programmes in Malawi’s tobacco-growing districts.

Since 2002, the ECLT has ploughed R53-million into the country. “We mainly focus on preventative approaches to create an environment in which children can be withdrawn from child labour,” Marilyn Blaeser, ECLT executive director, said.

That winning the fight against child labour might take decades is illustrated by the low success rate of getting children removed from the tobacco fields. Since 2006 ECLT has managed to withdraw only 2 160 children and since 2009 Plan has managed to remove only about 2 000 children.

But for children like the 17-year-old Gordon, who has worked in Kasungu’s tobacco fields since he was five, the planned inventions will come too late. “I have never attended school. I can’t read or write,” he said shyly. He hoped that his little sister, Bahati, who at the age of five is already helping with the harvest, will have it better one day.

Professional or working class, unemployment has hammered black women the most