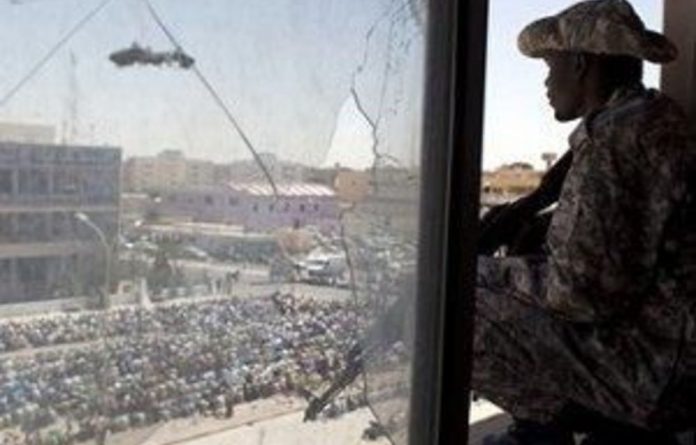 Green bunting and pictures of Muammar Gaddafi festoon a Tripoli district where two months ago protesters marched in the streets. Locals whisper on corners, youths avert their gaze. Men watch passersby from unmarked cars. The fear is palpable on Tripoli’s streets, fear of speaking out and fear of conscription as Nato air strikes hit Gaddafi’s forces and fighting rages in Misrata and the Western Mountains.

More than two months after an uprising against Gaddafi’s 41-year rule saw rebels seize the eastern part of Libya, the army has crushed dissent in the capital and its crack down on opponents elsewhere in the west is spreading fear.

“No one wants him. If the people in Tripoli were not so scared they would rise up. They did in February, in Tajoura, in Fashloom, in Souq al-Jumaa, but he crushed them,” said one shopkeeper, changing the subject when other customers came in.

In the Fashloom district, a tent flanked by a big picture of Gaddafi stands a few metres from the charred offices of the local revolutionary council, set alight during the unrest that spread briefly in late February and early March before fizzling out.

Rubbish gathers in the alleys, unasphalted and bumpy off the main street, even in this vast oil-exporting country which has enough cash to provide infrastructure for its seven million people.

Tripoli residents say activists have mounted sporadic night-time attacks on Gaddafi’s forces and hold gatherings after dark night in dissident areas, but most are too afraid to act after what many believe has been a spate of mass arrests.

Claims of arrests are almost impossible to verify.

The government has cut off internet access across Tripoli, except in the closely-watched hotels hosting foreign journalists, making it difficult for young activists to organise protests or to post footage or pictures of their gatherings or attacks on the Internet. The only gatherings allowed are for Friday prayers and they are closely monitored.

Libyans widely believe the government listens to their phone calls. Cellphones do not send SMSes, and the only way to speak freely is to meet in person. With informants everywhere, the risk of being followed or spotted is high.

Foreign journalists, monitored closely by the government, are forbidden from visiting dissident areas alone and it is difficult to interview residents freely. Few will speak with government minders looking on and their four-wheel drive cars, with rear number plates often removed, inspire fear.

No war, no fighting
One Tripoli resident said families had been warned that the army may call men between 18 and 40 years old to fight. The army has yet to enforce conscription, the resident said, but some families were already thinking of sending their sons abroad.

“There are already volunteers and some of them are on the front lines. This is different. People are afraid. I know one man who is taking his son to Tunis,” said the resident, looking furtively around for potential eavesdroppers.

“People see this man’s time is over. They just want him to go and to spare them the war. If he left, then the Nato strikes would stop so why is he staying? Things are getting difficult for people. Prices are rising.”

All over Tripoli, the economy has slowed. Work has stopped on a golden-domed mosque in the centre of town. The cranes that once worked busily during the capital’s building boom are still.

Foreign investors have fled and so have foreign workers on whom bakeries, restaurants and hotels relied. The Turkish staff at the Rixos Hotel, where foreign journalists live, have left.

For weeks, petrol queues have snaked around corners as Nato-enforced sanctions bite. There is no public transport in Tripoli and tempers are flaring as people are no longer able to get to work or to take their children to school.

In the old medina of Tripoli, the Athar restaurant that overlooks a cluster of ruins is shut, its owner sitting with friends outside the cobbled alleys that once attracted tourists.

“We had 40 staff and they have gone. Only four are left so we could not keep going. We are only doing takeaway,” said owner Mohammed Shams. “We have three restaurants. Only one is open.”

At his one open restaurant, only two tables were occupied at lunch, one by foreign doctors, the other by foreign journalists.

The Tripoli government says Libya needs a transition to a more transparent system. It says the sudden removal of Gaddafi would only turn Libya into another Iraq or Somalia, countries torn apart by years of violence.

“You will have destruction and a lack of stability for years and years and years without the fruits of transparency and human rights,” said government spokesman Mussa Ibrahim.

It is a fear shared by many Libyans, regardless of whether they support Gaddafi or not.

“People just want it to be over. They don’t care who is in power,” said the resident. “The only thing that worries them is what comes next. People fear a vacuum. They are scared. It is the only thing preventing a collapse.” – Reuters