Toilet trouble leaves Rammulotsi on the edge of its seat 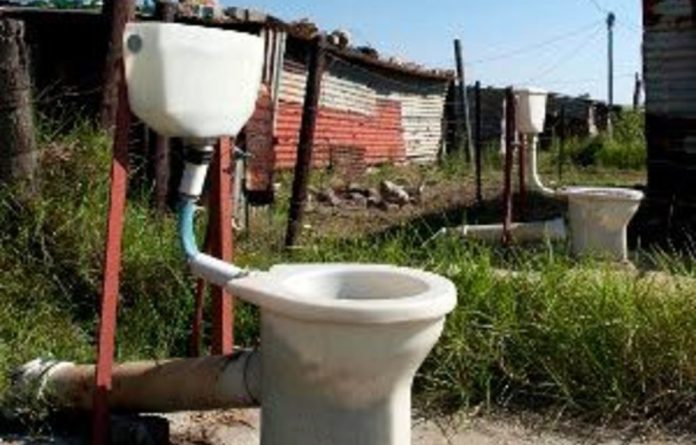 In the week leading up to the local government elections, the unenclosed toilets built in Rammulotsi, near Viljoenskroon in the Free State, have thrust the small, rural town into the national spotlight, leaving its residents flustered, wary and more than a little bit defensive.

The harsh mood soon receded, however, after residents realised she was not, as they had initially supposed, from the Democratic Alliance.

“I was taking pictures of the toilets; there were a few people around and no one seemed bothered, at first,” said Cronjé.

“But someone must have been keeping a lookout, because after about 15 minutes a bakkie with ANC branding on it pulled up, as well as about three or four other cars, and soon I was surrounded by about a dozen people who demanded to know why I was there taking pictures.

Councillor
Among the crowd who turned out to greet Madelene was the ANC’s candidate for the area’s ward council, the incumbent Simon Mokoena.

The welcoming committee he led was eager to determine by what providence Cronjé had come to find herself parked near the unenclosed toilets, taking pictures of the lonely Democratic Alliance election poster adorning a nearby house.

Was she absolutely sure she wasn’t from the DA, they inquired, in answer to which she again offered her credentials — she was there to take pictures for the Mail & Guardian.

The group of concerned citizens asked Cronjé whether, in her photographic exploits that afternoon, she had included any local faces in the pictures. Cronjé conceded that she had, and at their insistance she deleted these images from her camera.

Suddenly, the ANC
By this stage, the crowd’s fever had ebbed, and Cronjé was invited to take pictures of an ANC poster, which they graciously produced and affixed to the inside of an unexpectedly enclosed toilet, one of at least several dozen in an area adjoining the section where the estimated 1 600 open toilets causing all the bother stand.

After a few more minutes of cordialities and small talk, during which councillor Mokoena declined to say how long the toilets had been standing thusly, exposed and unenclosed, the group regretfully allowed Cronje to say her farewells and make her way back to M&G headquarters.

Earlier in the day, the provincial ANC said that they were aware that the area’s mayor had links to the firm awarded the contract to construct the toilets.

Moqhaka mayor Mantebu Mokgosi had informed them that her husband’s company was the subcontractor in question.

At a media briefing in Bloemfontein on Thursay morning, Free State ANC secretary Sibongile Besani said the provincial executive had decided to handle the matter on a political and not on an individual level — this despite ANC Youth League president Julius Malema’s call, during a recent visit to the Rammulotsi, for “heads to roll” over the matter.

Besani said the Free State government had stepped in and asked three contractors to start enclosing the open toilets.

“We want this badness to go away,” he said, adding that the plan was to close 150 open toilets a day to remove the “dent” in the ANC name.

It was estimated that the task would take more than a month.

By that time the local government elections will have come and gone, and for the residents of Rammulotsi the matter — just like their toilets — will finally be closed.
— Additional reporting by Sapa