Skull of my country 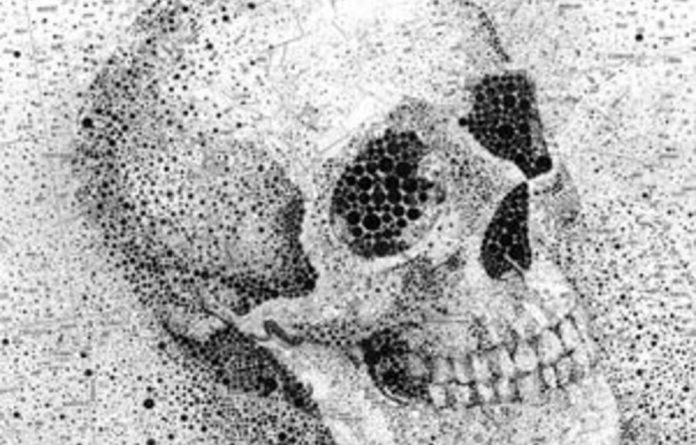 ‘The props list for Act V Scene 1 in Hamlet calls for not one but three skulls,” writes Elizabeth Burroughs in an essay on the work of artist Joni Brenner.

The essay is part of a book, itself part of an exhibition called Life of Bone, which opened last week at the Origins Centre at Wits University.

On show are works by Brenner, Gerhard Marx and Karel Nel — and three skulls: that of a modern chimpanzee, the reconstructed fossil skull fragments of an early anatomically modern human (labelled Border Cave 1, who lived between 71 000 and 171 000 years ago on the border between South Africa and Swaziland) and the fossilised skull of a young Australopithecus africanus, about three years old at the time of death and estimated to have lived about 2,5-million years ago. This is better known as the Taung Child.

That the artists managed to convince sponsors and the university to display the original Taung fossil is no mean feat, an exercise in complicated logistics and great expense the fossil exists in three parts, none of which is ever allowed to touch the others, and each is in a specially cast mould. It is housed in a high-security cabinet provided by palaeo-anthropologist Professor Lee Berger. Security personnel will limit the number of people allowed into the exhibition at any one time.

“It is special — the chance to see [the fossils],” Brenner says, “but this exhibition also explores what it is to be human. Skulls are quite emotive; they are such reminders of presence and absence.”

Brenner began working on the concept of the show five years ago and, in discussion, found synergy with Marx and Nel. Later, during a sabbatical, she approached writers to engage with the artists’ work and write essays for the book. She netted contributors such as human geneticist Himla Soodyall, author, psychologist and professor Kopano Ratele, and palaeo-anthropologist Donald Johanson, who discovered the Ethiopian skeleton known as Lucy.

It is perhaps one of the most important publications to emerge from South Africa and should be read as a compulsory preamble to the Freedom Charter, because it asks: “Why am I here?”

The artists and Burroughs, who wrote about each of the artists for the book, all express a fascination with the way science uses often scant evidence to reconstruct the past. “Science is supposed to be objective but we bring our own history to it just as much as [we do to] art,” Burroughs says.

Coordinates of history
The artists explore this with exquisite grace — a wall of watercolour skulls from Brenner, human in one room, Australopithecus in another; meticulously recrafted maps by Marx, using shorelines and constellations to recreate skulls, whereas Nel works in words and earth, panels of dust and soil collected from around the world, then etched with their place names.

“The works are quiet,” Nel says. “We create out of our memory, our knowledge.”

Nel talks about the resonance, the power of the words he juxtaposes, coordinates of history: Taung/Piltdown, Swartkrans/White Sands. Swartkrans in Gauteng is where the earliest evidence of the controlled use of fire was discovered; White Sands in New Mexico was the site of the first nuclear weapons test.

“I’m interested in the space between there,” Nel says, pointing at a panel reading Bastille, “and there.” The panel next to it says Soweto. “The critical mass in each case. The revolutionary acts that create the democratic process.”

Deeply political
Nel dug the soil by hand in Paris and posted it back to himself labelled as “pigment”. In Soweto he took soil from Kliptown and from locations near where Hector Pieterson was shot. Nel says that Marx “looks at horizontal landscapes; mine are vertical.” Brenner’s work, he says, “is both outwards and inwards.”

“Without being overtly political, the works are deeply political,” Burroughs says of Nel, but really it applies to all three.

“When you approach a skull day by day, it brings life to it,” Marx says. “In a different context it could be read differently. We live in a kind of Gothic environment, saturated with violence. Skulls, ribs, femurs . it could be Rwanda.”

For one of his works, Marx spent a year cutting stars from star atlases with a scalpel, using the excised points to create a skull. “In a sense it’s a photograph because it’s made with light,” he jokes. “I called it Dark Sky, because I’d removed all the coordinates. The skull is the moment of death.”

Of Brenner and Marx, Nel says their works “strip away the likeness of the flesh to look at the scaffolding. When one puts on an exterior we don’t always understand the complexity of what lies beneath.”

Life of Bone runs until May 31 at the Gallery, Origins Centre, Wits

Protests against colonialism and fees made an impact, but it’s too soon to judge SA’s rise or fall.
Read more
Advertising
Continue to the category
Education