IFP bleeds in its strongholds 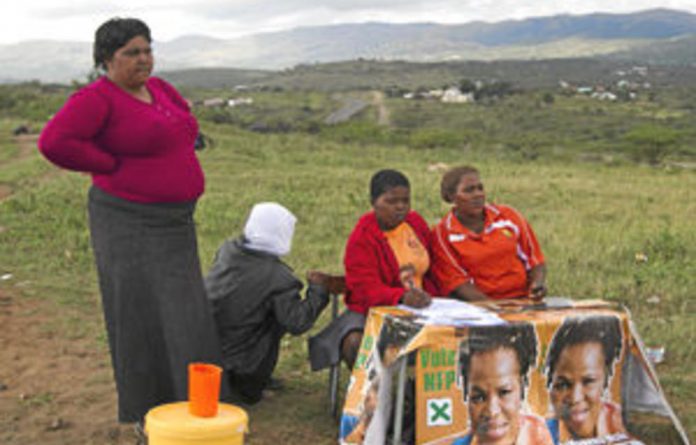 The beleaguered Inkatha Freedom Party’s control of 32 of KwaZulu-Natal’s 61 municipalities was under serious threat as results from the local government elections rolled in on Thursday.

Of the 16 municipalities for which the Independent Electoral Commission could confirm results on Thursday afternoon, the IFP lost its majority to the ANC in six, including the Amajuba district municipality and rural local municipalities such as Estcourt, Greytown and Dundee. The ANC retained its control of the other municipalities where results had been confirmed.

In the north of the province early results suggested that the National Freedom Party (NFP), which broke away from the IFP under former IFP chairperson Zanele Magwaza-Msibi, had split Inkatha’s traditional support base.

In Zululand towns such as Vryheid and Pongola the three main protagonists were running neck and neck. At the time of going to press, in the IFP’s Nongoma stronghold, the NFP had 43,98% of the proportional representation votes, the IFP 41,73% and the ANC 13,65%.

The scene is set for coalitions in several rural municipalities, which could see the IFP, which has suffered declining electoral fortunes since 1994, being further sidelined.

Elections: The morning after

Party leaders returned to the IEC results centre in Pretoria early on Thursday morning to some interesting developments — including that the DA retained the hotly contested Midvaal area. We spoke to ANC spokesperson Jackson Mthembu and DA chief strategist Ryan Coetzee.

The possibility of coalitions also poses a conundrum for the NFP. According to insiders, the party has yet to discuss this but it is concerned about the political message that would be sent out by joining forces with either of the other two main parties.

As one NFP insider put it: “If we side with the ANC we would appear to be the ‘ANC project’ that [IFP leader Mangosuthu] Buthelezi has accused us of being. “However, if we form a coalition with the IFP, our supporters will be asking us why we broke away. It’s a difficult situation to manage.”

None of the parties has much time — municipalities have two weeks after the IEC has gazetted the election results to elect a mayor and speaker and constitute an executive committees. The NFP will also discuss the possibility of abstaining from a vote on coalitions when municipal executive committees are constituted to avoid the dilemma of siding with either the IFP or ANC.

While the IFP has haemorrhaged votes to the ANC, the latter has also continued to make inroads in rural areas, focusing on both party activity and provincial government service delivery programmes.

In the IFP-controlled eMangusi local municipality, where the ANC had its first provincial election rally of the year, the party was leading with 64,4% of the vote, compared with the IFP’s 25,45% and the NFP’s 8,5%. eMangusi, with Jozini, Hluhluwe, Mtubatuba, Hlabisa and Umhlabuyalingana, falls under the Umkhanyakude district municipality, which borders Mozambique and is one of the province’s poorest areas. However, the ANC provincial government has rolled out houses and electricity in the area in recent years.

Besides Hlabisa, the ANC was leading in all the district’s municipalities at the time of going to press.

Zweli Mkhize, the KwaZulu-Natal premier and ANC provincial chairperson, said the gains the party were making in rural areas were because people were responding “to the work the ANC is doing as a party and our work as a provincial government”. Mkhize said that the ANC was “open-minded” about forming coalitions.

The ANC was also doing well in KwaZulu-Natal’s major urban areas. It was on course to win the vital economic hub of Richards Bay, which was controlled by the IFP from 1996 until the ANC won control of it during a floor-crossing period in 2006.

Despite Pietermaritzburg, the provincial capital, being put under administration because of the ANC municipality’s mismanagement of the coffers, the ANC was leading the race with 62,17% of the vote compared with the Democratic Alliance’s 20,81%.

In eThekwini the ANC was leading with 53% compared with the DA’s 27% and the Minority Front’s 6,3%. The ANC’s majority in the city has never been under serious threat. Not surprisingly, the ANC also took from the IFP the Nkandla ward, which includes President Jacob Zuma’s homestead, winning 53,9% of the vote.