Living in the shadow of denial 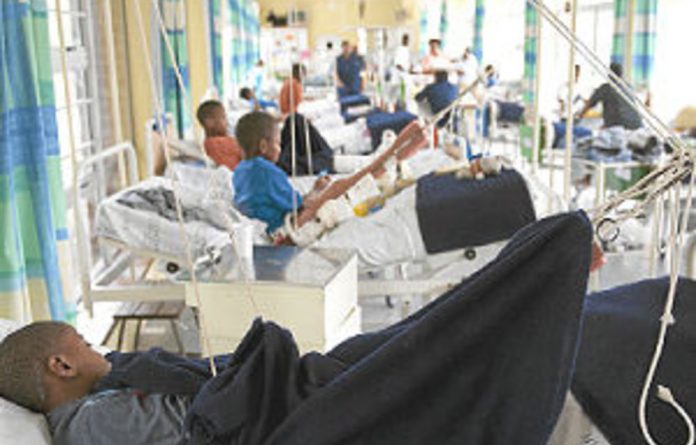 The Maitland Cottage Home for Physically Disabled Children is behind a brick wall in Newlands, Cape Town, not far from a cluster of expensive boutiques, a delicatessen and an up-market bakery selling French patisserie.

Passing drivers seldom notice the hospital’s brick wall or the sign that once read “Maitland Cottage Home for Crippled Children” before it was changed to be less offensive.

On a Monday afternoon I find five-year-old Unathi* in the boy’s ward. Including a sodden nappy, he weighs 10kg, roughly half what he should. His microcephalic forehead, bossed as the prow of a ship, is creased by a frown, and a thread of saliva joins his lower lip to the damp bib around his neck. His head is thrown back and his toothless mouth is stretched open in what may be either a smile or a frightened grimace. Deciding that he is smiling, I lean forward to grin into his face and he in return arches his neck and widens his mouth still further in response.

Unathi* is the unfortunate victim of a host of factors contributing to cerebral damage. Prematurity and perinatal infections are risk factors for cerebral palsy, and poverty predisposes children to both. An inflamed, irritable uterus in an underweight, anaemic mother with HIV in her blood, expelled him prematurely and, either in uterus or during his passage through an infected birth canal, he too acquired the virus he will never be rid of.

HIV not only predisposes a baby to concomitant viral infections, it can also cause direct cerebral damage and permanent cognitive deficits of its own. Although not every child with HIV will have cerebral palsy or other brain damage, it increases the risk. In Unathi’s case, his brain never stood a chance.

In the operating theatre I hold a mask to Unathi’s still smiling, or perhaps now grimacing, face and begin to induce the anaesthesia that will allow an orthopaedic surgeon to operate on his legs and feet, injecting Botox into spastic muscles and surgically lengthening and transferring deformed tendons. Often the surgical goal is simply to make it easier for caregivers to change nappies on these children.

As my patient drifts off to sleep, the surgeon discovers, while manipulating a stick-thin limb, that the boy’s left hip has spontaneously dislocated and he makes a note to book a further operation.

Without intervention, up to a third of children born to HIV-positive mothers will contract the disease. Department of health guidelines from 2 000 for the management of HIV-positive women in pregnancy recommend Caesarian section, termination of pregnancy, the use of vaginal douching in labour and the avoidance of breast-feeding.

AZT, already proven to reduce viral transmission rates dramatically, is not mentioned. Nkosazana Dlamini Zuma, in her role as the then health minister, opposed the use of antiretroviral (ARV) drugs in pregnancy on the grounds of cost, arguing that the government preferred to focus its efforts on prevention, while failing to see perinatal ARVs as an extremely effective form of prevention or to consider the high cost of treating an HIV-positive child.

Dlamini Zuma was replaced by Manto Tshabalala-Msimang and in the dark, Mad Hatter, beetroot and garlic days that followed, the Presidential Aids Advisory panel included among its members people who called themselves dissidents, as if they were opposing an oppressive regime rather than refuting evidence-based medicine. Tshabalala-Msimang threatened doctors found providing the treatment to women in labour with disciplinary action or dismissal. Only after civil society took the government to court were guidelines governing the prevention of mother-to-child transmission (PMTCT) changed in 2002 to include Nevirapine, a low-cost, less effective option than AZT, with significant resistance risks.

But, because of delays in implementation, 30% to 70% of HIV-seropositive women were still not receiving even Nevirapine by 2006. Unathi’s mother was one of them. PMTCT protocols were later changed to include eight weeks of AZT, theoretically decreasing transmission rates from the 8% on Nevirapine alone to 5%. In 2010, following 2008 World Health Organisation guidelines, AZT and Nevirapine coverage has now been extended to commence at 14 weeks of gestation, rather than the third trimester, and for extended Nevirapine prophylaxis to be given to breast-feeding babies.

Furthermore, pregnant women will now begin full treatment at CD4 counts of 350 rather than 200. If properly implemented, these measures could decrease transmission rates to less than 3%. A recent report by Professor Gayle Sherman at the National Health Laboratory Service that looked at infant blood tests shows progress. Transmission rates are falling. In the Western Cape and Gauteng, where about 70% of HIV-exposed infants younger than two months old are tested, early transmission rates have fallen, in the Western Cape, from 5,3% in 2008 to 3,5% in 2010 and in Gauteng from 7,9% in 2008 to 4%.

However, of the estimated 258 000 infants born annually in South Africa to HIV-positive women, only 55% are being tested early (ie by two months of age) or at the appropriate time.

Without ARV therapy 40% of infected children will not celebrate their first birthday and few will live beyond the age of four. For this reason current guidelines recommend starting treatment early. By mid-2008, according to a report by Dr Leigh Johnson at the Centre for Infectious Diseases Epidemiology and Research, there were an estimated 598 000 children in South Africa under the age of 15 living with HIV, only 51 000 of whom were on ARVs. A further 262 000 children were eligible for treatment but were not receiving it and, from mid-2007 to mid-2008, 44 000 children died of HIV-related causes. Almost a third of them were younger than a year old.

It is only in the past few years that HIV-positive children have begun to arrive at Maitland Cottage Hospital where I work. They all take ARVs. Many of these children failed to receive PMTCT, but later had access to treatment. The health minister in charge when they contracted the virus has since passed away, and Thabo Mbeki is no longer president.

But looking at Sherman’s data I see reason for hope. And when I talk to infectious-disease doctors at the Red Cross Hospital, they tell me that the flood of sick children they once treated is now slowing because of effective PMTCT programmes. This is good, but it can be even better.

I meet eight-year-old Kwezi when he is admitted to Maitland Cottage for an operation. He is small for his age, wiry and with an infection-scarred skin. He gives me a courageous but realistically wary smile. Both he and his mother have taken ARVs regularly for several years and once his twisted legs have been surgically straightened he will no longer crawl, but walk upright and go to school. His mother sits beside him, looking tense and unhappy. I discuss Kwezi’s anaesthetic with her and then I gesture to the active toddler playing at her feet. I ask: “How’s your little one?”

In her response I see a reflection of her feelings for her older son’s illness. Her body relaxes, joy spreads across her face. She beams. “This one is fine,” she says. “I took treatment.”

Martinique Stilwell is a doctor and a writer. She was involved in the early stages of the Western Cape ARV rollout programme