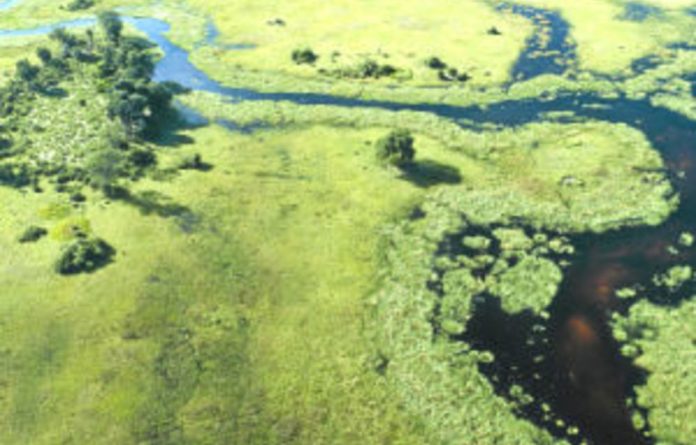 The Okavango Delta is a beguiling place. In summer, tropical storms rumble and flash across the high Benguela Plateau in central Angola. Water pours off steep slopes, gathering sand, leaching salts from the sodden earth and picking up speed as it gutters down long, straight valleys. By the time it reaches the northern border of Botswana it has become Southern Africa’s third-largest river.

Here the staggering 11km³ of water a year flows into the Okavango Panhandle, heading for the Gumare Fault. Beyond this halt to its southward rush it spreads out into a massive delta which, on Google Earth, looks like the leg and claws of an eagle, or a great green cannabis leaf.

Moving relentlessly across 16 000km² of flat Kalahari Desert, and with nowhere else to go but onward until it’s sucked up by evaporation, the flood takes six months to fill the Okavango’s furthermost channels and, in good years, reaches Maun.

But all is not well among the 50 000 islands, clear channels and countless creatures in one of the most bountiful wildlife areas on earth. An aerial survey, commissioned by the Botswana department of wildlife and national parks, and undertaken by Michael Chase and Kelly Landen of Elephants Without Borders, has found 11 species in serious decline in the delta. Comparing surveys going back to 1993 wildebeest numbers are shown to have shrunk by 90%, giraffe by 65%, tsessebe by 83%, lechwe by 58% and zebra by 53%. Also down about 80% are warthog, kudu, roan and ostrich. From 1999 to the present — a period of only 10 years — the running average for total species decline is about 61%.

“There’s a catastrophic loss of wildlife,” said Chase, “and we cannot be certain about why. But one thing is clear from the survey — the delta’s wildlife is in trouble.”

According to the report, the species decline is the result of “a complex mixture of local causes”, including human encroachment, game fences and poaching. Another factor could be fire. Much of the area surveyed in the late dry season of 2010 was burning.

The most potent factor, however, is seen to be drought. With torrential rain and flooding across the region this year, it’s hard to imagine this being the cause. But using rainfall data from the 1920s, the survey found that the decline of animals coincided with the onset of a long, dry cycle starting in 1980 — the most severe ever recorded — which has only just broken. During that time, the Okavango River water flow rates were the lowest since records began.

But elephants and hippos are bucking the downward trend. Hippos have increased steadily, at 6% a year, and the elephant population is holding steady. “We found the number of elephants in northern Botswana has stabilised at about 130 000,” said Chase. “One reason is that they’re returning to Angola.”

Jonas Savimbi’s troops are thought to have slaughtered about 150 000 elephants for meat and to finance Angola’s civil war by selling ivory. All the rhino went the same way. When Elephants Without Borders surveyed strife-torn Luiana National Park in 2001, there were 38 elephants; in 2005 it had jumped to 3 000; and by 2008, the count was 8 000. How did they know it was safe to return to Angola?

“The country is remembered by a generation of elephants still alive today,” said Chase. “They recognise the pathways to food and water and the timing of seasons. They remember where the hunters are. In a sense, they’re Angolan refugees returning home.

“The bulls are the scouts, leaving the vicinity of Botswana’s conservation areas on exploration journeys. They move from the delta up the Kwando River, streak across the Caprivi at night and into Angola. They find it’s pristine, with few people. There are thought to be millions of landmines in south-east Angola. I don’t know how they avoid them — probably by smell — but they do. Then they return and fetch the ­family herds.”

The distance elephants walk is staggering. Chase and Landen have tracked a collared elephant that covered 32 000km in two years, the greatest distance ever recorded for the species. “They look for food and water,” said Chase. “But they’re also searching for peaceful sanctuaries far from humans.

“For elephants to survive, we need to identify safe corridors, linkages between areas, networks, dispersal areas, transfrontier parks. We need to let their movement draw the lines which define wildlife ecosystems. There’s not much time left. Their future is in our hands. We have to get it right and do it now, while we still have the opportunity.”

The survey suggests that many of the threats to animals come from hunting, fence-related deaths, habitat fragmentation and poaching outside the reserves. It notes that, if the current problems persist the populations of large plains game in northern Botswana are likely to remain low, while the wildebeest and tsessebe populations could collapse altogether. The only way to monitor, it says, is to conduct regular aerial surveys. In this way, wildlife managers will be able to track population dynamics, set priorities and focus on the species most in need of attention.

Don Pinnock
Don Pinnock is a freelance writer and photographer. He is the former editor of Getaway magazine.
Facebook
Twitter
WhatsApp
Linkedin