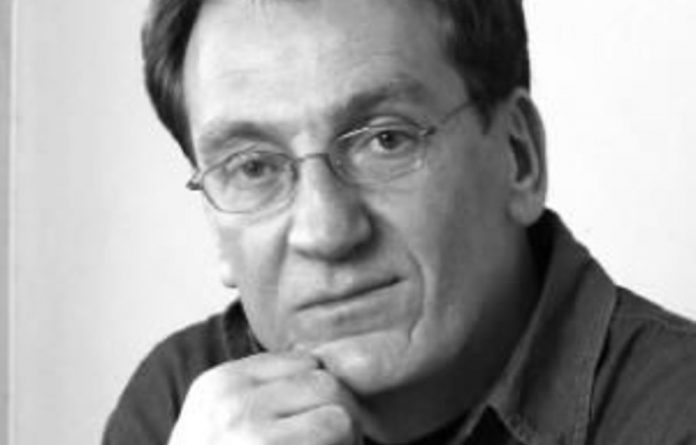 Double Negative is a three-part novel with a first-person narrator and Vladislavic is once again on familiar ground, seeing Johannesburg through the eyes of dropout student and aspirant photographer Neville Lister.

Like his 2007 UJ Prize-winner, Portrait with Keys: Joburg and What-What (Umuzi, 2006), Double Negative constantly wrong-foots the reader. In a memorable scene from the first part of the novel, visiting British photographer Saul Auerbach and the young Neville, tagging along in what would nowadays be called a stint of “work experience”, sit on a koppie overlooking Bez Valley and from the maze below randomly pick out a house each, which they will then visit and whose inhabitants they will photograph. This is something David Goldblatt did (which Vladislavic recalled reading about), but the event is recast with Auerbach in the main role and Neville as a witness. The effect of this cluster of devices in the book is to make the real unfamiliar and to invest the fantastical with the grit and texture of the real.

The three parts of the novel offer Vladislavic a set of historically ranged prisms through which to view his protagonist’s oblique and unheroic engagement with South African history. The first part, “Available Light”, is set in the late 1970s and early 1980s when foreign visitors would still book into hotels overlooking Joubert Park and when a young white man could walk through Hillbrow from end to end before sitting down for a beer at the Chelsea Hotel or visiting the nearby Exclusive Books. South Africa’s multiform history is framed by the narrator’s narrow, insignificant life.

The larger currents of history brush against the threads of this life, shaping them inexorably, while they in turn make their own minuscule reciprocal contribution to history itself.

Vladislavic’s gift is to make the everyday remarkable and to render the complex accessible. Take this mini-portrait of youthful experience: “Young people learn things intensely. They’re impressionable, we say. The proper image is not a tabula rasa, we are not written upon or etched or branded, but moulded from a substance already dense with thought and feeling. Our teachers reach into us, skilfully or clumsily, it’s the luck of the draw, and shape this substance, they make ridges there, hollows and curves, and perception runs over them, bending to the contours, breaking against the sharp edges repeatedly, until they are as familiar as the roof of your mouth to your tongue.”

In “Dead Letters”, set in the mid-1990s, we see a version of the truculent and contrary Aubrey Tearle (in Vladislavic’s novel Restless Supermarket): “The end of apartheid put my nose out of joint, I must confess. Suddenly the South Africans were talking to one another. They wouldn’t shut up — After a decade of wilfully excluding myself, I felt left out of the club.”

Yielding to an impulse to visit the house he had picked out in Auerbach’s company but had not then had the courage to enter, Neville rings the bell and introduces himself as a historian who is researching the life of a boxer who once lived there. This spontaneous lie soon becomes the proverbial albatross, but not before Mrs Pinheiro, the occupant of the house, weaves a few of her own fabrications. But the centrepiece of this part of the novel is the collection of dead letters she has — undeliverable letters that were dumped in the postal depot where her former tenant (and lover, it turns out) worked.

This is fertile Vladislavic ground: the odd, the piquant, the bizarre, the all-too-believable surreal. Mrs Pinheiro (not really her name) opens one of these long-dead letters “and a prison cell folded out of the silence, a small bare room with walls of the same pale green as the envelope. A man lay on his side in the far corner with his back turned to us. She folded him into an upright position against the wall and pressed a fingertip to his brow. He was shivering. With a sweep of her hand, she smoothed his damp, bloodied body out against the table and raised him to his feet.”

With such hopeless acts of restitution this obscure redeeming angel of Bez Valley attempts to right distant and fading wrongs.

Set in the near-present, “Small Talk” is the novel’s third section and Neville is now the subject of journalistic interest. But this is the multimedia moment and the interviewer inevitably asks Neville to restage their meeting (reopen his door and regreet her) for her digicam — all, of course, in the interests of spontaneous realism. “Shit,” Neville muses disconsolately, “five minutes and I’m already being asked to play myself.”

Double Negative/i> tells a compelling enough story, but carries in its narrative fabric oddments and fascinations that rival the main storyline for the reader’s attention. More deft, effortless and funny than my sketches here perhaps suggest, the novel shows one of South Africa’s foremost writers in full flow.

Running for African Booker
David Medalie, shortlisted for the UJ Prize is also in the running for the Caine Prize for African Writing. His short story, The Mistress’s Dog, from the collection of the same name, vies with four others, including fellow South African Tim Keegan’s What Molly Knew, for the so-called African Booker.

After a week of public readings and interviews in the United Kingdom, the Caine winner will be announced at a ceremony in the Bodleian Library at Oxford University on July 11.
The winner will receive €10 000 and one month’s residence at the University of Georgetown in Washington.

The shortlisted writers and their stories are:

Haunting debut
Shaida Kazie Ali takes the UJ Debut Prize for her haunting Not a Fairy Tale (Umuzi, 2010). Set chiefly in Cape Town, the two-part novel tells the story of two sisters, the fair-skinned Salena and the darker Zuhra. It reaches back into the colour-conscious 1960s and 1970s and the themes of racial humiliation, enforced group areas and “passing for white” emerge.

The real terror is the violent father figure, who beats Salena for, among other things, consorting with dark-skinned boys. Salena retreats deeper into herself: “Salena learned early that neglect was preferable to being beaten, and that submission ensured neglect, so as a little girl she bit her tongue and cut her flesh until her body became perfectly silent.”

The uneasy feeling the reader has from the start of this dreamlike but disturbing Bildungsroman is that things will go awry. Salena is forced into an arranged marriage with a lawyer and falls asleep on the night before her marriage incanting “I don’t want to marry him, I don’t want to marry him”. The less-favoured Zuhra studies her way into a future very different from the one inflicted on her fair sister.

The novel is constructed in short narrative fragments — vivid glimpses of the two girls’ lives — that paint a coherent and absorbing portrait. Ali splices recipes, culturally adapted fairy tales and short, seemingly unrelated narrative fragments into her novel. The effect is to create a multilayered narrative, with Western folklore adulterated in rich and interesting ways by Muslim culture, all reinterpreted in Ali’s highly idiosyncratic way.

Its title notwithstanding, this is a fairy tale, albeit one with hard edges. In the end Salena smashes the mirror into which she numbly looked on her wedding day. A shard buries itself in her toad-like husband’s neck and this heralds the beginning of a new life for her. Immaculately written, rich and varied, this debut promises much.

‘Maslow before Bloom’ for teachers and their learners